PHOENIX — In a city filled with transplants, Arizona’s professional sports teams are left fighting for the fandom and support of those who have already pledged their allegiances to others.

Luring those who don’t have a particular rooting interest in the building is tough. Luring them to come back is even harder.

That’s why the Diamondbacks, Suns and Coyotes have implemented a student pass program geared toward college students.

Aside from the Cardinals, which have sold out every game since moving into University of Phoenix Stadium in 2006, Arizona teams have struggled to put people in seats. As both hovered near around the bottom of the standings last season, the Suns and Coyotes ranked 23rd and 30th, respectively, in their league’s attendance. 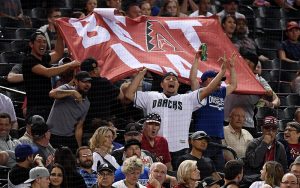 But even winning doesn’t fix everything. Despite sitting atop the National League West, the Diamondbacks rank 17th in Major League Baseball in average home attendance. The 26,911 equates to filling just 55.3 percent of Chase Field. The good news for the team is the figure is higher than any end-of-the-season average posted by the club in the past decade.

Engaging an audience is no small task. First, companies need to identify one, and then connect with it. Kenny Farrell, the Diamondbacks’ vice president of marketing and business analytics, said the team “really wanted to engage that 16- to 25-year-old audience.”

Lucky for him, and the other Arizona pro teams, approximately 72,000 prospectus fans in that age group are enrolled in one of five Arizona State campuses in the Phoenix metro area. Students at Grand Canyon University, which has on-campus enrollment of 21,000, also have access to these tickets.

“It was just an opportunity, we thought, would help engage that audience, grow our fan base, enhance attendance on particular days,” Farrell said.

Students can buy and access their tickets directly from their phone.

The app-based technology allows the teams flexibility with game selection, prices and blocking seats. It also requires minimal advertising because when students sign up and register to the database, they receive a text each time the deal is available.

The Coyotes offer their Papa John’s Student Rush promotion to select games, Vice President of Ticket Sales Bill Makris said. The Suns’ director of marketing and brand strategy, Christopher Kaiser, said that they offer their student pass for every game to give customers consistency.

The Diamondbacks have thought about doing the same, Farrell said, but decided doing it for only specific times creates a different culture and vibe, something even the players noticed.

“There was a game earlier this year where (Diamondbacks reliever) Archie Bradley specifically called out the left-field bleachers as something that really inspired him,” Farrell said. “And that was all of our student-pass seating. I would just be concerned that you would lose that by offering it every game”

The Diamondbacks offer the student pass on Tuesdays and Fridays but will add Saturday or Thursday games if there’s demand and availability.

The team often blocks out 2,000 seats in the right-field bleachers for the Tuesday student pass offer. The Suns try to free up 200 to 500 seats per game. (Kieser said the team only offered 50 tickets for the Warriors game last year.) And while Makris didn’t provide a specific number, he said the Coyotes have never run out.

Makris’ philosophy on the pass changed in the last few years. He said the Coyotes’ Papa John’s Student Rush was around before he joined the team five years ago. Just recently, too, they transitioned to the app-based model other teams use now. Before that, students would line up at the box office and get rewarded with a free medium pizza coupon from Papa John’s.

They also only offered $25 lower-level tickets — far more expensive than then $5 to $20 price range the Suns’ pass offers and the Diamondbacks as well, which is under $10 — but two years ago, the Coyotes wanted to offer a cheaper option.

“What do you think happened?” Makris asked. “A lot of people chose the $30 (seats) — over 70 percent of the sales were lower level. It’s not in essence price. They knew they were getting a phenomenal value and they still went for the $30 because they knew they were sitting lower-level.”

All three teams acknowledged the student pass is less about the money and more about connection.

The Diamondbacks, Farrell said, want to “engage that 18- to 25-year-old with an opportunity to make sure they can continue their fandom on their own,” noting that people are more likely to come to baseball games when they’re more established.

Added Kaiser: “It’s really not a financial play at this point. There’s 70,000 college students in the Valley right now. Some of them are from the state and have interacted with the brand before and are familiar with it but there are also a portion of those who are out-of-state students who are going to come here and come to this market and stay here for many years to come.

“So it’s just, really the big play there is to try to get them to have an allegiance to our brand moving forward and be fans for life.”