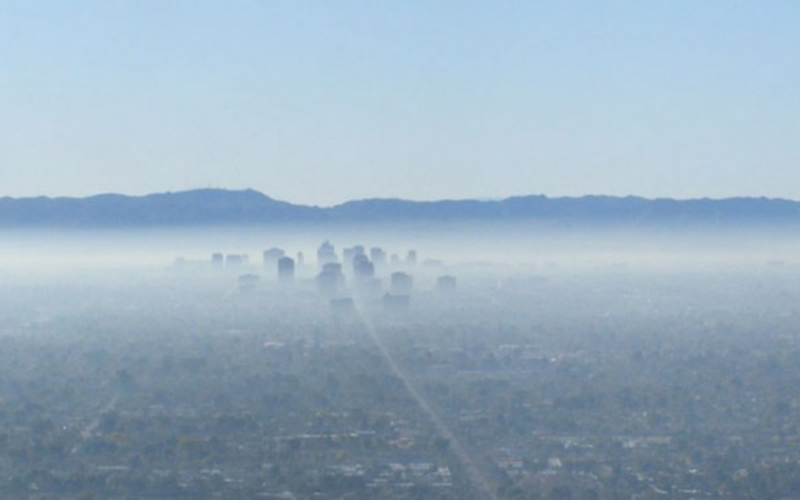 Ozone is a problem in metro Phoenix, particularly during our long, hot summers. (Photo courtesy of the Arizona Department of Environmental Quality)

PHOENIX – In the land of year-round lawns, gasoline-powered mowers are ubiquitous, and they’re a major source of the ozone and other pollutants that foul our air, experts say.

To address the problem, the Maricopa County Air Quality Department has partnered with the Arizona Department of Environmental Quality to persuade homeowners to switch from gasoline to battery-powered lawn mowers. The Mowing Down Pollution program gives Maricopa County residents a $150 voucher that can be applied to the purchase of an zero-emission battery or electric lawn mower if they exchange their gas-powered machines at one of eight locations.

In 2016, metro Phoenix recorded more than 110 days of “degraded” air quality, according to the Environment Arizona Research and Policy Center. Vehicle emissions are the prime source of the crud, but in a 2001 study, the American Chemical Society estimated that running a gasoline-powered lawn mower for one hour can produce the same amount of air pollution as a 100-mile ride in a car.


More than $300,000 has been allocated to Mowing Down Pollution, and the goal is to replace 2,500 gas-powered mowers by the end of the year, said Bob Huhn, spokesman for the county’s air-quality department. So far, 895 people have applied for the program and 474 vouchers have been claimed.

Hanna Valenzuela, a spokeswoman for the county, said the goal “is to reduce 21 tons of ground-level ozone pollution.”

Just as the push for electric automobiles is being hailed as one way to address the increasing amounts of “smog-forming pollutants,” the Mowing Down Pollution program applies the same logic to lawn mowers. The program, which began June 4, is the latest in a series of projects devoted to fighting air pollution.

Huhn said one way to improve air quality is to change our everyday behavior through small acts that benefit the environment.

“This summer, we have been having issues with ozone,” he said. “Part of that is because we have a long, hot, dry summer.”

This is the county air-quality department’s third incentive program to combat air pollution. It ran a pilot program to update wood-burning fireplaces by installing devices to reduce smoke, and another to update fire pits. The county hopes to expand the Mowing Down Pollution program to other gas-powered lawn-care equipment, such as leaf blowers.

Correction: This story has been updated to correct the amount of ozone produced by lawn mowers.