The U.S. performed more than 100 above-ground nuclear tests in Nevada over 12 years during the Cold War, emitting radiation that sickened “downwinders” in Arizona and other Western states. (Photo by Jessica Boehm/Cronkite News) 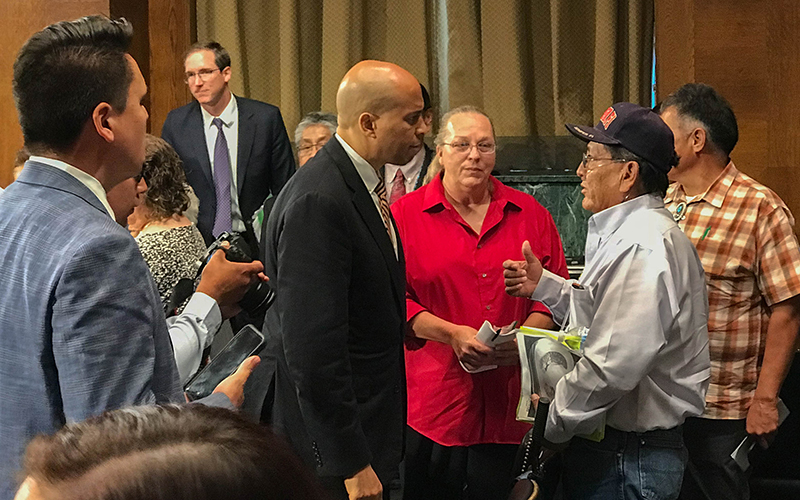 Leslie Begay, a Navajo miner with lung problems he says came from uranium mining, speaks with Sen. Cory Booker, D-New Jersey, after a Senate hearing on a bill to benefit “downwinders.” (Photo by Bryan Pietsch/Cronkite News)

Navajo Nation Vice President Jonathan Nez told the Senate Judiciary Committee that current rules making it difficult for members of his tribe to apply for “downwinder” status need to be changed. (Photo by Bryan Pietsch/Cronkite News) 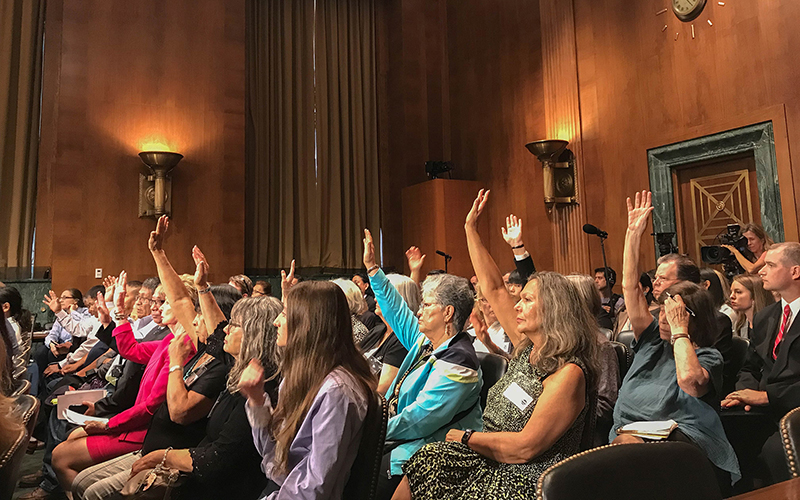 Audience members at a Senate hearing on a bill to compensate “downwinders” – people affected by radiation from nuclear testing in the West – raise their hands to show they’re downwinders. (Photo by Bryan Pietsch/Cronkite News) 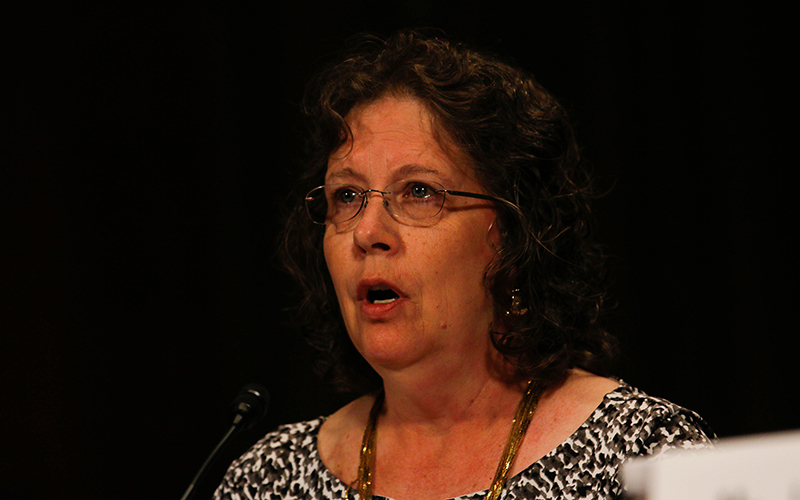 Eltona Henderson of Emmett, Idaho, a state that could be added to those eligible for “downwinder” compensation, said nuclear testing turned her “Valley of Plenty” into a valley of death. (Photoy by Bryan Pietsch/Cronkite News)

“I had a good job supporting my family,” said Leslie Begay, a uranium miner who said he faces high medical costs from a lung illness he developed in the mines.

“I am totally down to nothing, almost,” Begay, a Navajo, said after the Senate Judiciary Committee hearing. “I have to borrow money and it really has a big impact on me.”

The committee was considering a bill to expand the Radiation Exposure Compensation Act, which compensates miners who worked before 1972 in 11 states. The act also covers residents of affected counties in three states, Arizona, Nevada and Utah. Affected counties in Arizona were Apache, Coconino, Gila, Navajo and Yavapai. 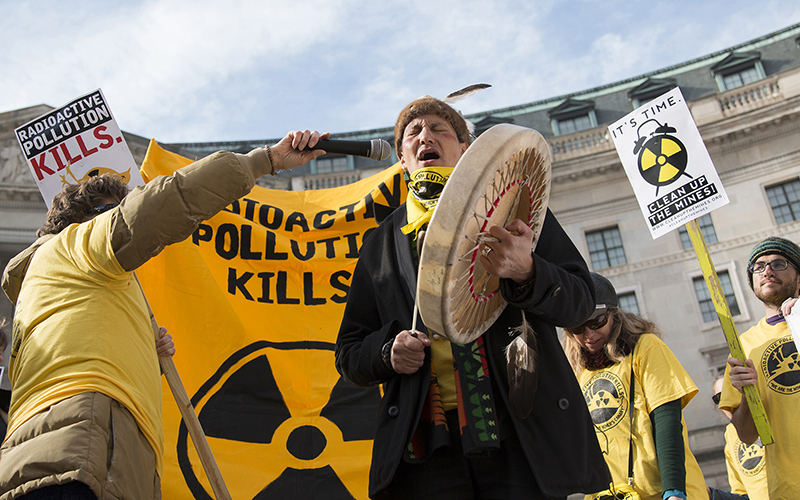 Those counties were downwind from areas where the U.S. conducted nuclear tests from 1945 to 1962. Wind spread radiation across the West, contaminating the environment many depended on for food and water and causing serious illnesses in many.

The bill considered Wednesday would expand eligibility to uranium miners who worked after 1971 and downwinders in Colorado, New Mexico, Idaho and Montana. It would also increase the maximum potential compensation from the current $100,000 to a new cap of $150,000.

Eltona Henderson, director of Idaho Downwinders, told the committee that cancer is a multigenerational issue in her community. Henderson, who was diagnosed with cancer two weeks ago, choked up as she testified.

“I have 38 people in my family who had cancer. Fourteen have died,” she said. “We were unknowing and unwilling participants in the Cold War. But we’ll never have flag-draped coffins at our funerals.”

Henderson said her hometown of Emmett is known as the Valley of Plenty because of its agricultural richness.

“Because of nuclear testing, our Valley of Plenty is now the valley of death,” she said.

Begay was not a downwinder, but said he suffered, too, along with others in his community. Begay, who drove from Arizona to Washington because his oxygen tank was not allowed on the airplane, said one of his friends from the mine poked fun at the tank.

“It happened to me. They took me to the hospital…. I couldn’t go back to work,” Begay said.

Phil Harrison, who works for Giving Home Health Care, which specializes in uranium miner care covered under RECA, said that medical problems faced by Begay and others can be compounded by the lack of health care facilities on the reservation.

“We don’t have specialized physicians that can treat their lung disease. There are no hospitals – specialized hospitals – that exist nearby on the Navajo Nation,” Harrison said.

Even getting signed up for compensation can be a challenge on the reservation, said Navajo Nation Vice President Jonathan Nez, who called on the committee to expand the types of documents accepted to prove residency.

“Many of our addresses in tribal communities are post office boxes and not physical addresses,” Nez said. “The verification process is really cumbersome and restrictive.”

Harrison said that these difficulties prevent many downwinders and uranium miners from getting compensation they need for medical expenses.

“They lack resources, they don’t have running water, they don’t have electricity, so they’re silently just suffering,” said Harrison, who noted the irony of Native Americans having to prove they live on land the government put them on.

“It’s really unfair for the government, the Department of Justice, to (make us) prove that we live in these designated areas,” he said. “Hopefully with the amendment this will ease a lot of problems and will help a lot of people.”