PHOENIX – Problems can’t be managed unless researchers have accurate measurements.

For example, would planting a million trees reduce the ambient temperature in Phoenix by a tenth of a degree Fahrenheit or 10 degrees Fahrenheit? Researchers would need valid data to answer that question, said David Sailor, director of Arizona State University’s Urban Climate Research Center.

To better determine the effectiveness of heat-reduction efforts, the center recently partnered with Valley Metro to equip 10 buses with advanced sensors to collect temperature and humidity data in a methodical way from a variety of areas around the Valley.

“The measurements that we’re doing across Phoenix right now certainly help in terms of understanding the spatial and temporal variation of thermal environments,” Sailor said.

“The idea that when it’s extremely hot out, people get sick, people die.”

Domes housing the battery-powered sensors are placed on top of the compressed-natural-gas powered buses, away from the waste heat of the vehicles’ air-conditioning system. Air moves through two openings in the dome, producing more accurate readings. 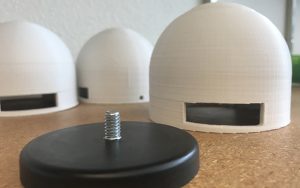 As the buses move across the city, the sensors capture a good signature of data because the vehicles have fixed routes and operate through a large portion of the day, which can help determine and reduce adverse health outcomes. The buses circulate through south Phoenix, Scottsdale, Tempe and north Phoenix, providing a range of data from urban, suburban and rural environments.

Sailor hopes to expand the project by adding sensors to 10 more of Valley Metro’s 400 buses and provide a nationwide online resource for other cities to monitor their thermal environments in real time.

“”We are very interested in giving back to the environment as much as we can do,” she said.

“The buses in particular run on compressed liquid natural gas, so this is just another step in helping find out as much as we can about our local environment.”