Los Bandidos is a fan group for Phoenix Rising. They sit behind the south goal and chant throughout the match while singing and beating drums. (Photo by Josh Martinez/Cronkite News)

SCOTTSDALE – In its quest to join Major League Soccer, Phoenix Rising FC continues its push to grow its brand locally, and that includes tapping into the area’s large population of Latinos.

Maricopa County is home to just more than 1.3 million Latinos, slightly less than a third of the county, according to 2017 U.S. Census estimates. With a large Latino population comes a love for soccer.

“Being Hispanic, (soccer’s) basically in our blood,” said Gabriel Hernandez, 34, a Rising fan from Phoenix.

Seventy-one percent of U.S. Hispanic sports fans surveyed in a 2017 study called “The Fanático” said they are “the biggest soccer fan they know.”

Those interviewed by Univision Communications and Nielsen were Hispanics in the United States between the ages of 18-49 who watched more than one hour of television and three hours of sports content per week.

With numbers like these, Phoenix Rising Vice President of Marketing and Sales Sam Doerr said targeting this market is beneficial for the club in its pursuit of landing in MLS.

“It’s a slow build,” Doerr said. “We’ve got to gain their trust. We’ve got to be natural to the market. And we know that there are (Mexico’s top level) Liga MX clubs, the Mexican National Team that are always going to be more popular than us but we want to be another outlet and an option for them.”

MLS has committed to adding two more teams as part of its recent expansion efforts after the league granted Cincinnati a team. Phoenix Rising has submitted a bid for one of those two spots and has produced renderings for a $250 million, 21,000-seat stadium.

Doerr said the club has increased its exposure in the Phoenix metropolitan area’s Latino communities by visiting local stores to give out free team items. The team also hosts soccer camps and clinics in these communities. 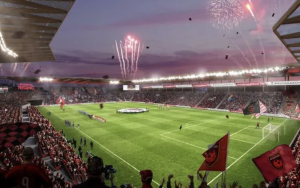 The club makes many other efforts, from public appearances in predominantly Latino school districts to working with local leaders such as the Hispanic Chamber of Commerce.

Phoenix Rising also has plans to host watch parties for the Mexican National Team during the World Cup. These watch parties will be a partnership with El Patron and El Jimador Tequila, both Latino brands.

Jesus Islas, 29, a season ticket-holder from Avondale who was born in Obregón, Sonora, Mexico, has fond memories of the World Cup and the Mexican National Team and watch parties would resonate with him.

“To do that is only going to increase the fan base for Rising for even just thinking of doing that and creating an experience for something that us as Latinos value,” Islas said.

Heber Valenzuela, who works in community/partner relations for the Rising, said when he travels to local Latino communities, the residents show a genuine interest in the club, asking about future events and matches.

“Those things let us know that people are watching, people are seeing our team, coming to our games and we are doing the right things,” Valenzuela said.

Another move that resonated with local Latinos was last year’s signing of Omar Bravo, a standout from the Mexican National Team and Chivas Guadalajara of Liga MX, Mexico’s top league.

Though Bravo only played for Rising last season, local Latinos were energized about the team.

“I freaked out because, being from Mexico, he’s a hero,” Islas said. “He scored in the World Cup and I thought, ‘Oh my God, this is getting exciting.’ ”

As popularity has grown among Latinos, so has a fan group called Los Bandidos, a primarily Latino support group.

Los Bandidos gather at home matches and lead cheers, chants and songs. They also wave big flags and beat drums throughout the competition.

Hernandez, who stands in the Bandidos section during matches, said the style is similar to the South American Barra Brava style of cheering, which is constant songs and cheers throughout the match.

Hernandez has friends who don’t speak Spanish who stand in the section and sing along in Spanish, he said. Los Bandidos also practice new chants before matches for new fans to the group.

With Rising’s new facility on the horizon that is triple the size of its current capacity. The Latino community could help in filling those seats, he said.

To help increase that popularity among Latinos, Doerr said the future holds more watch parties closer to Latino communities, shuttles from those communities to matches and involvement in Latino youth soccer.

Valenzuela said the Latino community is important to the team and the team will continue making plans to engage them.
“Why? Because that’s important to our community and we want to continue building those bridges,” he said.