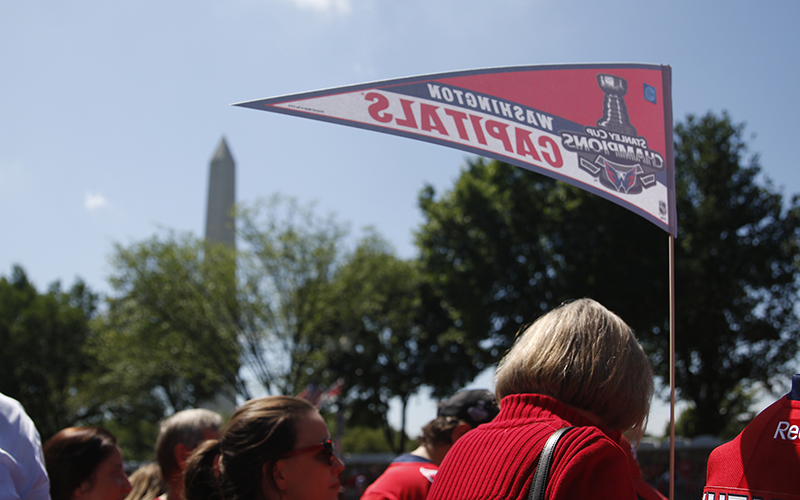 Police reported few problems with the thousands in the crowd who were “jubilant and showed no ill will” at the upbeat, festive parade to honor Washington’s hockey team. (Photo by Sarabeth Henne/Cronkite News) 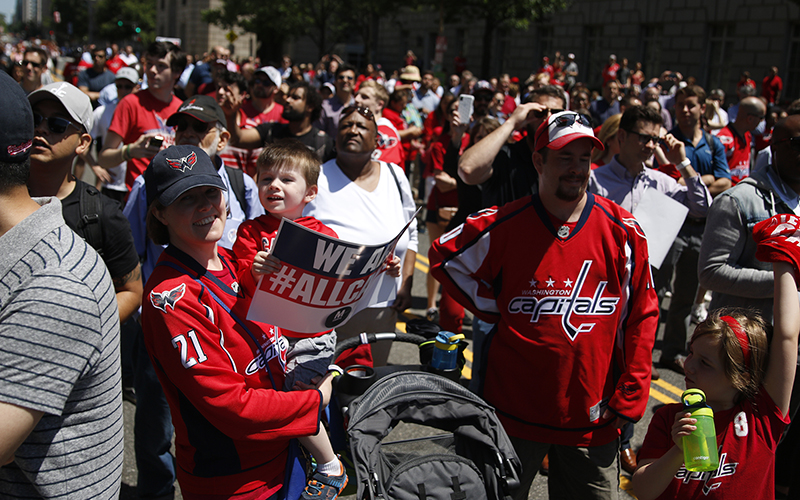 Tens of thousands of Washingon Capitals fans turned out to celebrate the team’s Stanley Cup win, the first championship in the 44-year history of the NHL franchise. (Photo by Sarabeth Henne/Cronkite News) 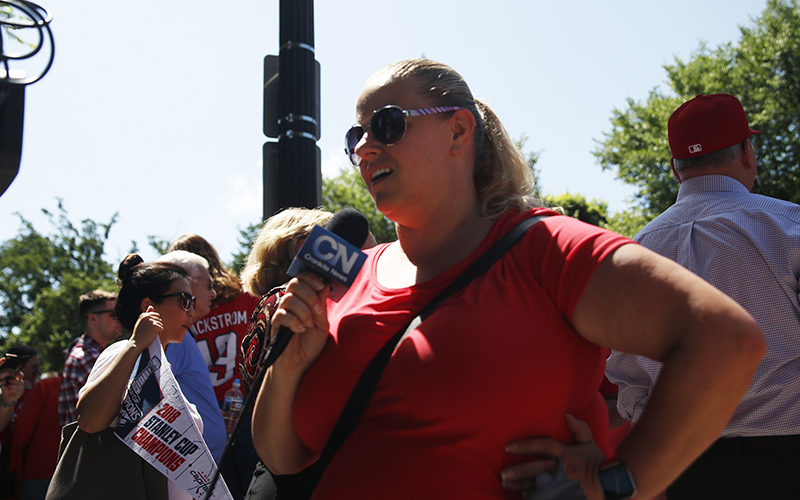 Linnette Klinedinst is a former Arizona resident who has lived in Washington for four years – long enough to be caught up in the excitement of the Capitals’ first Stanley Cup win. (Photo by Sarabeth Henne/Cronkite News) 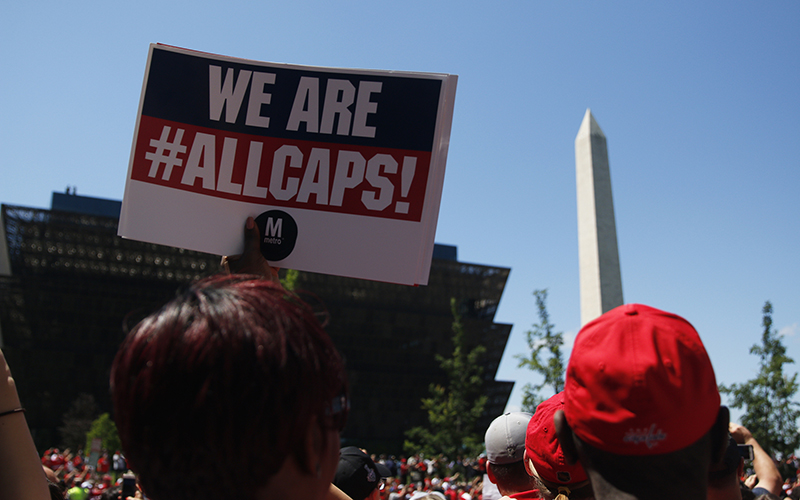 The Office of Personnel Management announced that federal offices would be open Tuesday, but it encouraged managers to allow workers two hours of midday leave to attend the Caps rally. (Photo by Sarabeth Henne/Cronkite News) 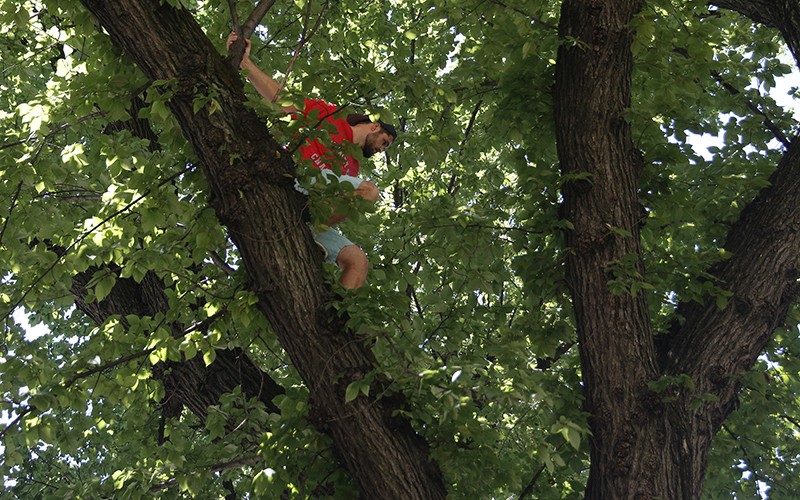 Spectators lined Constitution Avenue for the parade and packed the National Mall, with some perching on museum steps – or in trees – for a better view. (Photo by Sarabeth Henne/Cronkite News) 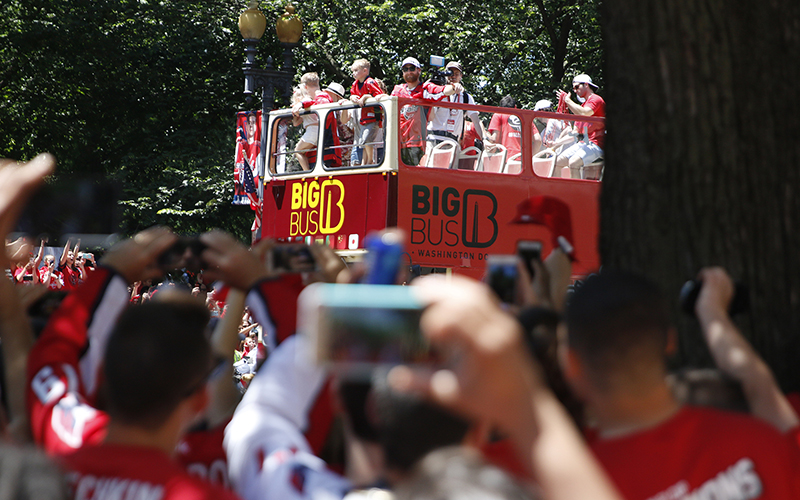 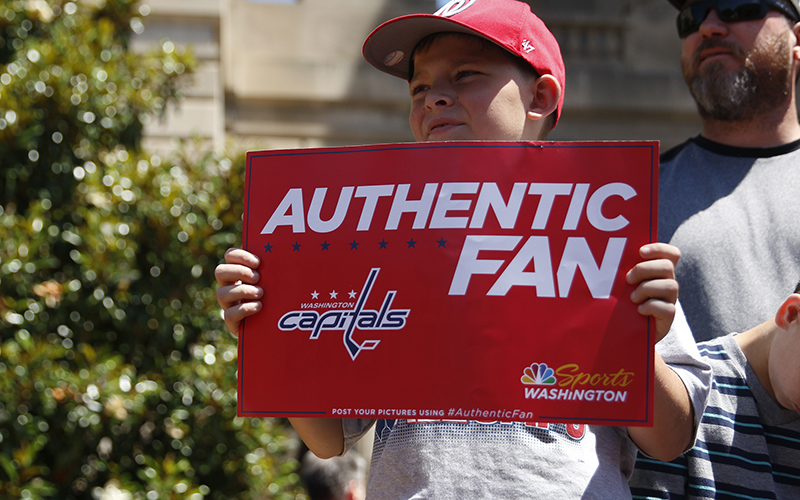 It’s been 26 years since long-suffering fans of Washington sports have been able to celebrate a major sports championship, a lifetime for many in the crowd Tuesday. (Photo by Sarabeth Henne/Cronkite News)

WASHINGTON – Tens of thousands of Washington Capitals fans celebrated the team’s Stanley Cup victory Tuesday – but not all of those cheering were Washingtonians.

“I was excited (when they won),” said Linnette Klinedinst, a former Arizona resident who has lived in the District for four years. “I stayed up later after traveling to watch it, and I was really excited to be able to get home in time to watch it (the final game).”

She was among the thousands who packed the National Mall and the parade route down Constitution Avenue, forming a sea of red-and-white jerseys under an almost-cloudless periwinkle sky. They climbed steps of nearby office buildings and museums, and some climbed trees and lampposts, to get a better view of the marching bands and the buses carrying the Capitals – and the cup.

Martin Montorfano, an Arizona State University alumnus, was also in the crowd.

“I’ve lived in D.C. for, like, the last 18 years or so. I’ve been a longtime fan,” said Montorfano, who punctuated his conversation with chants of “Go Caps.”

Sirens blared and car horns tooted the staccato three beats that fans here recognize as “Let’s go Caps.” Confetti cannons popped, shooting neon streamers out over the streets where fans spun red towels above their heads. Echoes of the crowd could be heard from blocks away.

Monica Cruz, a native of Puerto Rico, said she came out to see the Stanley Cup with her own eyes.

“I just wanted to see the parade and the Stanley Cup,” said Cruz, from a vantage point on the steps of the National Archives. “I just started watching the games this year. My boyfriend got me into it, and he’s been a Caps fan for a really long time.”

Cruz said she was surprised that the Caps were able to win the series in five games.

“I was actually expecting us to go a little further,” she said. “It was amazing, really awesome.”

Police would not provide a crowd estimate, but the Metro system reported that subway ridership was up by about 132,000 as of 5 p.m., compared to the same time Monday.

The mood on the street was festive and police reported no problems.

“It’s a historic day for the city,” said U.S. Park Police Sgt. James Dingedein. “The crowd was jubilant and there was no ill will.”

Historic, indeed: This is the first championship for the Capitals in their 44-year history and the first major sports championship for Washington since a Super Bowl win 26 years ago. The Office of Personnel Management felt compelled to note that federal offices would still be open Tuesday, but encouraged managers to allow workers two hours of administrative leave in the middle of the day to attend the rally.

“It’s a historical moment,” said Ivana Grace, who said she was born and raised in the city. “I’m 26 going on 27, and in my entire lifetime … and growing up in the District, I’ve never got to see (a D.C.) professional sports team win any sort of championship.”

Grace added that the parade was an especially unifying moment.

“I’m sure for some people it is a shock to see a lot of brown people out here, because we’re not necessarily associated with hockey, but it goes way past that,” Grace said. “Just the respect level of everyone out here … and just trying to enjoy the fact that we as a city, as a D.C., Virginia and Maryland … we’ve won together. There’s a lot of unity amongst everyone from all different backgrounds here. It’s been amazing.”

The feeling was shared by some newcomers, too.

“I’m glad to have seen a team win here in D.C.,” Klinedinst said.