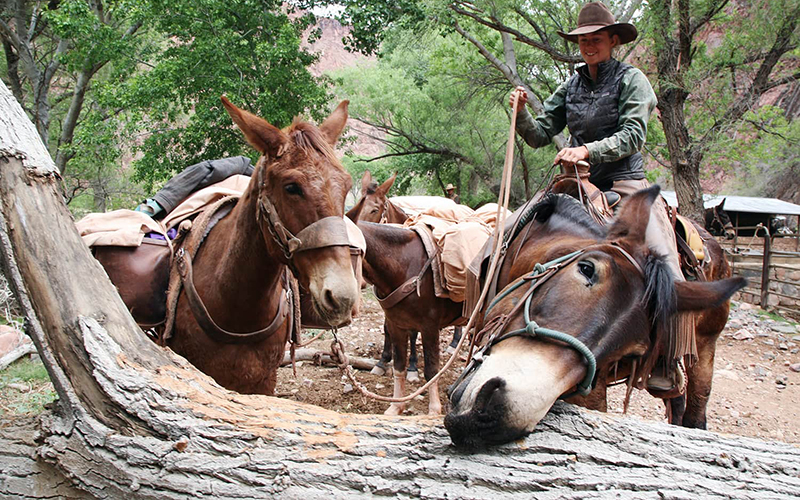 Xanterra, which also operates lodges on the South Rim, has about 150 mules that transport produce, people and basically everything else that Phantom Ranch – nestled along the Colorado River miles below the rim – needs to function. (Photo by Stina Sieg/KJZZ)

GRAND CANYON – Thousands of years ago, in what’s now Turkey, someone bred a horse with a donkey. The mule was born, and the sturdy hybrids soon were put to work across the globe.

Cars and trucks have replaced mules in most places, but the beasts of burden still reign supreme at the Grand Canyon.

This is especially true on the South Kaibab Trail, where young mule packers leading a lumbering line of the creatures, all carrying full bags, are an everyday sight. Supplies and souvenirs from the South Rim go down to Phantom Ranch, and trash comes up.
But that’s not the only cargo the mules carry.

On a recent afternoon, smiling tourists, each riding a mule, whooped as they crested the South Kaibab, returning from a one-night trip to Phantom Ranch, the bunkhouse at the bottom of the canyon. 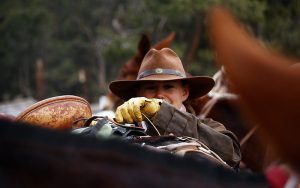 Wrangler Yvonne Parsons saddles up a mule on the South Rim of the Grand Canyon before leading a group of visitors down to Phantom Ranch. (Photo by Jackie Hai/KJZZ)

John Berry was there to greet them.

“It was wonderful!” one woman yelled as another howled like a coyote yipping at the moon.

With his bushy mustache and cowboy hat, Berry looks the part of a livery manager, who works with the mules for the park and resort management company Xanterra.

He gives a lot of credit to the wranglers who guide these trips, but he knows who truly makes the rides possible.

“I kind of think of a mule as a four-wheel-drive pickup truck,” he said, “where a horse would be more like a Cadillac.”

Mules are sure-footed and tough, Berry said, and they don’t spook easily. They’ve carried an estimated 1 million people in and out of the canyon since the late 1800s. The rides are daily, stopped only by dangerous weather and government shutdowns.

Berry was here when the government stopped running for two weeks in 2013.

“And these mules were so bored, out here in the corral,” he said. “They were fighting each other and kicking each other. They were just bored. I truly believe that they love to work.” And lots of people in the canyon love to work with them.

Josiah Dryer, a packer, grew up around horses and donkeys but describes himself as “a mule guy.”

As he strapped bags onto his mules behind Phantom Ranch, Dryer said he likes how intelligent the animals are. They don’t freak out on the trail, he said, and they don’t forget.

“If you do something to a mule, that mule will get you back seven years later, and you will know why it did that,” Dryer said. And he didn’t seem to be kidding.

Phantom Ranch maintenance man Joseph Kendall also can vouch for their smarts. He has befriended a giant pack mule named Kaibab Bob, who’s convalescing right now at the bottom of the canyon.

“Make sure you eat all that, all right?” he said, handing carrots and lettuce to the big mule.
Kendall brings him veggies every day – and brushes Bob. The mule was a little shy at first, but loving, he said. “He’s just a good guy,” Kendall said, smiling.

Kaibab Bob injured himself stumbling off the trail – as pack mules will, every once in a blue moon. That doesn’t happen to the mules that carry people, however. Berry tells new riders the same thing: In more than 100 years, these Canyon rides have never lost a visitor because of a mule.

During a recent safety talk, held right before the group headed down the trail, he was funny but frank.

“This is no pony ride at the county fair,” he told the crowd, huddled against the wind and cold of a snow flurry. “This is a tough, hard ride.”

He went over how to get the mule “to brake” and how to keep your cool by not looking down into the intimidating vastness of the canyon. By the end, a little girl from Boston was in tears. 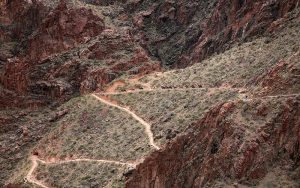 Visitors ride mules down Bright Angel Trail. Typically, wranglers take guests down this longer, less steep trail. When they ascend the next day, they’ll take the South Kaibab – the steeper trail the packers usually use. (Photo by Stina Sieg/KJZZ)

Within minutes, the girl summoned her courage. As Berry helped her onto her mule, her eyes were wet but she was trying to smile.

“Now, you take care of John S for me, OK?” Berry said, and she responded with a barely audible “OK.”

A few minutes after the group disappeared below the rim, Berry radioed one of the wranglers, who was riding just in front of the girl.

“She’s good,” a calm voice said over the receiver. “We’re talking about cats.”

A few hours of riding later, the little girl declared that someday, she wants to be a wrangler, too.