PHOENIX – Hungry, thirsty black bears are making their way from the wilderness into the city, and it hasn’t gone well for the animals. In the past week, the Arizona Game & Fish Department has put down three bears that posed threats to public safety.

“It starts with a curious, hungry bear just looking for some food, and they find some easily accessible and highly rewarding food in the terms of calories content,” Game & Fish wildlife biologist April Howard said.

Once a bear realizes it can easily eat in urbanized areas, it begins to lose its fear of humans, which makes a public safety issue.

“These bears that come into neighborhoods get used to human food and don’t have a lot of negative responses from humans,” Howard said, “so they start to lose their fear of humans, they don’t see us as harmful, and so eventually that could lead to them approaching humans in search of food.” 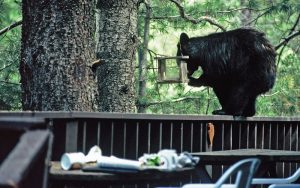 Black bears have made their way from the wilderness into the city, from Payson to the Arizona-Mexico border. (Photo by Arizona Game and Fish Department)

“That bear has associated humans with food and will eventually take food away from humans or decide that humans are food,” Cunningham said.

What most commonly lures bears into urban locations is garbage left outside. If fact, homeowners are 70 percent more likely to encounter a bear if they leave garbage outside, according to a study conducted by Pinetop-Lakeside in the 1990s.

If you see a bear in your neighborhood, Arizona Game & Fish officials recommend keeping pets inside and calling 911. Don’t approach it and don’t do anything that would encourage the bear to stick around. To keep bears from sniffing around your property, keep all trash inside a secure area, take bird feeders down at night and keep all food inside.

“All too often,” said Shawn Wagner, Arizona Game & Fish wildlife manager, “well-intentioned homeowners think they’re helping wildlife” by leaving out food and water. What they don’t realize, he said, is that “such activities are not only detrimental to wildlife, but they put everyone’s safety at risk.”