Over the past year, 12,600 construction jobs were created, according to the Arizona Office of Economic Opportunity’s May report. (Photo by Jenna Miller/Cronkite News)

PHOENIX – Arizona’s unemployment rate remains at 4.9 percent, while the national average is 3.8 percent, its lowest since 2000. State officials say our population growth could be behind the stagnation.

Employers added 223,000 jobs in May, according to the U.S. Bureau of Labor Statistics. Retail, health care, transportation and construction in particular have seen good growth over past couple months, it said.

Average hourly earnings, meanwhile, rose slightly in May. Wages have gained 2.7 percent in the past 12 months.

Danny Wilson of the Arizona Office of Economic Opportunity said the stagnant jobs rate is nothing to worry about. There are several factors involved in these calculations, he said, and the state is in solid shape for economic growth.

Maricopa County reflects the national average at 3.8 percent, while Yavapai, Greenlee and Pima counties are at 4 percent or a bit more. 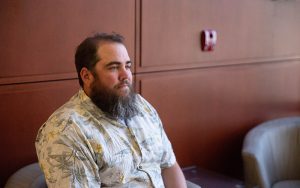 Danny Wilson from the Office of Economic Opportunity made it clear that numbers can be deceiving when working with demographics. (Photo by Conrad Romero/Cronkite News)

The construction industry added 12,600 jobs since last year, while the education and health care industry added 14,400 jobs in the same time frame, according to the bureau.

This population increase creates the stagnation that Arizona is experiencing: Unemployment numbers have hovered around 4.7 to 4.9 percent for the past six months.

The most important number in calculating the unemployment rate is the labor participation rate, Wilson said.

“Whenever you see this kind of increase in population and an increase in demand for jobs, you begin to see a kind of cycle that consistently balances itself out,” he added.