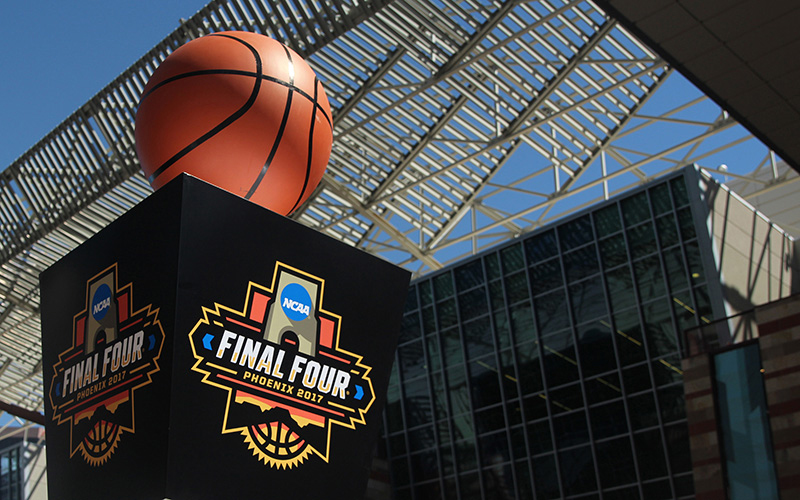 The NCAA was back in Phoenix Wednesday to listen to a pitch from a local organizing committee hopeful that it can land a future Final Four. (Photo by Tyler Drake/Cronkite News)

PHOENIX — In March, 2017, Tom Burnett arrived in Phoenix to experience the Final Four as a fan. He had visited many times before on business but had never seen the state come alive for a mega-event.

The Southland Conference commissioner and member of the NCAA Men’s Basketball Committee member was running out of adjectives on Wednesday to describe his experience. He lauded Sky Harbor International Airport for its proximity to the city. He raved about his hotel experience. And that drive out to Glendale that many locals dread? The Houston native found no issues with it.

Burnett was back in Phoenix, practically retracing his footsteps from 14 months ago. He, along with other NCAA officials, came to observe Phoenix’s bid for a future Final Four in 2024, 2025 or 2026. (The city did not bid on 2023 because the Super Bowl was awarded to Arizona for that year).

Led by the Phoenix Local Organizing Committee, the group of NCAA officials are touring hotels, proposed event sites — such as Margaret T. Hance Park, where the Final Four Music Festival was in 2017 and is proposed to be again — the Phoenix Convention Center, which hosted the 2017 Fan Fest, and University of Phoenix Stadium in Glendale, where the Final Four was played in 2017.

Phoenix is up against six cities — Dallas, Houston, San Antonio, Los Angeles, Detroit and Indianapolis — to host the four Final Fours. Each gets the chance to show off its Final Four plan to officials in its respective city before pitching its final presentation to the NCAA on July 11 in Boston. The future host sites will be announced shortly after that.

Debbie Johnson, the co-chair of the Phoenix Local Organizing Committee, didn’t sugarcoat the situation. She called it a competition.

“We certainly look at what those other destinations have. What are the pros, what are the cons that they all have,” she said. “And then what do we have? I can sit here, I’m very proud of our state, and I can say, ‘I think we win every time.’ ”

Johnson said although the organizing committee can’t see the bids for other cities, it has a good idea of what each city has and what it doesn’t. Overall, though, it’s a relatively blind competition. Johnson traveled to San Antonio for the 2018 Final Four and went through “way too many” pages in her notebook, jotting down information about all the things fans experience. 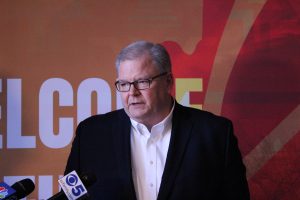 Southland Conference commissioner Tom Burnett was impressed by what he saw the last time the Valley hosted the Final Four. (Photo by Sam Hoyle/Cronkite News)

“We don’t care about the games. It’s not the game we’re going for,” Johnson said about her trip to San Antonio. “We’re going to look at logistics and operations and how do they handle this. Are there lines in their restaurants? What are the hotels like? How far is it to walk to the venue.”

She said it’s not so much tracking data but tracking an experience.

Fortunately for Phoenix, the experience of the 2017 FInal Four is still fresh in the minds of the NCAA and the organizing committee. Many of those working on bringing another Final Four to the Valley were responsible for the event heading to the West Coast for the first time since 1995.

The Phoenix Local Organizing Committee met with the NCAA just days after blue and white confetti dropped down on the University of Phoenix Stadium court, showering the 2017 national champion North Carolina Tar Heels.

The two sides talked and rehashed an event that generated a statewide economic impact of $324.5 million, according to a study by ASU’s WP Carey School of Business. Johnson said 99 percent of the feedback, too, was positive. And the one percent, she mentioned, was out of their control.

“The one percent is always going to be the distance between the stadium (and downtown Phoenix),” she said. “We don’t necessarily have the walkability that some destinations (have). But if you were in downtown last year for the Final Four it was unbelievable.

“People could walk from the Fan Fest to the Music Fest to the (Final Four) Dribble to the restaurants.”

The lack of walkability between city and stadium, though, is not just a Phoenix problem, Burnett said. He was quick to point out that both Houston and Dallas are both spread out. And in a competitive mega-event landscape, the 14 miles between the Phoenix Convention Center and University of Phoenix Stadium hasn’t stood in Phoenix’s way before.

Arizona has become a mega-event hub, having hosted Super Bowls, College Football National Championships and a FInal Four. For Burnett, that only helps Phoenix’s bid.

“I see it as what these big cities do,” he said.