PHOENIX – Rep. Martha McSally on Wednesday blamed the country’s lack of border security as one reason for Arizona’s opioid epidemic.

“The overwhelming majority of drugs, up to maybe 90 percent, come through the nation’s ports of entry,” she told the House Border and Maritime Security Subcommittee. “In order to mitigate these illicit paths … We must secure the border and strengthen our postal system.” 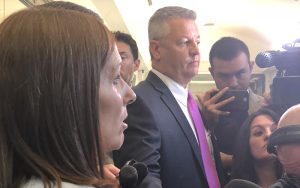 Rep. Martha McSally discusses the opioid crisis in Arizona with reporters on a break from a House Border and Maritime Security Subcommittee hearing on Wednesday. (Photo by Jennifer Magana/Cronkite News)

Arizona Gov. Doug Ducey, who on Tuesday ended his formal emergency health declaration on opioids, told lawmakers that the state has “certainly made progress, but we know that the fight remains deathly and it is far from over.”

Ducey said the state has improved access to treatment, enhanced education for people who prescribe or dispense opioids and enacted a good Samaritan law that shields users from drug charges if they seek help for someone who has overdosed.

Still, more than 1,200 Arizonans died during in the past year from suspected opioid-related causes, according to the Arizona Department of Health Services.

Scott Brown, special agent in charge of Homeland Security investigations, said law enforcement has identified China and Mexico as primary sources of opioids – in the form of heroin and fentanyl – in the U.S. The drugs often are shipped through international carriers.

Guadalupe Ramirez, acting director of field operations for U.S. Customs and Border Protection in Tucson, said heroin is a particular problem. In fact, heroin seizures alone have increased fivefold since 2009.

“We cannot enforce our way out of this problem,” she said. “We must also tackle this crisis with treatment and recovery options that help restore individuals to health and break the cycle of addiction.”