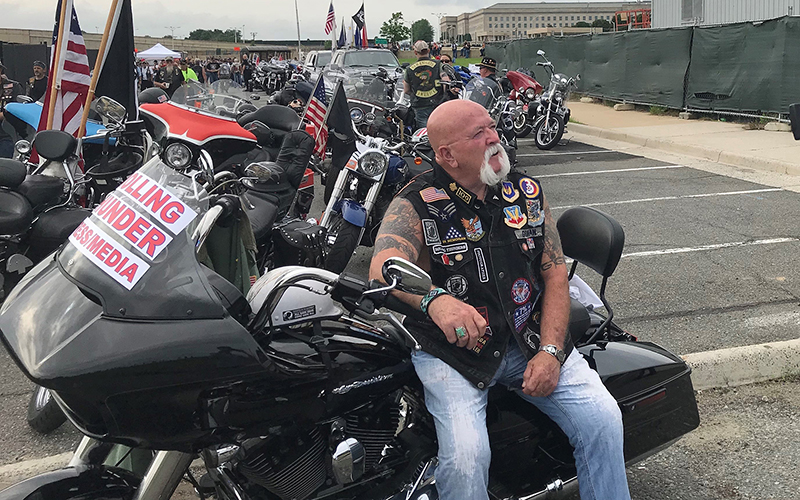 Air Force veteran Dan Grannan at the Pentagon before the start of the Rolling Thunder Run to remember POW/MIAs. He said the annual rally is “the welcome home I really needed” after serving in Vietnam. (Photo by Bryan Pietsch/Cronkite News) 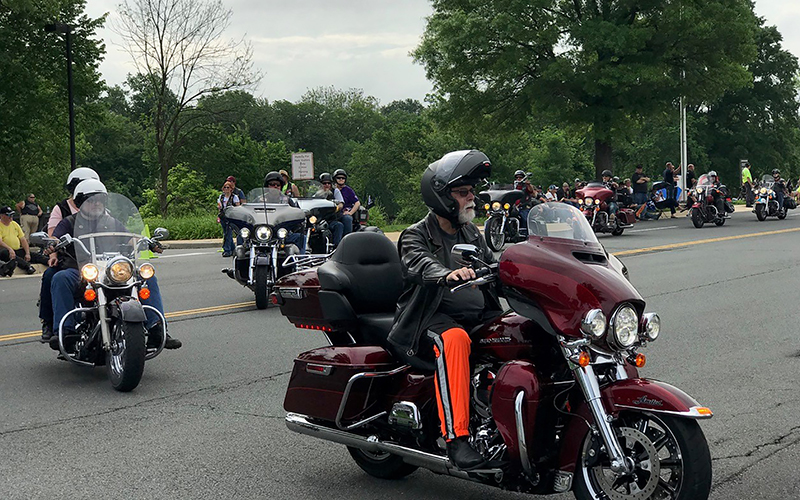 Thousands of motorcylists help the Rolling Thunder Run live up to its name as they ride their bikes through the streets of Washington in a procession that organizers said can take hours to pass. (Photo by Bryan Pietsch/Cronkite News) 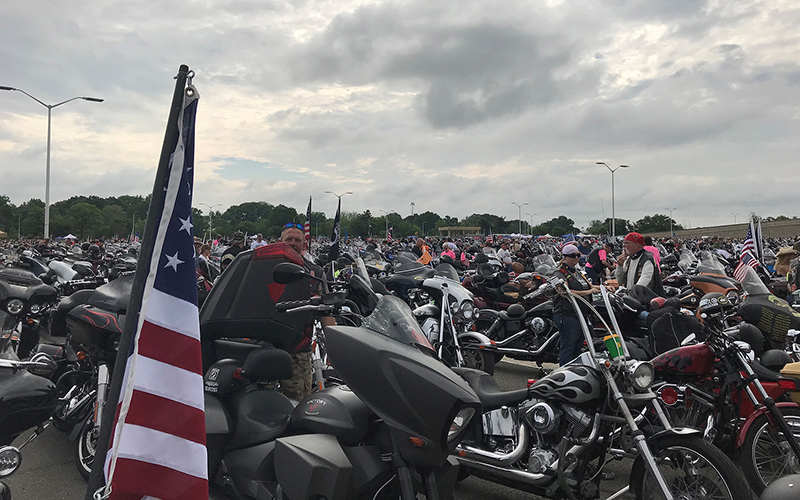 Motorcycles formed a sea of leather and chrome in the Pentagon parking lot Sunday, as thousands of bikers from around the U.S. and the world came to D.C. for the Rolling Thunder Run. (Photo by Bryan Pietsch/Cronkite News) 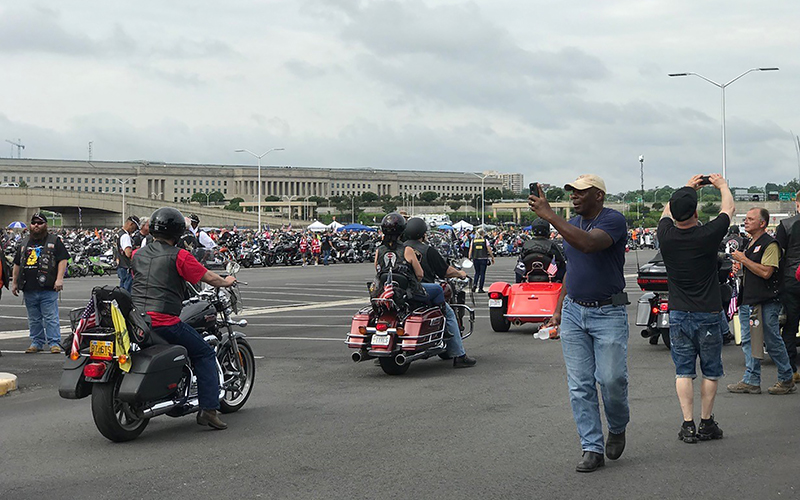 Riders in the Rolling Thunder Run, now in its 30th year, ride from the Pentagon to the Capitol and then down to a spot near the Vietnam and Korean War memorials to pay their respects. (Photo by Bryan Pietsch/Cronkite News)

WASHINGTON – For Dan Grannan, an Air Force veteran from Tucson, the rush and the camaraderie that he experienced at his first Rolling Thunder Run more than a quarter-century ago has kept him coming back since.

“I remember the very first time I went on this ride in ’92 and when I went across that bridge over the Potomac, my goosebumps had goosebumps,” Grannan said. “It was like a welcome home that I really needed.”

The annual Memorial Day event began with 2,500 motorcyclists in 1988 and is named for the sound the bikers make as they roll through the streets of Washington to bring attention to prisoners of war and soldiers missing in action.

It has since expanded to what organizers say are hundreds of thousands of bikers. Although no strict tally is kept, it can take hours for all of them to process out of the Pentagon parking lot where they gather.

The rally today lives up to its name. The heavy scent of exhaust filled the air as motorcycles rolled across the Memorial Bridge into Washington, the rumbling of motorcycle engines and country music accompanying their ride around the monuments before they end up near the Vietnam and Korean War memorials.

Artie Muller helped found Rolling Thunder when he saw reports that the U.S. left numerous POWs behind in Vietnam. He was outraged, inspiring him to begin the rally.

“When I was in the infantry in Vietnam, if I were captured I’d want somebody to fight for me,” Muller said Sunday.

The organization’s website says the run began after the Vietnam War to bring “awareness and accountability” for those left behind. According to the Defense POW/MIA Accounting Agency, there are 7,702 Korean War veterans and 1,598 Vietnam War veterans who are still unaccounted for.

The Rolling Thunder riders now are older and white-haired, many with wives riding shotgun. But the rally also attracts younger veterans from combat in Iraq and Afghanistan as well as those who did not serve but support the cause.

Riders come from across the U.S. and, in some cases, from overseas.

“It’s a day to go with your (military) family and honor those who can’t ride with us anymore,” said Hank Van Boxtel, who came to Rolling Thunder from the Netherlands.

As a veteran of the Dutch Royal Navy, he said he came to honor the Dutch and American veterans who served in Korea together.

For many riders, Rolling Thunder is more than a fun weekend to ride with their friends – it’s a way to connect with fellow veterans and remember those who gave their lives in service.

“I had four really good friends die in Vietnam, two on the same day,” Grannan said. “That’s why I come here.”

He said Rolling Thunder fills a void and allows him to stay connected to the military, which he described as “the best thing that ever happened to me.”

“I got spit out from being in the service. I never got a parade,” Grannan said. “But when you come here, you’re with your brothers and it’s a reunion.”