Dockless bikes do not require a docking station like those used by the Grid bike-share program, which allows customers to leave them wherever they please. The bikes are fitted with a solar-powered GPS that enables company staff and customers to track them through an app. The services work like Uber or Lyft: Users download the app, put in their credit card information and unlock a bike. 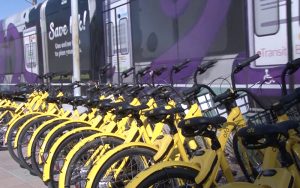 Paul Vidal, general manager of Ofo, said the Valley has been one of their best markets in the country. (Photo by Mari Nelson/Cronkite News)

LimeBike and Ofo own those green and yellow dockless bikes seen most prominently in Old Town Scottsdale, but they have bikes scattered throughout the Phoenix area.

“In the first two months of the businesses being in Scottsdale, there were 55,000 individual rides,” said Paul Basha, Scottsdale’s transportation director.

That averages to nearly 1,000 rides per day when they started operations in Scottsdale in November 2017. Erik Hultquist, an operations manager with California-based LimeBike, said the Scottsdale branch logged nearly 7,000 rides in one weekend in March.

Paul Vidal, general manager of Beijing-based Ofo, said metro Phoenix has been one of the company’s best U.S. markets on many metrics, including total rides and rides per bike.

“We put the bikes in the right places – places that have been underserved by transportation options in the past so that everybody has access to them,” Vidal said. “That’s kind of our vision, having a bit of community entitlement that you can always have access to a cheap, easy to ride, and safe bike that you can use to get places.”

The companies placed their bikes in spots where having a bicycle would be a benefit, such as near restaurants and by bus stops.

Customers don’t always do the same, however. Basha said the city received more than a few complaints during the days of early operation, adding, “They lay a bike down so it blocks the sidewalk.” 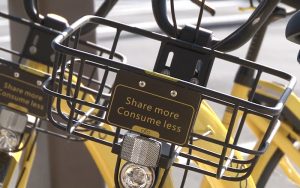 Dockless bike-share programs are seeing rapid growth in the Valley, but some consumers leave the products at inconvenient places. (Photo by Mari Nelson/Cronkite News)

“When I’m done riding these bikes, I’m not mindful at all of where I put the bike,” Weinberger said. “I just leave it on the street.”

Hultquist, whose duties include finding misplaced or damaged bikes, said he found bikes in the water on a couple occasions. Wherever they wind up, he said, every misplaced bike is a priority for LimeBike.

“Where you’re going rarely means the middle of a sidewalk or an entrance ramp in front of a business, but it ends up there, and it’s our job to correct that immediately,” he said.

Hultquist said fewer than 1 percent of the bikes in their fleet end up badly placed or damaged, and calls of complaints have decreased substantially since the early days.