But Arizona’s continued lack of rain and snow doesn’t much bother Charlie Ester of the Salt River Project.

“I consider SRP to be a consummate, full time, always thinking about drought. We were formed because of drought, so therefore we always plan for drought,” said Ester, the utility’s surface-water resources manager.

Ester said SRP, the largest supplier of raw water to metro Phoenix, has enough water for its customers – despite coming off one of Arizona’s driest runoff seasons.

Officials predict that SRP reservoirs, which are fed by snowmelt from the mountains of northern and eastern Arizona, will receive record low amounts of runoff in 2018 because of a dramatically dry winter. Water managers said Arizona’s snowpack was 28 percent below normal as of March 1, according to KJZZ. 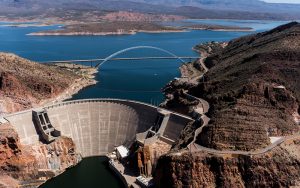 Theodore Roosevelt Dam turned Arizona desert into a land that could be farmed by controlling the erratic flow of the Salt River and collecting the water for irrigation. The dam, completed in 1911, also produces electricity. (Photo by Daria Kadovik/Cronkite News)

However, Arizona had a “wet” year in 2017, and SRP stored much of that runoff for future use.

SRP, which serves a 375-square-mile service area, works to sustain Arizona’s water supply by constantly moving water between its seven reservoirs in north-central and eastern Arizona. That ensures the smaller reservoirs don’t overflow during wet seasons.

During a helicopter tour in April, SRP officials pointed out the “bathtub rings” on many reservoirs, which indicate lower water levels.

However, an empty or low reservoir does not signal a crisis, officials said. SRP officials said it is normal for water levels to fluctuate dramatically depending on the time of year.

“We’re really trying to be a good steward of all the water resources we have available to us so that we can ensure our water future,” Ester said, “because we don’t know when droughts are going to be worse, or when they’re coming.”

Despite the decades-long drought, Ester said the state still must prepare for any water circumstance, such as having too much at once.

“Drought is just one end of the hydrologic spectrum,” he said. “We’ve also got to be ready for flood events, and as a hydrologist, I like the flood events better, but most of my career has been dealing with this drought that we’re in.”

Metro Phoenix generally gets its water from three sources: SRP, which brings water from the watersheds of the Salt and Verde rivers; the Central Arizona Project, which draws from the state’s allotment of Colorado River water and groundwater; and wells. Each source is interconnected.

In addition, Phoenix and other cities also use reclaimed effluent for golf courses, parks and to recharge aquifers.

Tom Buschatzke, director of the Arizona Department of Water Resources, said about 17 percent of the surface-water supply in the state comes from rivers within Arizona.

Ester said he has has seen a significant drop in Phoenix’s water use, similar to other cities across the country.

But protecting Arizona’s water supply remains the priority for SRP, a quasi-municipality established by federal law in 1902 that also provides electrical service to central Arizona.

Theodore Roosevelt Dam controls flooding on the Salt River and impounds the water for irrigation and production of electricity. According to SRP's website, when dedicated in 1911, it was the world's largest "cyclopean masonry" dam, a Greco-Roman style of building that uses huge, irregular blocks of stone. (Photo by Daria Kadovik/Cronkite News)

"We haven't done anything to manage the drought because we're always thinking about it," said Charlie Ester, Salt River Project's surface-water resources manager, noting the low water levels (30 percent of capacity) in the Verde River, a major river for SRP. (Photo by Daria Kadovik/Cronkite News)

The drought in Arizona started about 1995, but not every year has been dry. Because the Southwest is a region of great variability, Ester said there should be a lot more wet years in the future. (Photo by Daria Kadovik/Cronkite News)

The Salt River, which is at 60 percent of capacity, is home to many types of wildlife. Ester said SRP officials worry about the effects of the drought on animals. (Photo by Daria Kadovik/Cronkite News)