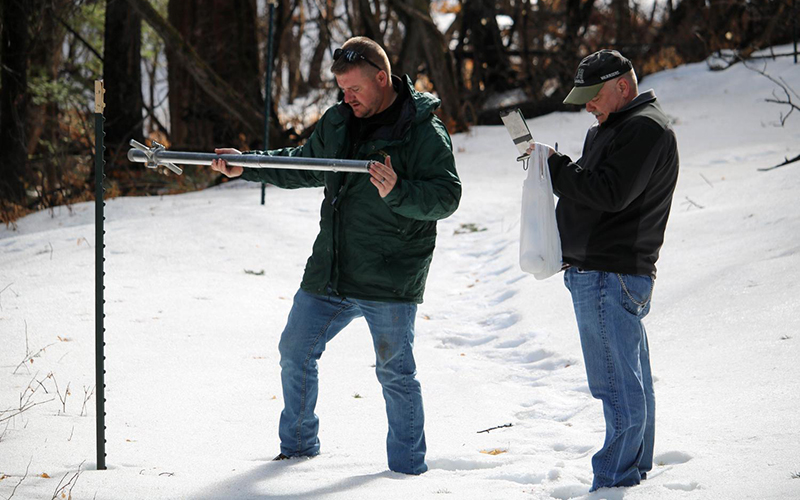 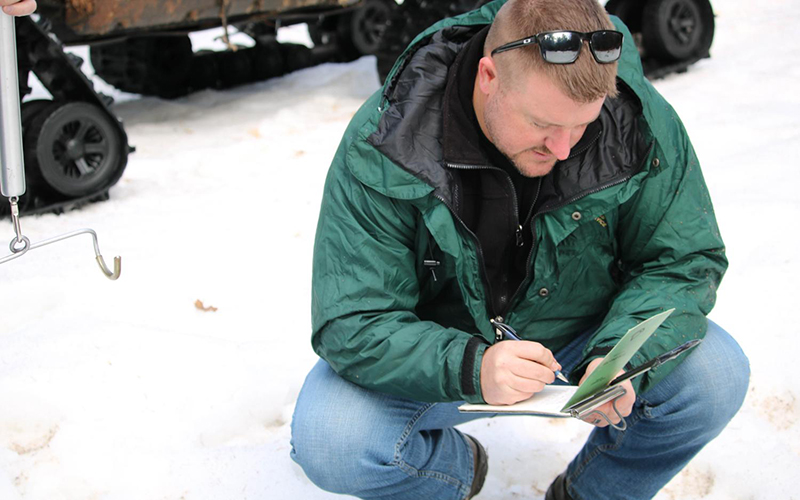 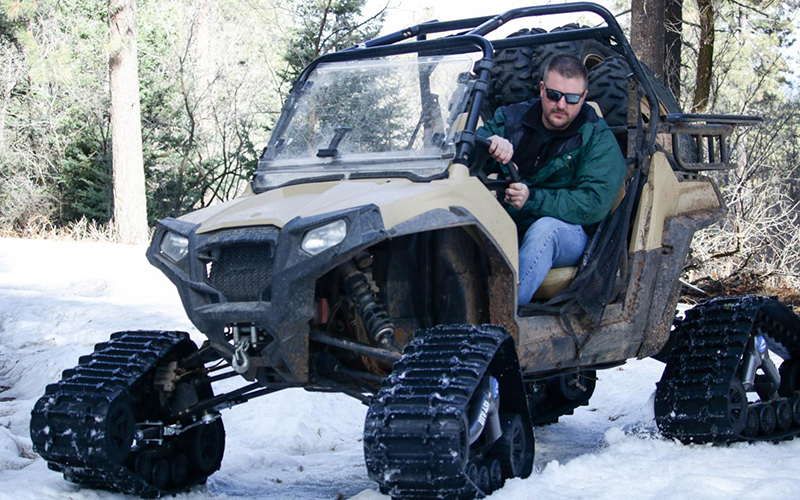 USDA’s Travis Kolling backs up the UTV he drives to get to the snowpack measuring site. (Photo by Casey Kuhn/KJZZ)

SRP hydrologist Andrew Volkmer strapped snowshoes on two young boys while their guardian watched. This was the first time the kids had worn snowshoes; their guardian suggested that someone first explain to them what snow is.

Volkmer’s job that day was to do just that and explain why snowfall so important for the state’s water supply. That message is critical this year because most of the West is under stress from climate change and other factors.

Water managers say that as of March 1, Arizona’s snowpack was far below normal, at 28 percent. The season ends April 1, leaving little time to turn things around. That would be one of the lowest totals in 105 years of recordkeeping.

With help from the two boys, Volkmer plunged a hollow aluminum tube into the waist-high snowpack simulator. He pulled it out and looked at a slot in the pole that showed the depth of the snow. He put it on a scale and weighed it, to shows how much water would result once the snow melts.

The same process is used wherever snowfall data are collected. Hydrologists measure and weigh the snow to calculate the eventual runoff, then record their findings. 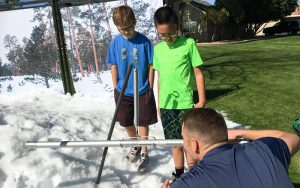 Two boys look on as an SRP employee shows how to measure snowpack. (Photo by Casey Kuhn/KJZZ)

At the Tempe event, Zarena Brotestante and her mother learned how snow melts to become the water that flows from their taps.

“And then we use that to run into our models to determine how much is in our reservoirs,” Volkmer said. “And that gives us a good idea of where our reservoir levels are going to be at the end of winter.”

As of mid-March, SRP reservoir levels are 61 percent full. Not great, but not terrible either, said Charlie Ester, surface-water resource manager for SRP.

That’s all because of longterm planning. Ester said SRP plans 11 years ahead for water supply.

“While we’re increasing the amount of groundwater we’re going to use this year, that’s not because this year is dry,” Ester said. “We’re looking out to next year. What if next year is just as severely dry and maybe even worse?”

The winter snow in eastern Arizona’s high country melts and goes into the Salt and Verde rivers. SRP has dammed those rivers to fill reservoirs, which are managed and sent through canals for agricultural and urban use. Because there’s less than half the typical snowmelt replenishing those reservoirs, Ester said SRP will use more groundwater to supplement.

Everyday water users don’t have to worry about cutbacks now, he said, but water in the desert is a luxury.

“We have enough water to use but not to waste” Ester said. “We should treat every drop of water like it’s a precious resource – because it really is.”

It’s also important to educate metro Phoenix residents about where their water comes from, Ester said, because so many people come from somewhere else.

“The Valley of the Sun has such a dynamic population,” he said. “So that means people are coming from all over the United States, and hopefully they knew where their water came from in those places, but it’s more than likely not going to be the same here.”

Most of metro Phoenix’s water starts 100 miles away as snow falling in the mountains near Pine, east of Camp Verde. There, U.S. Department of Agriculture engineer Travis Kolling drives an all-terrain vehicle to get to a testing site.

At the end of an old forest road, the evergreens grow tall and thick. There’s practically no snow, but closer to the collection site, sparkly white patches appear. The snow crunches underfoot as Kolling and an assistant, who are with the USDA’s Natural Resource Conservation Service in Arizona, collected data. Their boots sank into the snow.

“Usually, we have to wear snowshoes for this,” Kolling said.

His assistant jotted down the inches of snow before Kolling dumped the sample into a bag for weighing.

“This is our official snow-survey Walmart bag,” he said.

Arizona had a wet winter last year, but this year looks like drought conditions again.

“It’s pretty low,” Kolling said. “Normally, this is the peak snowpack, and it’s already melting out.”

Collecting snow data is a low-tech procedure that’s basically unchanged since such measurements began in the 1920s. That has resulted a rich data set for such scientists as Philip Mote, director of Oregon Climate Change Research Institute at Oregon State University.

“The number of trends going down is a lot relative to (the data’s) variability was much, much greater than what you expect by chance,” Mote said.

Mote led a study that found the Western snowpack across the board is declining due to climate change. Arizona showed a greater decrease than most Western states.

“Indeed, the warming trends we have observed are the culprit in the decreases in snowpack that have been observed,” he said.

Mote ran the data through a model twice: once with observed climate-warming trends and again without. Only the climate-change simulation mirrored real-life snowpack numbers.

Water managers will keep worrying about water supply, like they do every year.

“I don’t think we need to be worried now at this point,” SRP’s Ester said. “But … there’s that uncertainty with climate. And we don’t know what the future’s going to bring.”