How Monopoly, Jenga and Battleship show cryptocurrency’s energy drain is no game 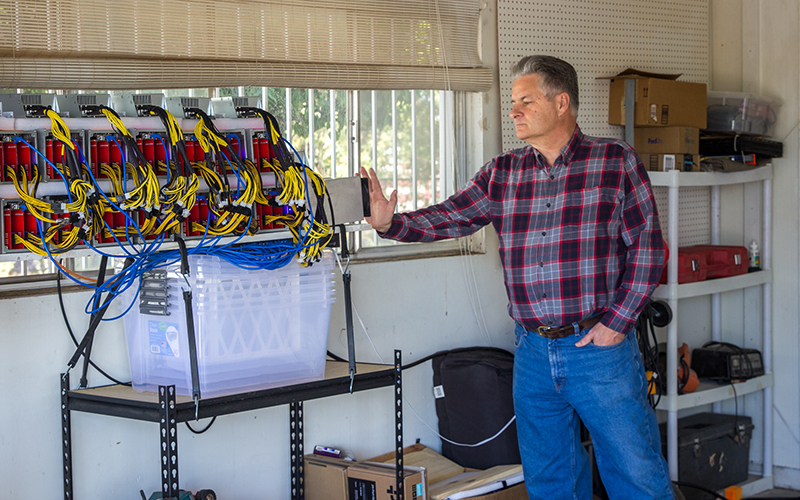 Retiree Steve Irwin checks the temperature of his “mining rig,” a set up of 14 computers that continuously solve algorithms to compete for cryptocurrency rewards. He said the computers make him $450 per day. (Photo by Jenna Miller/ Cronkite News)

SUN CITY – Computers lining the rickety plastic shelves in Steve Irwin’s garage make him $450 a day – and eat energy that could power four homes every month.

Irwin tinkers with the machines once in a while to monitor their operating temperature but mainly leaves them to do their job of mining for online currency, known as cryptocurrency. The computers are whirring 24 hours a day – computers don’t require overtime, he jokes – and make him more than he earned as a chemistry instructor at the nuclear power plant he left in 2017.

But the lucrative operation comes with a hefty electricity bill of $400 a month, much more than the $100 he pays for electricity in the rest of his home.

The global bitcoin network, the most popular cryptocurrency, consumes the same amount of energy as Switzerland, according to the cryptocurrency analysis website Digiconomist.

To understand how that works, click on the video below, which explains the network’s energy consumption using Monopoly, Battleship and Jenga.

Demand is growing, even though the cryptocurrency market is volatile. Irwin has grown his mining operation at home from one machine to 14 over the past four years, with more computers near his son’s home in Colorado.

He worries about the energy cost; his wife worries about the market volatility and the noise the machines make. But the profits are undeniable and Irwin wants to expand. He hopes to buy more machines and transfer them to a data center in Colorado where energy is cheaper.

Ryan Taylor, chief executive of Dash, a Phoenix-based cryptocurrency, said the industry needs to shift its thinking and bring energy concerns to the forefront.

“Honestly, I don’t think there is enough attention being paid to it,” he said. “At the end of the day, our environment is impacted and there is a cost there, too, that’s being imposed on all of us.”