Swinging for the fences: Chandler bat company finds it way to major leagues 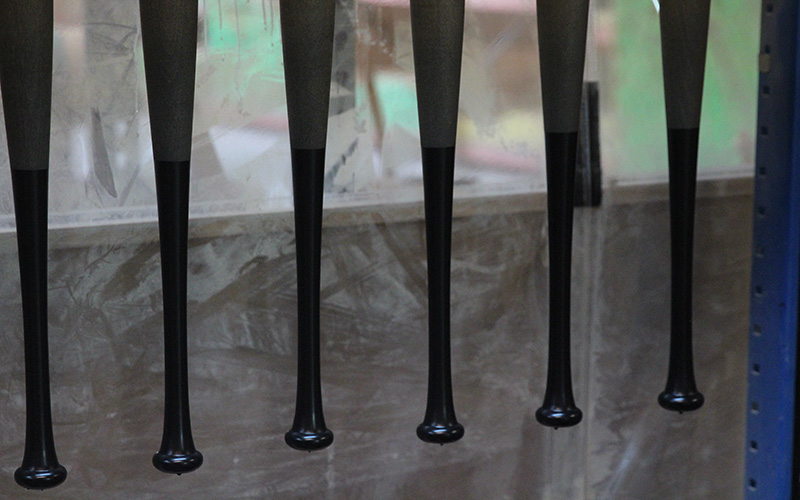 Zinger Bats in Chandler are one of several dozen companies licensed to provide bats to Major League Baseball. The owner moved the company to the Valley in 2012. (Photo by Tyler Strachan/Cronkite News) 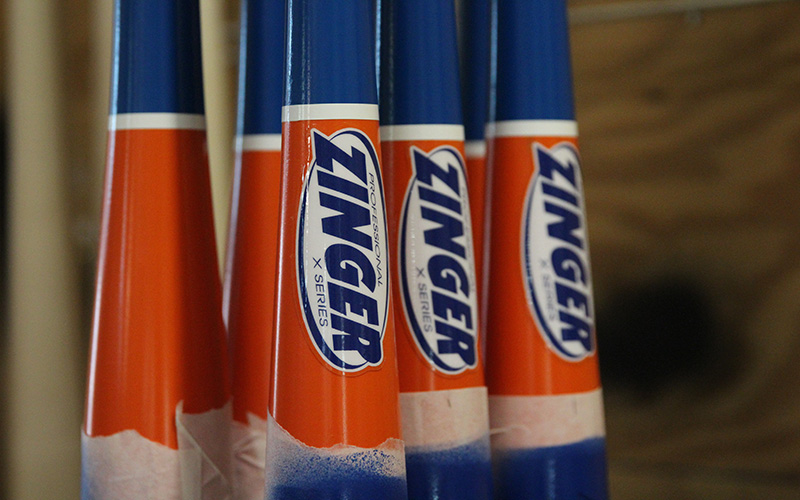 Zinger Bats come from maple, ash and birch wood from the New York-Pennsylvania area. The wood is then transported to Arizona by truck. (Photo by Tyler Strachan) 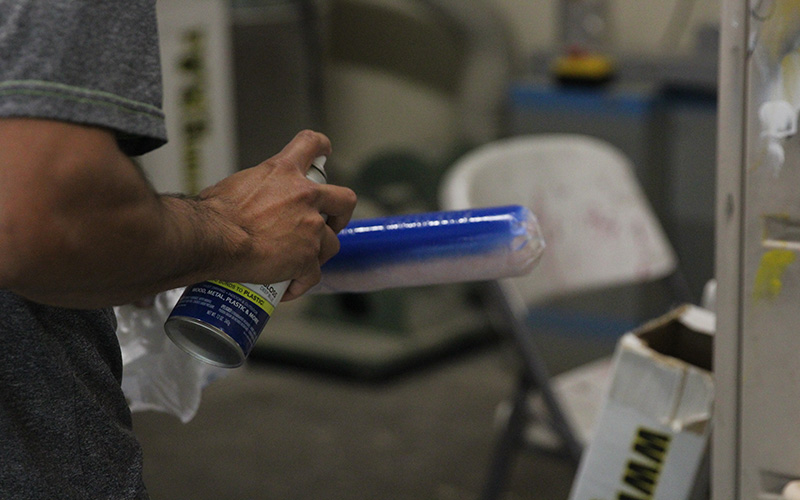 Depending on how a player wants a bat to look, some Zinger Bats are painted by hand, other are dipped into a bucket of paint and a few are sprayed. (Photo by Tyler Strachan/Cronkite News)

CHANDLER — With Major League Baseball back in action, the crack of a wooden bat returns as one of the soundtracks of summer.

Some of that sound is courtesy of Valley-based Zinger Bats. The company provides bats for all levels of baseball, including the major leagues.

“I’ve enjoyed them,” Diamondbacks pitcher Zack Godley said. “They don’t necessarily work for me — but that’s not the bat’s fault, that’s me — but as far as feel and stuff during (batting practice), I love them.”

Zinger Bats originated in Utah but relocated to Arizona in 2012 when Scott Hanish bought the company and moved it to the area where he was born and raised.

“Utah is a great place (but) there isn’t as much baseball there as there is here,” Hanish said. “During spring training you could walk in (the shop) and there could be 10 to 15 pro guys looking around. There is always baseball here. … Not a bad place to have a bat company.”

Hanish, who played collegiate and independent league baseball, received a few old bats one day by a former major leaguer. They came from Zinger Bats and he remembers thinking they were the best he had ever used. A few years later, he received a call about an investment opportunity.

It was for Zinger Bats.

The company, founded in 1998 by Kelly Eastman, is among dozens of bat manufacturers that have found their way to the major league market. The top companies include Louisville Slugger and Marucci, but others, like Zinger, are making inroads. During the six weeks of spring training, the company sent approximately 4,000 bats to teams for spring use, Hanish said.

In 2016, Chicago Cubs infielder Addison Russell hit six RBIs and a grand slam in Game 6 of the World Series with a bat made by Zinger. His teammate at the time, Miguel Montero, hit the game-winning RBI in Game 7 of that same World Series, also with a Zinger bat.

“There’s 32 professionally approved bat companies out there. Every one of them can make a really good bat. It’s not like we have secret trees,” Hanish said. “At the end of the day, it is that dedication to providing that professional experience regardless of the age-level. … Our whole philosophy is put in that effort here for them on the production side, so that they can put in that same effort out there.”

That process of putting in the effort is a labor of love.

It starts with the maple, ash and birch wood pallets Zinger Bats order from the New York-Pennsylvania area. The wood is transported to Arizona by truck and when it arrives, it has to sit at the Zinger warehouse for a few weeks before it is ready to become a bat.

“Most people don’t understand that wood constantly adapts to its environment,” Hanish said. “So the relative moisture level of wherever that wood is at, if it is coming from the East Coast or wherever, will actually have different properties and gain or lose moisture depending on which way the wood travels.”

Arizona, a dry region, is vastly different than the very moist area of the New York-Pennsylvania region. The wood has to adapt to the climate the same way a tourist does after arriving in Arizona in the middle of July.

Once the wood is ready, it is weighed to address the needs of the bat’s designer. Maple, for example, is the heaviest type of wood and finding the right weight can be difficult.

Once the desired weight is found, that piece of wood has made the cut (literally) to the next round of the process. The wood is fed into a machine that cuts it to specifications. Zinger’s machine has the specs of thousands of bats saved within its system, which allows for a reorder of a bat to be done with ease.

From there, the process becomes hands-on. In the sanding and finishing process, three or four workers will work on the bat to make sure it is as high quality as possible, Hanish said.

“I didn’t really like woodshop in high school,” he said. “This is the one I would have wanted to be at.”

Next comes a hand-painting process. Depending on how a player wants a bat to look, some bats are painted by hand, other are dipped into a bucket of paint and a few are sprayed.

“It is literally like art. They are literally in there hand-painting bats,” Hanish said.

After the painting process is done, the bat is engraved by an industrial-sized laser that burns the desired engraving into the wood. Zinger has done everything from a player’s signature to the New York City skyline. At one point, Zinger was the official bat provider of the “Tonight Show with Jay Leno” on NBC. Bats have been made for actors Matthew McConaughey, Charlie Sheen and Jimmy Fallon, to name a few.

Chad Harding, the head of bat manufacturing for Zinger, has done every step of the process, starting out as one of the people that makes sure the bats are cut to size.

“It is a lot more of an intricate process than what people think,” Harding said. “A lot more steps than I think people realize.”

Finally, the engraving is filled with white paint, so that it stands out, and a Zinger sticker is put on the bat. After that, it is ready to make contact with a baseball or given out to a famous celebrity.

“Every single one of these bats tell a story,” Hanish said. “I can see one of our bats being used and I can say, ‘That bat was made three weeks ago and it came in a little light so we chopped it down and now there it is on the rack for you.’

“ There’s a lot of time that I can tell the story of the bat as it comes across.”