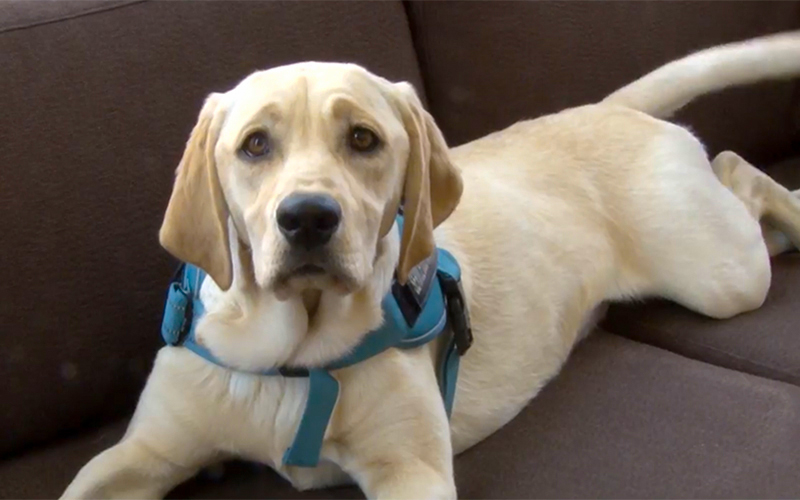 Gov. Doug Ducey recently signed a law that fines owners $250 for misrepresenting a pet as a service animal. Critics say it’s a solution in search of a problem. (Photo by Mari Nelson/Cronkite News)

PHOENIX – A controversial new law will levy a $250 fine on people who misrepresent their pets as service animals in such businesses as restaurants and stores.

The law is meant to deter pet owners from abusing a system that protects people with disabilities, even though the lawmaker who sponsored the bill said it will be difficult to enforce. People can buy a service-animal vest or certificate online for as little as $10.

Still, Meg Myers, who relies on her service dog, Nala, said the law will help the public have a less skewed view of service dogs.

“The ones who have been faking it and aren’t well behaved will possibly be removed,” Myers said.

Myers has two autonomic heart conditions that lead to medical difficulties, including seizures. Nala is being trained to be on cardiac alert and is able to complete several medical response tasks, including barking or clawing at Myer’s leg if she detects a significant increase in her owner’s heart rate.

“If I faint, she’ll be trained to lay across my body so nobody moves me,” Myers said.

Under certain circumstances, she said, it’s reasonable for businesses to question the legitimacy of a service animal, as long as the business owners are respectful and educated on the issue.

“You can’t see that my heart is affected, so I think businesses should be empowered to at least be able to ask about it,” Myers said.

Critics say the law is unnecessary and has other problems.

“We don’t actually think this is the type of huge problem that people are claiming it is,” said Sarah Kader, an attorney for the Arizona Center for Disability Law.

Kader also opposed the law because its violate the privacy of people who require a service animal.

“You’re giving people the feeling that they can interrogate people and call the police because it becomes a violation of the law,” Kader said.

“What happens if a person with disabilities can’t get to court?” Kader asked.

Although some people carry certificates with them for their service animals, she said, others do not have any form of certification because the Americans With Disabilities Act “specifically prohibits requiring ID.”

Business owners were already allowed to ask two questions about someone’s service animal: “Is the animal a service animal required because of a disability?” and “What work or task has the animal been trained to perform?”

They also can ask someone with a service animal to leave the premises if the animal is misbehaving or can’t be condtrolled, Kader said.

Arizona Rep. John Kavanaugh, R-Scottsdale, pushed for the bill, signed into law this week by Gov. Doug Ducey, but he acknowledged it will be difficult to enforce.

“In most cases, the only way someone would get a summons would be if they were stupid enough to admit to a police officer that they had a fraudulent dog,” Kavanagh said in an interview with azcentral. “There are stupid criminals.”

Kader said federal law protects the use of service animals. The Americans With Disabilities Act does not apply to emotional-support animals.

“If someone says this is my emotional support animal, a business is not required to allow them to stay,” she said.

Taylor Randoe, a dog trainer for Sparky’s Service Dogs at Arizona State University, said many of the issues arise when people do not understand the difference between a service animal and an emotional support animal.

Service animals are trained specifically to mitigate a disability, Randoe said, while emotional support animals provide comfort merely by being close to an owner.

She hopes the law will emphasize the importance of service animals and keep others from buying fake IDs or vests online just because “people want take their animal anywhere.”