Former Maricopa County Sheriff Joe Arpaio’s criminal contempt of court conviction last year, for failing to stop racial profiling of Latinos by his deputies, brought a swift pardon from President Donald Trump. A federal court has approved appointment of a special prosecutor as Arpaio tries to have his conviction vacated. (Photo by Bri Cossavella/Cronkite News)

WASHINGTON – A federal appeals court Tuesday approved the hiring of a special prosecutor to challenge former Maricopa County Sheriff Joe Arpaio’s claim that his contempt of court conviction should be vacated after his presidential pardon.

The procedural ruling by a divided three-judge panel of the 9th U.S. Circuit Court of Appeals comes after the federal government said it would not defend a lower court’s refusal to wipe the slate clean, with the Justice Department agreeing with Arpaio that his conviction should be vacated.

David Shapiro, an attorney at the MacArthur Justice Center at the Northwestern School of Law, was shocked that federal prosecutors agreed with the “disgraced lawman.”

“The decision by the Department of Justice to not try and defend a guilty verdict that its own prosecutors obtained is extraordinary,” said Shapiro, who joined six other legal teams pushing for the special prosecutor.

While Shapiro said he is “very, very pleased with the 9th Circuit’s decision to uphold the rule of law and appoint a private attorney,” an attorney for Arpaio called the court’s decision “disturbing.”

Jack Wilenchik said he worries that a special prosecutor would feel bound to argue against his client, regardless of the law.

The court has not announced who the special prosecutor will be.

Judge Richard Tallman, in a dissenting opinion Tuesday, said a special prosecutor is unnecessary because “Arpaio effectively conceded his guilt by accepting the pardon, and there is no need for more investigation.”

Tallman added that those who filed briefs supporting a special prosecutor did not even “attempt to hide the true purpose of their request – to challenge the underlying pardon.

“But the constitutionality of the President’s pardon is not at issue in Arpaio’s current appeal; the denial of Arpaio’s motion for vacatur of his conviction is,” Tallman wrote. “The request is inappropriate.” 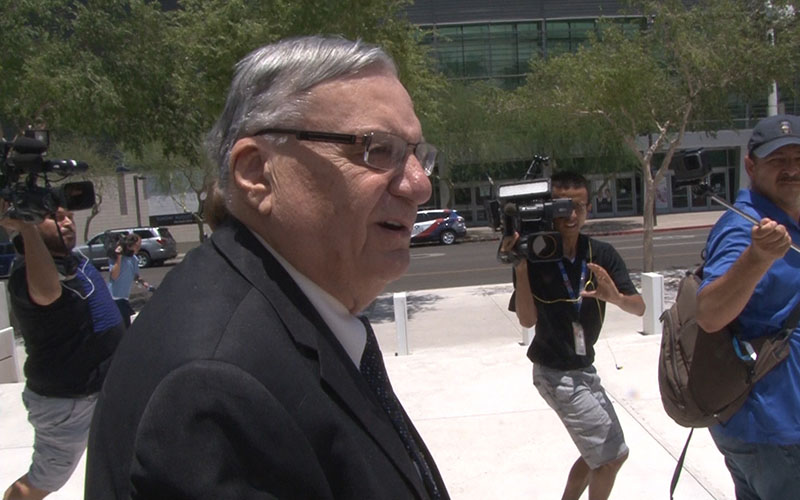 Arpaio, now a candidate for the seat being vacated by Sen. Jeff Flake, R-Arizona, declined comment Tuesday, referring questions to his attorneys.

The former sheriff was convicted in July 2017 of criminal contempt of court for failing to enforce a court order that he stop his deputies from racially profiling Latinos. But he was pardoned on Aug. 25 by President Donald Trump, who said Arpaio’s “more than fifty years of admirable service” to the nation makes him a “worthy candidate for a pardon.”

Arpaio petitioned to have his case dismissed before his scheduled October sentencing and the conviction vacated. A federal district court dismissed the case but refused to vacate the conviction, sparking Arpaio’s appeal.

Shapiro said challenging the pardon in this case is appropriate.

Shapiro hopes “the outcome will be an opinion from the 9th Circuit, weighing in on the presidential power to pardon, in this unusual circumstance.”

Wilenchik said those calling for a special prosecutor are merely targeting a prominent conservative politician and want to challenge the pardon for political reasons.

“That’s exactly problem with calling the person they’re trying to appoint a, quote, ‘special prosecutor’ is, he would have the power and the ability to raise all sorts of issues and do all sorts of things,” Wilenchik said. “It’s very clear here they (the judges) are bending their ear here to liberal interests.”

Tallman said in his dissent that the court “should not be wading into that thicket.”

The court’s “appointment now of a special prosecutor to advance a litigating position different from that pursued by the United States Department of Justice makes it appear as though we are appointing another prosecutor because we have prejudged the case and disagree with the Government’s position,” he wrote. “In light of this appearance of judicial bias, we should respect the Government’s position and remain impartial on the matter.”

Wilenchik agreed with Tallman, saying the decision “is very consistent with the narrative that the 9th Circuit is a very liberal-leaning court.”

“That in and of itself is a problem, as Judge Tallman noted. It’s the appearance of impropriety regardless of what their real reasons for doing this is,” Wilenchik said.

Shapiro said it is not politics that motivates the push for a special prosecutor, and the court’s agreeing to do so, but the decision by federal prosecutors not to defend the lower court.

“It’s the Department of Justice shirking of that responsibility that resulted in the appointment of a private attorney in these special circumstances,” he said.