PHOENIX – Teachers around Arizona held “walk-in” protests Wednesday for the second time in as many weeks as Red for Ed leaders discussed going on strike.

Organizers from Arizona Educators United, the grassroots movement leading the charge for Red for Ed, have not called for a walkout or strike, but said a decision would come soon.

“That will be potentially coming in the next few days,” said Noah Karvelis, one of the organization’s founders. “We just haven’t decided yet.”

Several parents at Desert Shadows Middle School said they support a strike because inadequate funding for education directly affects their children. Jill Leshin, one of the parents standing in solidarity during the Wednesday walk-in, said she welcomes the move despite the burden it would pose on her and other parents.

“I think they absolutely should strike. I think enough is enough. We live in a great state, we have plenty of money to fund education,” she said. “It would be a huge inconvenience if my kids had nowhere to go, but I am for it because I believe in the kids in the state.”

Educators are calling the protests “walk-ins” because they are conducted before school starts to avoid disrupting classes. Walkouts – effectively a strike – are considered a last resort.

But it’s unclear whether a majority of Arizona parents would support a strike.

Stephanie Brown, a former president of the United Parent Council in the Paradise Valley Unified School District, said she supports a possible walkout, but the district has more than 32,000 students whose parents are likely to have dueling opinions.

“The parents work. And it disrupts their work. And some of the parents don’t make as much as the teachers, so they’re wondering why is it that there’s such an uproar,” Brown said.

“But the education level and the commitment and the stress that teachers have is different, and it’s difficult to find those people.”

Republican lawmakers, including Gov. Doug Ducey, have mostly refused to hear the demands of educators, which include a 20 percent pay raise and additional funding for support staff. A walkout, Leshin said, could change that.

“If teachers strike, parents can’t go to work, and it’s going to directly affect the economy,” she said. “And then, people are going to pay attention.” 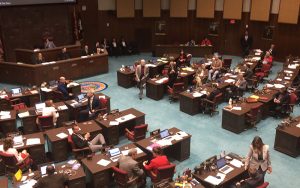 Ducey declined to be interviewed. But at the Capitol, several members of the House wore red in support of the teachers’ movement. And during the legislative session Wednesday, Rep. Heather Carter, R-Phoenix, introduced a physical education teacher who had run a marathon to show his support for Red for Ed.

Landon Benson said he left Sonoran Foothills School at 6:30 a.m., running the 26 miles to the Capitol in just more than four hours. He compared advocating for education to running a marathon.

“It’s about funding for our schools which has dropped significantly in the last decade, and so it’s about bringing those up,” Benson said. “A marathon is a long-term race and it is about creating long-term sustainability in our education system.”

Mary Mackay, a parent at Desert Springs Preparatory Elementary school, said the teachers’ demands would ultimately help students. She would keep her children at home for as long as it takes to bring change, she said.

“Our school district employees love our kids and ultimately want what’s best for them,” Mackay said. “If they feel this is what it takes to get the best for them, I am behind them 100 percent.”

The Arizona Red for Ed movement is part of a national outcry from teachers and education advocates about low salaries. In West Virginia, teachers went on strike for nine days before lawmakers gave them a 5 percent raise, and Oklahoma teachers took over the state Capitol last week as part of their push for a $10,000 annual pay increase.

Amy Smith, the Desert Springs teacher who organized her school’s walk-in Wednesday, said she was protesting for her students. 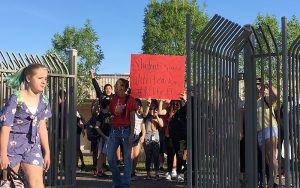 Teachers at Desert Shadows Middle School walked onto campus to cheers of “Red for Ed” from students at the front gate. (Photo by Chris McCrory/Cronkite News)

“I’m in support of being an educator and doing what we have to do to make our profession better,” she said.

“To lose these teachers would be devastating. They’ve made a difference in the lives of so many people. It’s time to get them what they deserve,” she said. “I think it’s really unfortunate that they have to go to that level, but I fully support it if that’s what it takes.”