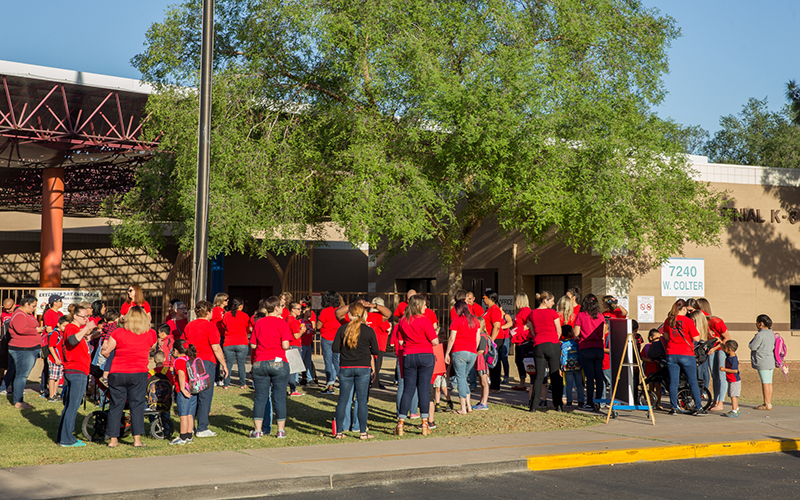 Dozens of red-clad teachers, parents and students gathered in front of Bicentennial South Elementary School in Glendale before class for a “walk-in” to support the Arizona Educators United Red for Ed movement. (Photo by Melina Zuniga/Cronkite News) 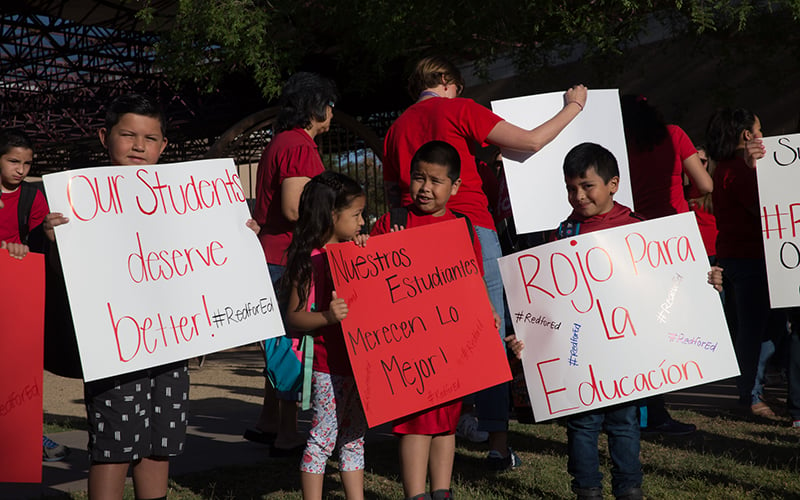 Signs in Spanish at the Bicentennial South School walk-in read “Our students deserve the best” and “Red for Education.” (Photo by Melina Zuniga/Cronkite News) 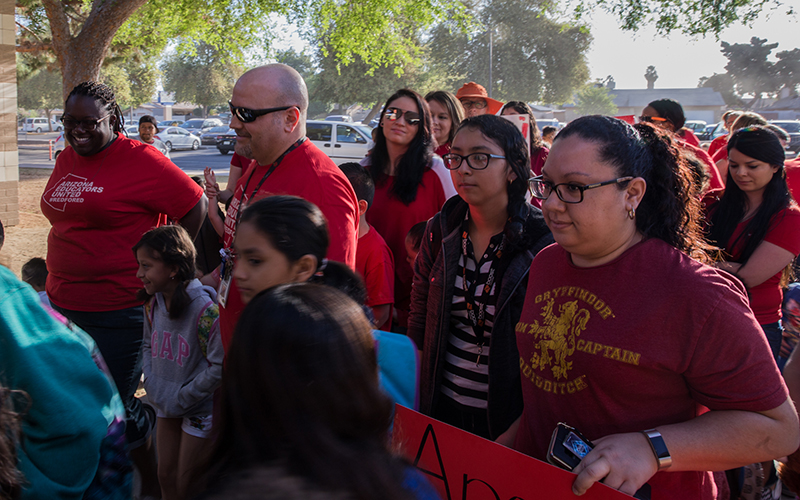 GLENDALE – Teachers and parents rallied at a Glendale elementary school and at campuses around metro Phoenix on Wednesday during “walk-ins” meant to raise awareness of the Red for Ed mission, one week after Arizona educators demanded public officials give them a 20 percent pay raise.

Education supporters gathered around the flagpole outside Bicentennial South Elementary School in Glendale, 30 minutes before the gates opened. They wore red shirts and jackets in a show of solidarity for demands for additional state money for teachers, staff and students.

District officials said they are frustrated because their schools are hemorrhaging teachers, some of whom go to other cities because of higher pay.

“We were really proud of the fact when school started … we were missing only two teachers,” said Monica Pimentel, a member at the Glendale Elementary School District governing board. “I don’t know what the exact number is today, but we’re missing a lot more than two.”

Organizers of Red for Ed protests, which are scheduled to continue next week, said they wanted parents to walk in to schools rather than continue to hold more traditional walkouts.

The walk-ins, meant to show lawmakers that teachers are serious about meaningful change, likely won’t be the end of the movement because the Republican-dominated Legislature and Gov. Doug Ducey are balking at Arizona teachers’ demands.

Ducey said teachers will not get a raise in the immediate future, according to the “Arizona Daily Star,” and he intends to continue proposing tax cuts, despite teachers’ demand that the cuts stop until they get substantial raises and more dollars are funneled into classrooms.

The Arizona Red for Ed movement is part of a national outcry from teachers and education advocates about low salaries. In West Virginia, teachers went on strike for nine days before lawmakers gave them a 5 percent raise, and Oklahoma teachers took over the state Capitol Wednesday as part of their push for a $10,000 pay increase.

“Teachers are leaving the profession because they can’t make a decent living, and that is just wrong,” said state Rep. Richard Andrade, D-Glendale. The legislator stood with the teachers Wednesday but said his colleagues would only listen to direct pressure from voters in November.

“We talk about a lot of issues, but when it comes to education our colleagues, the GOP, have a different opinion,” Andrade said. “What you see going on today, all the actions, all the walking, all the protests, we need to go past that. Look at voting records, see who is really supporting education.”

Some educators are conflicted over the possibility of a strike. 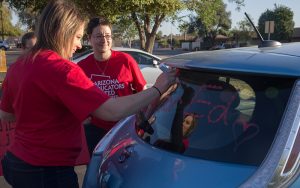 Samantha Moyer, a third-grade teacher at Bicentennial South School in Glendale, wrote “Red for Ed” on multiple cars before the walk-in demonstration in front of the school. (Photo by Melina Zuniga/Cronkite News)

“A walk-in is a place to start, and it’s a step along the lines of progression toward getting more,” Moyer said. “Walking out of a classroom is a big choice to make. It affects the routine of the children.”

Some parents at Bicentennial have made it clear they would support a teacher strike.

Erandi Carranza said she is happy with the education that her daughter, Sabrina, 7, is receiving but without such changes as smaller classes, she fears the quality will deteriorate as Sabrina gets older.

“It is a scary thought. What we want for our kids is a good education,” said Carranza, adding that Arizona teachers should get higher salaries. “With teachers getting paid better, I think it would be better for kids. They wouldn’t have the need to put so many kids in one class because they don’t have enough teachers.”

Carranza said she and other parents want to help in whatever way they can to secure a better education for their children.