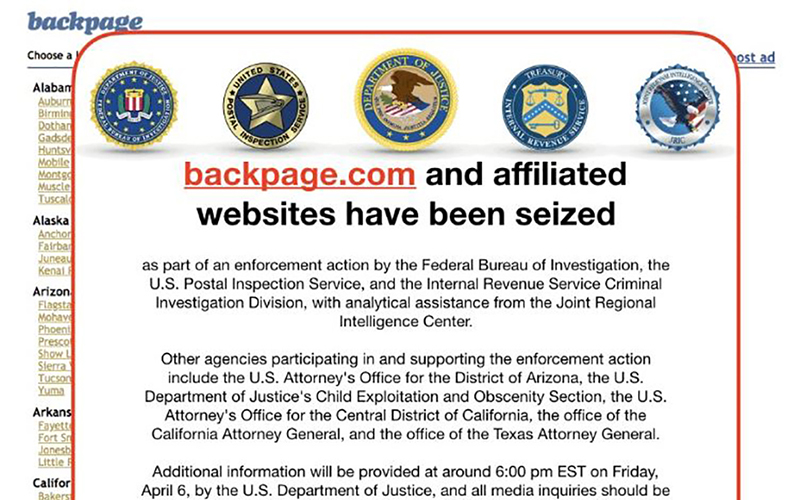 Federal law enforcement officials last week seized the web site and other assets of Backpage.com, an online ad site that prosecutors claim facilitated prostitution despite its owners claims that they prohibited ads for illegal services and worked to keep such ads off the site.

WASHINGTON – Former Phoenix New Times executives and Backpage.com founders Michael Lacey and James Larkin will be in court this week in connection with a 93-count indictment charging them and five others with conspiracy, money laundering and facilitating prostitution.

The indictment, unsealed Monday, charges that personal ads on the Backpage.com site allowed prostitution and sex trafficking, netting more than $500 million since the site’s creation in 2004. Lacey, Larkin and the others were arrested after the Justice Department seized Backpage.com and all its affiliated websites Friday.

Calls to the defendants’ attorneys were not immediately returned Tuesday, but critics of the website have hailed the arrests.

“The seizure of the malicious sex marketplace Backpage.com marks an important step forward in the fight against human trafficking,” Sen. John McCain, R-Arizona, said in a statement following the seizure.

“This builds on the historic effort in Congress to reform the law that for too long has protected websites like Backpage from being held liable for enabling the sale of young women and children,” his statement said.

Investigations into Backpage.com sparked bills that would amend a decades-old law that said online platforms could not be prosecuted for the content posted on their sites, a protection that supporters called an outdated loophole in the Internet age.

Critics of the bill, which passed with overwhelming support last month and is awaiting the president’s signature, say it could harm First Amendment rights and online sex workers.

But Sen. Rob Portman, R-Ohio, who introduced a Senate version of the bill, also lead a Senate subcommittee investigation that resulted in a report last year on Backpage.com’s “knowing facilitation of online sex trafficking.”

Among other claims, the report said that Backpage.com was editing the language on its site to strip out terms that were related to underage girls before the ads were posted in the adult section.

“For far too long, Backpage.com existed as the dominant marketplace for illicit commercial sex, a place where sex traffickers frequently advertised children and adults alike,” Attorney General Jeff Sessions said in a statement after the indictments were unsealed.

The 61-page indictment, returned under seal March 28 by a federal grand jury, claimed that “virtually every dollar flowing into Backpage’s coffers represents proceeds of illegal activity.” In 2015, the indictment said, credit card companies stopped processing payments for Backpage.com and closed the site’s bank accounts out of “concern they were being used for illegal purposes.”

The indictment includes one count of conspiracy and 50 counts of facilitating prostitution against all the defendants but Brunst. It names Lacey, Larkin, Spear, Brunst and Hyer in connection with 42 various money laundering charges.

When they were called to testify before a Senate committee early last year, Lacey and Larkin invoked their Fifth Amendment right against self-incrimination. But a letter provided to the committee before the hearing said the site and its employees “agree that human trafficking is abhorrent and should be eradicated” and that it “has spent thousands of hours and millions of dollars” working with law enforcement to fight trafficking.

The indictment disputed the site’s claims that it barred ads offering illegal services and patrolled ads with computer filters and human moderators to weed out prostitution. It called those claims little more than “a fiction designed to conceal the true nature of Backpage’s ads and customers.”

The investigation was a joint effort between Justice, the FBI, the U.S. Postal Inspection Service and the Joint Regional Intelligence Center, along with several U.S. Attorney’s offices.

“The masterminds behind Backpage are not only alleged to have committed egregious amounts of financial crimes such as money laundering, they did so at the expense of innocent women and children,” said Don Fort, chief of the IRS Criminal Investigation Division.

Assistant U.S. Attorney Elizabeth A. Strange said in a statement that it “is appropriate that Backpage is now facing criminal charges in Arizona, where the company was founded.”

Lacey is scheduled for a detention hearing Wednesday in federal court in Arizona, followed by Larkin on Thursday. A trial date in the case has been set for June 5.