An annual report on airline performance says the industry did better in 2017 than it had in the 28 years of the report, which measures customer complaints, baggage handling, bumped passengers and on-time performance. (Photo by Chloe Nordquist/Cronkite News) 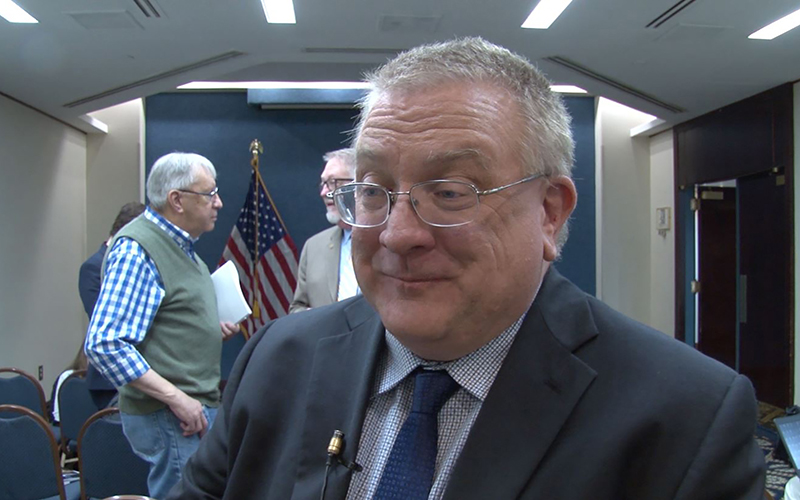 Brent Bowen, a professor at Embry-Riddle Aeronautical University in Prescott, said one factor contributing to the improvement in airline performance is the spread of social media and carriers’ need to respond to it. (Photo by Ariana Bustos/Cronkite News)

WASHINGTON – Despite a “rough year for airlines in the public’s eye,” the industry had the best year ever in terms of passenger service in 2017, according to an annual airline quality report released Monday.

The 28th annual Airline Quality Rating said the industry improved in the number of denied boardings, mishandled baggage and consumer complaints, with only on-time performance slipping from 2016 to 2017.

“The industry … all stepped up, nine of the 12 airlines we looked at got better this year,” said Dean Headley, a professor at Wichita State University and co-author of the report.

The report comes one year to the day after video of a bloodied, screaming United Airlines passenger being dragged off a flight went viral. United since saw the most improvement in the report, which said the industry as a whole posted the best results for bumped passengers ever.

Brent Bowen, who co-wrote the report with Headley, said “the impact of passengers’ use of social media to publicize issues in real time puts pressure on airlines to respond immediately and change their culture.”

“The results of the study show they (airlines) are making an effort,” said Bowen, a professor at Embry-Riddle Aeronautical University in Prescott. “Even if it may seem incremental to the traveling public, the numbers are there.”

Those numbers show that American Airlines, the biggest carrier for Phoenix Sky Harbor International Airport, improved in all four of the categories measured in the report but still ranked ninth out of the 12 major carriers studied.

“Well this is big news in Arizona … because our big airline in Arizona is American Airlines and American is at the bottom of the list for the large major carriers,” Bowen said.

That despite the fact that American was one of three to improve across the board, along with Frontier and United. Headley said that even though it improved, American did not move out of ninth place, because most other airlines also saw gains last year.

“The 12 airlines we look at are so close together now that being down at number eight, nine or something like that out of 12 isn’t really that big of a deal,” Headley said. “It just sounds bad, but quite frankly they’re doing quite well.”

American Airlines said in a statement Monday that the airline had its best performance in 2017 and continues to “focus on improving” and “enhancing the customer experience.”

“Throughout 2017, thanks to dedication of our 120,000 team members, we had record on-time departures and on-time arrivals, as well as our lowest rate of mishandled bags and customer complaints,” the statement said.

Southwest Airlines, the second-largest carrier at Sky Harbor, moved up one spot to fifth. The airline bumped fewer passengers and lost fewer bags, while customer complaints were unchanged. But its on-time arrival rate slipped from 80.8 percent in 2016 to 78.7 percent in 2017.

A statement from Southwest said it “climbed in the Airline Quality Ratings despite a challenging operational year with highly disruptive weather conditions during peak travel seasons.”

The industry group Airlines for America said the on-time performance may have been down, but it was still “Especially impressive considering the operational impact of Hurricanes Harvey, Irma and Maria” last year.

The only three airlines whose score did not improve were Alaska, Delta Air, and Virgin America. Alaska still held on to first place, edging Delta by just 0.005 points in the report. Virgin America dropped from third place in 2016 to seventh last year.

Headley said that rankings are highly subjective year to year, and while carriers like Southwest and American Airlines could do better, they are working to improve just like everybody else.

“Being in the middle of the pack at the airline quality just means that, this is how that year went,” he said. “Doesn’t mean that it’s necessarily altogether bad.”