In January, people marched in solidarity with DACA recipients at the Women’s March to the Polls at the Arizona State Capitol in Phoenix. (Photo by Lerman Montoya/Cronkite News)

PHOENIX – The Arizona Supreme Court on Monday unanimously ruled that DACA recipients no longer will be eligible for in-state tuition, saying state and federal laws prohibit it.

The high court upheld an Arizona Court of Appeals ruling nearly a year after the Arizona Board of Regents announced it would continue to offer in-state tuition for undocumented students protected by the program.

Since 2015, DACA recipients have been able to pay in-state tuition at Arizona State University, the University of Arizona, Northern Arizona University and the Maricopa Community Colleges.

The Deferred Action for Childhood Arrivals program, implemented in 2012 by President Barack Obama, grants temporary status to work and live in the U.S. to young people who were brought here illegally by their parents.

On its website, the Board of Regents said that “effective immediately, (it) will no longer interpret its policies to offer in-state tuition to DACA students.”

“While people can disagree what the law should be, I hope we all can agree that the attorney general must enforce the law as it is, not as we want it to be,” Brnovich said in a statement. “As attorney general, my duty is to uphold the law and the will of more than one million voters who passed Proposition 300 in 2006.”

In 2006, Arizona voted about 70 percent in favor of Proposition 300, which declared “state-funded services and benefits, including in-state tuition and financial aid, can only be provided to individuals who have legal status.”

Supporters of the Board of Regents’ 2017 decision to grant in-state tuition to Arizona DACA recipients say the ruling is a loss for the state’s educational system.

Edder Diaz Martinez, a DACA recipient, journalism major at ASU and communications director of Undocumented Students for Education Equity, said Monday’s decision “completely puts education out of our reach and really just derails the hope and aspirations for these students to better themselves, their communities and their families.” 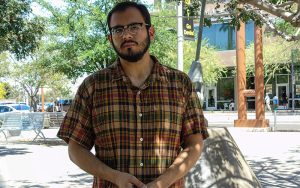 Edder Diaz Martinez, a DACA recipient and the communications director for Undocumented Students for Education Equity, said the group was created to have tough conversations and find a permanent solution for DACA recipients. (Photo by Leah Goldberg/Cronkite News)

Martinez said he would not be graduating ASU this May if not for his eligibility to pay in-state tuition. Today, as a senior in college, he pays about $7,000 for his in-state tuition, Martinez said. But this ruling by the Arizona Supreme Court doubles the tuition cost for DACA recipients.

Acknowledging DACA students at the Maricopa Community Colleges, Martinez said “not only do they have to pay out-of-state tuition now, they have to continue going to that school and then once they transfer, it will be very difficult for them to achieve.”

The community college district has been leading the fight for undocumented college students to receive in-state tuition for about three years.

“We are disappointed with the Arizona Supreme Court’s decision today,” Matt Hasson, the district’s communications director, said in an email.

“We are currently reviewing the court ruling with outside counsel to ensure the district is taking the appropriate steps to promptly comply with the court’s decision. We are also working to determine the impact this will have on our students with respect to the timeline of implementation.”

Hasson said more than 600 DACA students earned an associate’s degree or a certificate from a Maricopa community college, and this ruling is a concern for the 2,000 DACA students currently enrolled at their colleges.

“It is a disheartening decision and this all could have been prevented if we had a permanent solution – and obviously if Trump hadn’t taken away DACA, we would still be able to have a way to work legally and to continue to have a way to support our families and our communities,” Martinez said.

“Education is, what we feel, is a right and something that we shouldn’t have additional barriers to. We just think that it is important that these legislators are held accountable.”

An explanation of the Arizona Supreme Court’s ruling will be issued by May 14.