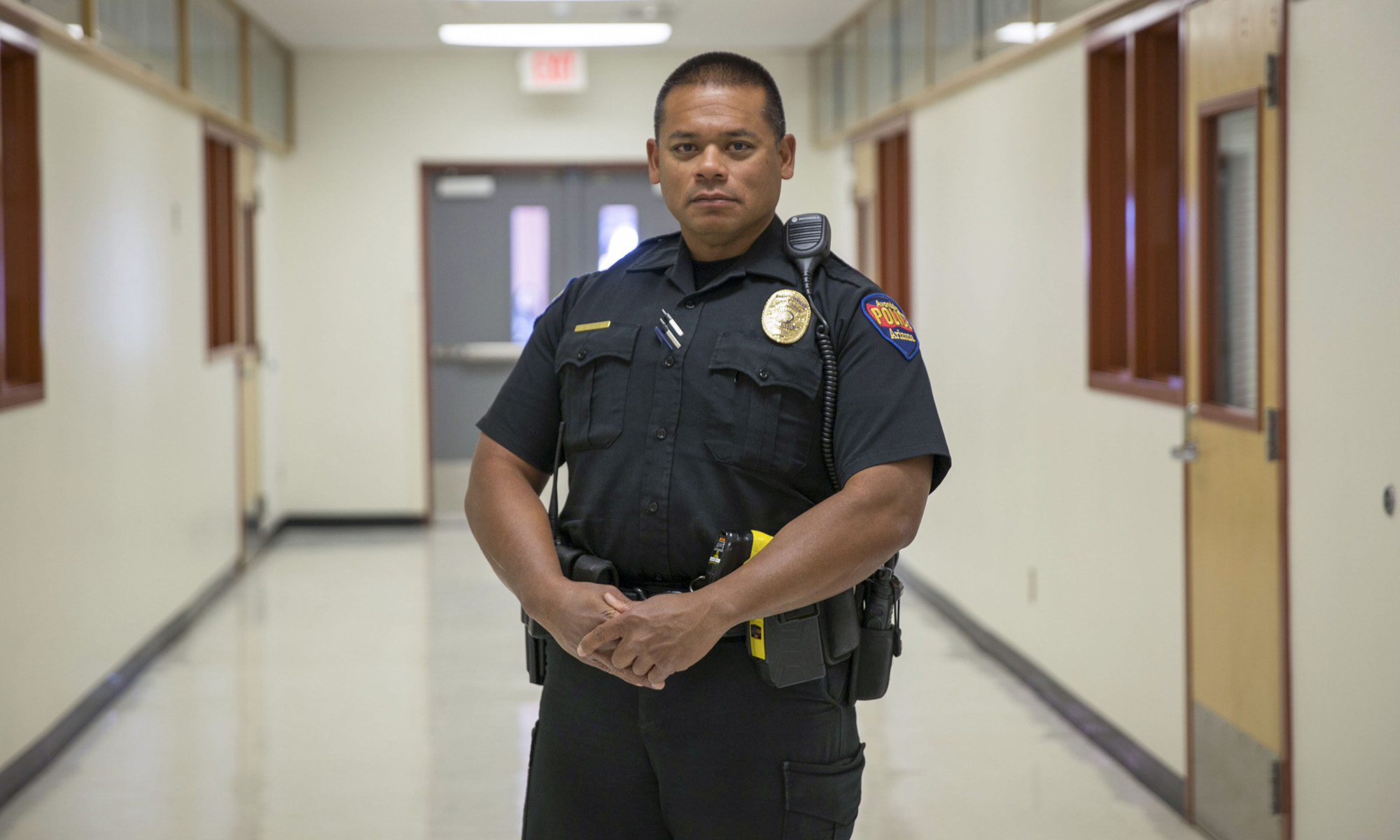 AVONDALE – Between class periods at Westview High School, police Officer Edward Toves sometimes studies the TV screens that stretch across the wall of his office, displaying footage from dozens of surveillance cameras. Other times, he stands in a hallway and chats with students – still keeping an eye out for anything that could threaten school safety.

As a school resource officer, Toves considers himself more than Westview’s first line of defense. He strives to be an educator, a mentor and a friend.

• ‘Death is not new to us’: High school gun-control activists plan Phoenix March For Our Lives
• Voices in protest: Community speaks out about gun violence

In the nationwide, student-led push for changes to gun policy change after a school shooting Feb. 14 in Parkland, Florida, Toves and other school resource officers have come into the public spotlight. While Democrats have emphasized gun control measures to improve school safety, Republicans, including Arizona Gov. Doug Ducey, have pushed for more security, including funding for law enforcement officers on campus.

That doesn’t sit well with some activists in Arizona who say school resource officers can abuse their authority over students – especially students of color – and that schools would be better off without them.

Arizona has at least 113 school resource officers in schools from Paradise Valley to Tolleson. Those SROs are funded through three-year state grants but another 15 officers are supported by federal dollars, according to a spokesman for the Arizona Department of Education, which oversees the state-funded officers. And some cities have chosen to pay for officers on campus but the education department does not keep track of those numbers.

Tim Madrid, principal at Sierra Linda High School in southwest Phoenix, part of the Tolleson Union High School District, said the proposal to add money for school security is long overdue. He stressed the importance of having a school resource officer not only to prevent violence but to forge relationships with students.

“My SRO, I want him in my classrooms. I want him educating my kids, making connections, breaking down barriers, high-fiving kids,” Madrid said. “Building those solid relationships with kids, it helps with the prevention end of safety because they now feel comfortable going to him.”

On Feb. 16, azcentral, citing Phoenix police, reported that Sierra Linda’s resource officer arrested a 16-year-old boy who had brought a loaded handgun to school. A student had tipped off the officer about the situation, police said.

Neither Madrid nor a spokesman for the district would confirm the incident or provide additional details. Phoenix police would not allow Tim Reese, Sierra Linda’s resource officer, to be interviewed. 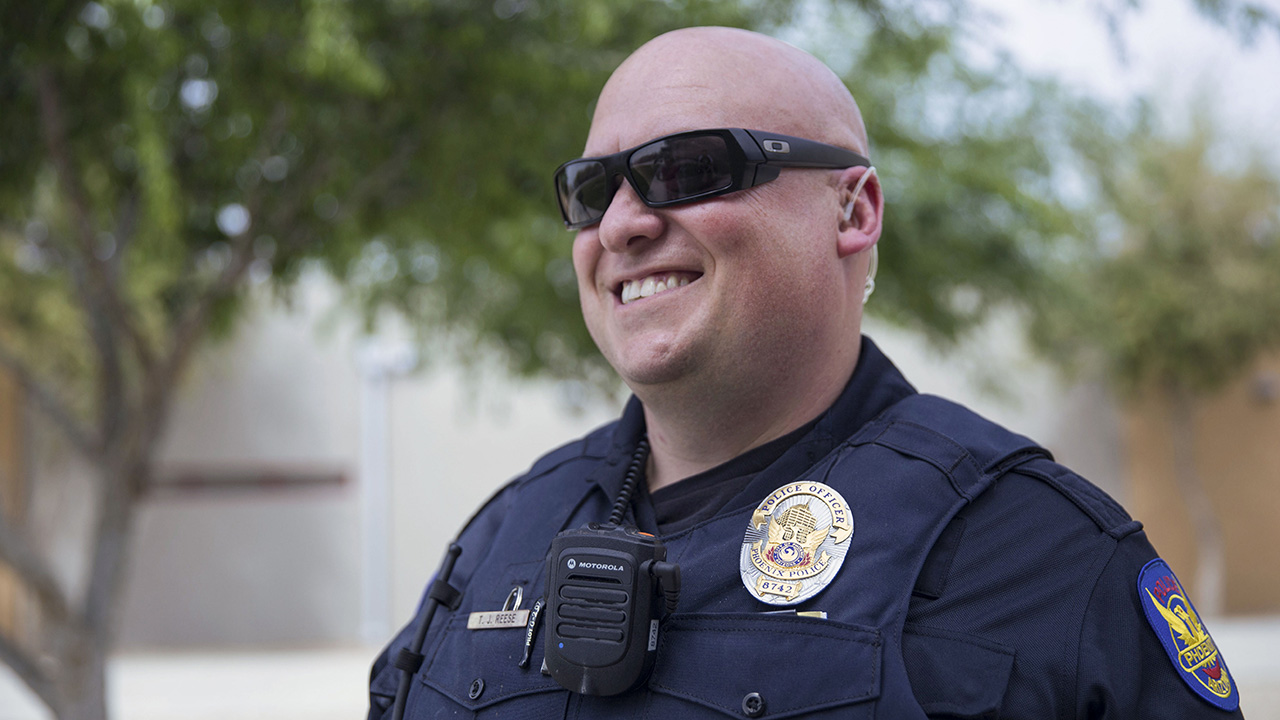 Toves, the resource officer for Westview High, also in the Tolleson district, started in the position about a month ago. So far, he said, he hasn’t had to deal with any threats or rumors of wrongdoing on campus.

Toves said resource officers with the Avondale Police Department went through critical-incident training to prepare for potential threats, such as an active shooter. The training entails mock drills on a campus, where public safety departments construct an atmosphere that resembles an actual shooting scene as closely as possible. The staged events, which take place at a high school or college campus, can involve teachers, students and actors as well as public safety officers, Toves said.

“You do move, you do have to think quickly, you have to communicate,” Toves said. “Because not only do you have to find out and do what you need to do, you need to let everyone know who’s coming, where you need to be.”

“Things could be as simple as, ‘What if I don’t want to go to school?’ What’s the legal implication for that?” Toves said. “Or smoking, buying cigarettes, or buying alcohol, those kind of things.”

Before coming to Westview, Toves worked the midnight police shift, patrolling the streets of Avondale. It was the teenagers he would run into – perhaps breaking curfew or speeding – who drew him to the job at Westview, he said.

Most of the time, Toves said, the teenagers would respond enthusiastically. He could tell the students at Westview enjoyed working with their resource officer, and that led Toves to consider whether he’d be a good fit in a position where he could act as a positive role model. It was a job that would entail more than working a regular police beat.

“Right there I was thinking, ‘Oh hey, what a positive community to work with,’ ” Toves said. “And I was hopeful that when this position came open, I could continue in that same way.”

When Westview’s resource officer retired, Toves applied. Since coming to the high school, he’s made an effort to approach each student and introduce himself.

Protests to get rid of police on campuses

But not all relationships between students and school resource officers are positive, opponents say.

Clara Valenzuela, a student at the protest, said having armed officers on campus is a “weapon against weapon” defense strategy in situations where that only leads to more violence and makes students of color more vulnerable.

Other groups opposing additional police on school campuses include the Arizona chapter of the American Civil Liberties Union, which expressed skepticism in a series of tweets March 19.

While this plan’s attempt to increase behavioral and mental resources for youth is laudable, there is alarmingly little information and detail about the addition of SRO’s to our schools. https://t.co/MDPxdsVuiP

Gov. Ducey states that Arizona students have the right to feel safe in their classrooms, but placing police in our schools won't achieve that. Adding SRO's will increase arrests of children for minor misbehaviors and funnel them out of the classroom into a prison cell. https://t.co/TXGevrSEm2

After 17 people died at Marjory Stoneman Douglas High School Feb. 14 in Parkland, authorities reported that the school’s resource officer, Scot Peterson, a sheriff’s deputy, stayed outside during the massacre without attempting to engage the shooter.

Last month in Maryland, Officer Blaine Gaskill was lauded for confronting and killing a teenager who had killed one student and injured another at Great Mills High School.

In February, a Phoenix elementary school principal said staff and students felt unsafe in the high-crime area and started a GoFundMe page to keep her school resource officer.

Stefan Swiat, a spokesperson for the state Department of Education, said the department would like to have a resource officer in every school – but that would require a great deal more funding under the state school safety program. Most recent funding for the state grants reached about $12 million, with the majority coming from Prop 301, the education funding measure passed by voters.

The average cost for one SRO, including salary, benefits and hiring costs, is more than $100,000 per year, Swiat said.

John Renouard, Westview’s principal, said resource officers are necessary to keep schools safe. He cited an experience he had working at a different school without a resource officer, where ongoing gang violence led to one student killing another off campus.

Even with 30 years of military experience, Renouard said, it was a challenge to clean up the gang activity without the help of a school resource officer assigned to the school.

“I don’t want to say it was the same as a combat zone, but it was pretty close, with my experience,” Renouard said. “Sometimes we need to have that additional authority figure just to quell some of the issues that are on campus.” 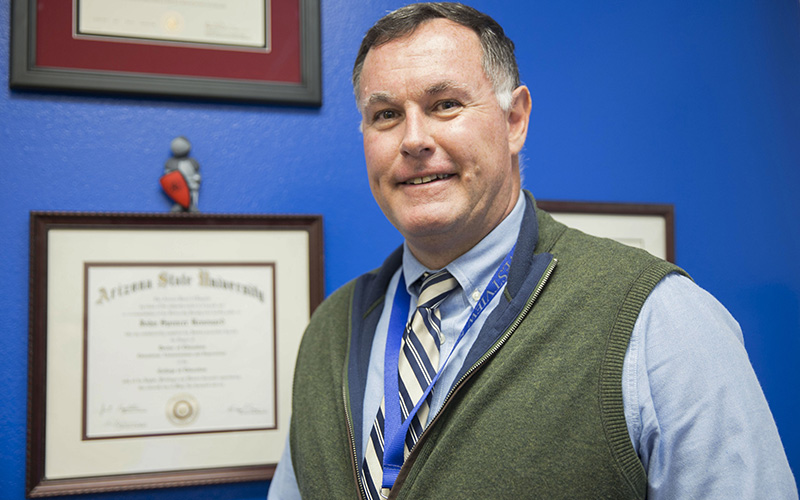 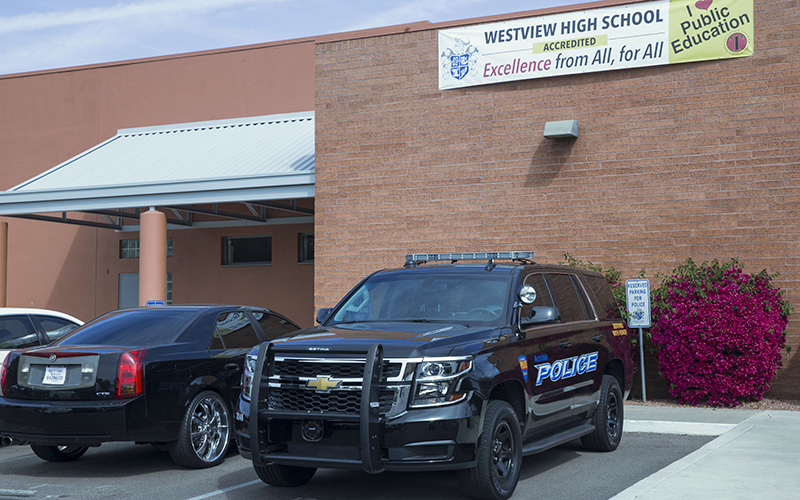 The Student Ambassadors club at Westview is made up of about 80 student leaders who work to make campus a safer place.

Jocelyn Perez, a member of the club, said the Parkland shooting showed how important it was for resource officers to form meaningful connections to students.

Toves said that beyond his daily duties providing security and education at Westview, he took the job in hopes of making a lasting positive influence on students’ lives.

He said he hoped to handle allegations of criminal activity at school in a way that’s “straightforward” and “not threatening.”

An ultimate goal, he said, was to “hopefully direct a lot of the students in a good direction for being a good citizen.”