Solange Habineza, 37, holds Old Glory after becoming a citizen. “I like to be an (American), that’s my dream when I was little,” she said. (Photo by Lerman Montoya/Cronkite News)

PHOENIX – Salvador Macias knows all too well the lengthy, complicated and expensive process becoming a U.S. citizen can be. The DACA recipient now is a Phoenix attorney who has dedicated his life to helping others navigating the road to citizenship.

Macias began his own journey when his parents brought him to the U.S. from Mexico in 1995.
Although Spanish was his first language, he quickly learned English and caught up with his classmates, showing great potential. He credits his parents for his work ethic and a passion for education.

But when Macias’ parents prepared to return to Mexico a few years later to buy a house with the money they had made in the United States, Macias’ teachers persuaded his parents to let him stay in the U.S. to explore his bright future.

Macias had a dream now: to be president of the United States.

But it wasn’t until his fourth-grade teacher, Ms. Ramirez, gave a lesson on what’s required to become president that Macias finally understood that that dream was impossible to achieve.

She told the class that a candidate for president must be at least 35 years old and a resident of the United States for at least 14 years. Then she listed the final requirement: The president must be a natural-born citizen of the U.S, something Macias is not. His dream was crushed.

Even at that young age, Macias knew he was an undocumented immigrant. His parents urged him to stay silent.

“Everyone had told me, ‘You can do anything you set your mind to,’ ” Macias recalled. “I mean, how many times do we hear that growing up? And now, over something that I have no control over – where I was born – I was being denied this opportunity.”

By the time he reached high school, Macias had become an outspoken activist for undocumented immigrants and Latino rights in Arizona. During that time, he decided he no longer wanted to be a victim, but instead represent and defend people in situations similar to his.

President Barack Obama enacted the Deferred Action for Childhood Arrivals program – known as DACA – which protects certain individuals from deportation who were brought to the U.S. illegally, most commonly by their parents, as children and qualifies them for work permits.

(Childhood arrivals to the U.S who entered the country with a tourist visa, for example, qualify for DACA if their parents also overstayed their visas.)

After DACA, Macias earned a law degree from Arizona State University, debt free, and was able to work. 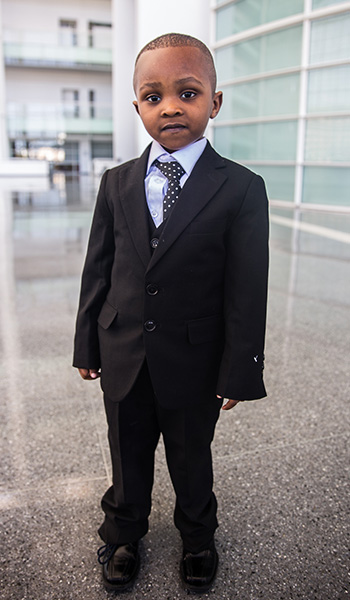 Joshua Habineza, 4, poses for a portrait at the Sandra Day O’Connor Federal Courthouse on Phoenix during his mother’s naturalization ceremony. (Photo by Lerman Montoya/Cronkite News) 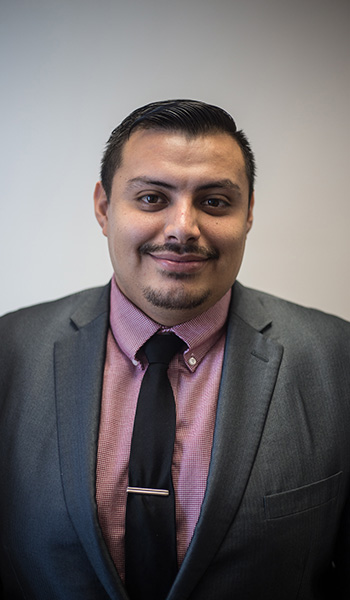 “It wasn’t a law, so it wasn’t permanent, but it was a Band Aid to this very deep wound our country faces,” Phoenix attorney Salvador Macias said, referring to DACA. (Photo by Lerman Montoya/Cronkite News)

Macias now is an associate attorney for Ybarra Maldonado & Associates in Phoenix, representing clients in immigration and criminal courts.

However, his personal future remains uncertain.

DACA was rescinded in September 2017 by the Trump administration, leaving just more than 28,000 recipients in Arizona, and nearly 1 million nationwide, in limbo.

There aren’t many ways for DACA recipients to adjust their status, Macias said, but a common way is to marry a U.S citizen or permanent resident.

• When applying for an adjustment of status, DACA recipients who entered legally do not have to leave the U.S. They can go to their local U.S. Customs and Immigration Services field office to adjust their status.

In cases specific to undocumented immigrants and DACA recipients, Macias noted there’s no clear pathway to citizenship that does not involve marriage or a three- to 10-year ban on re-entry.

“It’s a very tangled process, and that’s what most people don’t understand,” Macias said. “Our immigration system is outdated.”

During his presidential campaign, President Donald Trump vowed to reform immigration policy. Along with strengthening border security and limiting refugee resettlement in the U.S., Trump expressed the urgent need for a pathway to citizenship for qualifying immigrants, including some DACA recipients.

For immigrants with legal resident status, whether through a business-sponsored visa, refugee or asylum status, or a relative-sponsored visa, navigating the citizenship process comes with fewer twists and turns.

From Rwanda to the U.S.: A closer look at the pathway to citizenship

The Rwandan Genocide of 1994 resulted in the slaughter of more 800,000 members of the country’s Tutsi minority. Solange Habineza was only 9 when her older brothers, uncle and sisters were killed. She said she knew she wanted – and had to – leave.

In 2009, at age 24, Habineza requested a U.S green card through the Diversity Immigrant Visa Program, which was designed to encourage immigrants from countries with low rates of immigration to the United States.

After a year of waiting for her forms to be processed, she received her “golden ticket” to the United States.

Receiving her card through the “green card lottery” was bittersweet. On one hand, Habineza had always dreamed of coming to America and was excited to start her new life there, but that meant leaving her family, including her mother and younger siblings. Habineza also left her life as a high school social-sciences teacher who helped coach soccer and volleyball teams.

She made the trip to the U.S. in 2011, exchanging the mountain rainforests of Rwanda for the much flatter and nontropical state of Ohio. She started working at a Kohl’s warehouse as a product packer. Two years later, after falling in love with her husband Jean-Claude, Habineza resettled in Phoenix. She now works as a medical interpreter for refugees in the Valley.
Her main goal, she said, is to help as many people as she can. 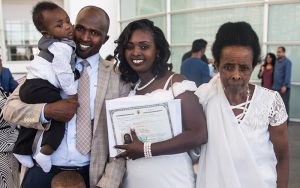 Solange Habineza with her husband, Jean-Claude, her two sons and her mother, Agnes, pose for a family portrait after her naturalization ceremony. “We share the joy and the dreams, and I congratulate her and I love her so much,” Jean-Claude Habineza said. (Photo by Lerman Montoya/Cronkite News)

But before being able to apply for citizenship, Habineza first had to wait to change her status from green-card holder to permanent resident. She had to prove to immigration officials that she had been living in the U.S. for at least five years before she could proceed to the next steps.

U.S. Customs and Immigration Services officials then conduct an interview to verify the person’s identity and to determine whether the applicant is of “good moral character.” Citizenship and Immigration mainly looks at criminal records to get a glimpse into a person’s past activity before approving them for the next steps.

Filing more paperwork, demonstrating an ability to read, write and speak English and passing the citizenship exam are the final steps before a naturalization ceremony, where new citizens take an oath of allegiance to the United States.

Unlike the 10-year citizenship process required for most undocumented immigrants and DACA recipients, the process for permanent residents could be as little as several months or close to a year.

An increase in naturalization requests nationwide is partly to blame for the longer wait.

Maria Elena Upson, a spokeswoman for the Citizenship and Immigration Services in Phoenix, said part of the reason current waiting times have increased is due to Trump’s tough stance on immigration, spawning a wave of permanent residents and immigrants applying for citizenship.

“We were at roughly six months at one time, possibly five. We are now roughly at 10 months,” Upson said. “Why are we at 10 months right now? Because we have received a huge number of applications for naturalization. Do we tend to see an increase when there’s a presidential election? Of course we do, we cannot deny that.”

According to Upson, Customs and Immigration Services has hired more workers to speed up the process, but vetting applicants has slowed the process.

“We will not compromise national security … we will continue to bestow benefits to people that are deserving and do not want to cause us harm,” Upson said. “We will always be a country of immigrants and we will welcome immigrants.”