MESA – Brenton Simmons has found his place in the burgeoning fitness industry.

The founder and face of LFTD.Lifestyle – a fitness supplement and lifestyle brand – said his desire to get into the profession was driven by reasons much deeper than financial gain.

Simmons was born with Wolff-Parkinson-White syndrome, a congenital disorder of the heart’s electrical system that causes arrhythmia. When he was 18, surgeons were attempting to correct the problem when Simmons’ heart suddenly stopped beating.

“The lower half of my heart just completely shut down and caused me to have heart failure for almost two full minutes,” he said.

The doctor and nurses were able to revive Simmons and successfully complete his surgery, but they were at a loss to say how he survived his heart shutting down.

“They didn’t really know how to scientifically explain it, but they said, ‘Call it a miracle, call it whatever you want,’ but basically it started beating again on its own,” Simmons recalled.

After the surgery, doctors advised him to avoid any activity that could raise his heart rate – as it could be fatal.

But Simmons couldn’t listen. He felt that he was given a second chance at life and wanted to help others get a second chance at theirs, too. So he transformed his passion for healthy living into a career and founded LFTD.Lifestyle. 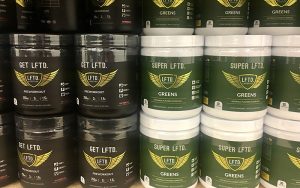 The fitness-supplement industry is projected to grow to $11.4 billion by 2025, according to Business Insider. (Photo by Tim Johns/Cronkite News)

“Even though I couldn’t make sense of why all of that was going on in my life,” he said, “I knew I probably wouldn’t have the answer as to why, but I knew that the best thing I could do was to take the bad that was in my life and try to help other people for good.”

Although LFTD.Lifestyle has turned into a success, Simmons knows he has competition. The fitness-supplement industry is projected to grow to $11.4 billion by 2025, according to Business Insider. However, his supporters say Simmons’ character is what will help him take the company to the next level.

“I see a man of principles and values,” said his mentor, Grant Sardachuk. “And this is a business that oftentimes is rife with everything from sort of outright fraud to, I would say, quasi-unethical practices, and so I know with Brenton, he’s a commitment to quality, to truthfulness, to honesty.”

But despite his success, Simmons said he still strives to be a source of
inspiration, and to ensure that some things in his company will always stay the same.

“We have to make sure we never lose sight of why we started this company in the first place.”