GLENDALE – Sandra and Dylan McKee looked around and saw a vegan wasteland in metro Phoenix.

The longtime vegan couple capitalized on the trend toward a more healthful, plant-based diet to open Veggie Rebellion, the first vegan-only grocer in Arizona. They hope the tiny store in downtown Glendale will attract customers from across the Valley.

“It is something that Phoenix desperately needs,” Sandra McKee said.

The McKees were inspired to open the store in late February after visiting Portland, Oregon, a vegan hot spot. McKee says their products are one-of-a- kind, and she reads every label to make sure they’re 100 percent vegan. The store only sells food, including some fresh produce, and drink. 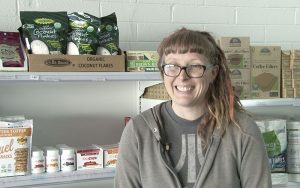 Sandra McKee, owner of the Veggie Rebellion in downtown Glendale, said she checks labels on every product in the store to make sure it’s 100 percent vegan. (Photo by Jamie Fossenkemper/Cronkite News)

Although other stores and restaurants offer vegan options, the McKees are banking on customers who are willing to travel long distances to shop at an all-vegan store.

Customers like Aubrey King of Mesa, who switched to a vegan lifestyle a year ago. He said the nearly 30-mile drive would be worth it.

“As a vegan, all of that would be so accessible, in one spot, so I would be able to get everything,” said King, who likes that he doesn’t have to worry about reading labels to be sure he’s not buying animal-based products.

“I would know that all those products would be perfect for what I am looking for, so I would definitely want to go there over a supermarket,” King said.

Businesses that promote vegetarian or vegan diets accounted for 17 percent of product launches in the U.S., compared with 6 percent five years ago, according to Innova Market Insights.

Stefan Ruediger, an economist at the W.P. Carey School of Business at Arizona State University, said it’s difficult to determine whether the Glendale grocery will succeed in the long run.

Ruediger said a different location, such as Scottsdale, ranked by Wallethub last year as eighth in the country for vegan friendliness, might have been a better location for a vegan grocery store.

“We have a theory in economics that stores and products that are similar to each other should locate very close to each other because, in that case, we already know that there is an established customer base,” he said.

Still, Veggie Rebellion could be the start of something big.

“One store always needs to make the start for something else to develop,” Ruediger said.