NIPTON, Calif. – A Phoenix company is using trash from the 2015 Super Bowl hosted in Phoenix to make durable, energy-absorbing concrete to rebuild a small township in the Mojave Desert.

American Green Corp., which builds vending machines for marijuana products, purchased the small township last summer for $5 million. The company is investing in methods to make the town among the first zero-waste cities in the country, project manager Stephen Shearin said.

The company is using trash from Super Bowl XLIX and Nipton’s own refuse to develop the vision of Hollywood geologist Gerald Freeman, Shearin said. Freeman and his family purchased the town in 1984, with plans to create an environmentally self-sufficient area of California. American Green purchased the 120-acre township near the California/Nevada line after it had been on the market for a few years.

Eighty acres are home to Nipton’s market, cafe, hotel and trailer parks; the remaining 40 acres are devoted to solar panels. 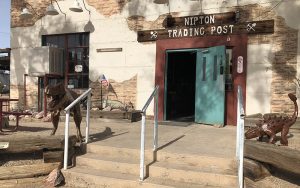 The recently updated Nipton Trading Post is the tiny town’s only market. Without it, residents would have to travel 50 miles to the nearest bigger town. (Photo by Micah Bledsoe/Cronkite News)

“We put this into a concrete mixture to create what we call American Greencrete,” Shearin said.

Nipton is an unincorporated community in San Bernardino County and must comply with county ordinances. County spokesman David Wert said the town could use a sustainable infrastructure to help bring people back to the county’s scenic and recreational opportunities, adding that Nipton “has had a depressed economy or maybe a zero economy for some time.”

“In fact, we’d encourage (redevelopment) for people who are interested in making an investment for a community that needs it,” Wert said.

When American Green announced it was buying the town, initial news media reports indicated it planned to turn the town into the first cannabis company town.

Leafly, a cannabis industry website, described company towns as those where a “corporation employs most of the residents and owns nearly all the houses, stores and amenities.” Few company towns exist today.

That doesn’t fly with Wert. Although San Bernadino County supports investments in community, he said, it wants no part of the marijuana business. 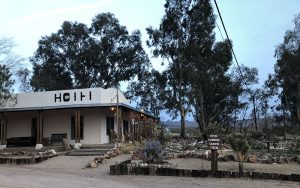 “It’s just the issue of, to what degree and how they intend to incorporate cannabis into that equation,” Wert said.

American Green’s Shearin said the company wants to work with the county to produce the “best possible Nipton and the best possible model” to help San Bernardino become more sufficient.

“We believe we can create a road map for them (San Bernardino County) to simplify their work with other towns like this, cannabis or no cannabis,” he said, adding that the company has no plans to grow or cultivate marijuana in Nipton.

American Green plans to do more than turn trash into concrete. It’s also renovating an old schoolyard and reusing rainwater.

Company officials plan to turn the school into an educational center where they can teach people “not just the products and methodology, but the architecture and the general culture that brings people in,” Shearin said.