SCOTTSDALE – The uncertainty surrounding DACA’s future is wreaking havoc beyond the nearly 800,000 young immigrants whom the program shields from deportation.

The restaurant industry, in particular, would take a tremendous economic loss if the Deferred Action for Childhood Arrivals program ends.

Louis Basile, founder and CEO of the Wildflower Bread Co., hopes that his speaking out on the issue will prompt more discussion of DACA recipients, also known as DREAMers.

“For me, it’s really encapsulated in one simple thing: They are a part of this country and we need to remove the uncertainty that somehow suggests that they’re not an integral part of what makes America great,” Basile said.

Wildflower Bread has grown to 14 locations in the past 22 years, and he’s opening an additional three. Employees protected by DACA have been an integral part of the company, Basile said, and he hopes sharing his thoughts on the DACA debate will shed light on the issue. 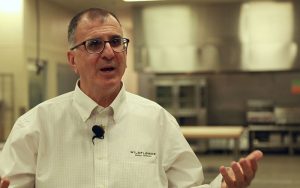 Louis Basile is the Founder and CEO of the Wildflower Bread Company. (Adriana De Alba/Cronkite News)

In December, Basile wrote a letter to U.S. Senator John McCain, R-Arizona, in which he urged McCain to find a long-term solution for those immigrants in limbo. DREAMers make up more than 5 percent of his employees, Basile’s letter says, and they tend to stick with the company longer: 57 percent of the DREAMers work at his company for more than three years. Collectively, they account for the company’s highest retention rate.

One of those employees is Claudia Gutierrez, who started in the sanitation department. Now, Gutierrez holds a managerial position as the company’s head pastry chef.

“I love what I do. I love pastries but the main thing is we are like a family that cares for each other and they give you the chance to grow,” Gutierrez said.

Wildflower Bread is where she found someone to lean on – Basile, who has been a support system for Gutierrez amid her fear of losing DACA.

“As soon as we start hearing about (President Donald Trump’s order to suspend) DACA, he helped me a lot with all the information that I need to know and he gave me his support, so I feel really happy and grateful that he’s one of the persons that cares,” Gutierrez said. 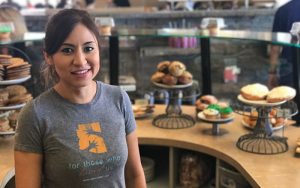 One of the arguments held by DACA opponents is that DREAMers and undocumented immigrants are taking jobs that could go to U.S. citizens. However, Basile described the biggest challenge he faces as a restaurant owner is finding employees to run his restaurants.

“The simple reality is, we need employees,” he said. “Some of our best employees are our DREAMers and our DACA employees and the bottom line is, that if we don’t have enough people and we can’t grow the business, then we can’t do all of the things that we do.”

James Garcia, director of communications at the Arizona Hispanic Chamber of Commerce, said undocumented immigrants often are those willing to do work nobody else wants to do.

“The reality, of course, is that right now we have full employment in the (Arizona) economy,” Garcia said. “We also have present in this economy 10, 11 million undocumented immigrants, most of whom are working. So if you do the math, we’re at full employment and many of these immigrants are working, and so they’re not taking jobs, they’re filling jobs that would not be filled otherwise.”

The restaurant and food industry is the No. 1 employer of DREAMers. The New American Economy, a bipartisan group of mayors and business leaders concerned with immigration reform, estimated DACA-eligible employees make up 18 percent of the restaurant industry.

Although ending DACA would have an economic impact on Basile and his business, he said it really boils down to a humanitarian issue. Although he was born and raised in the United States, he described the many ways in which he relates to Gutierrez, his pastry chef, and all DREAMers.

“The DREAMers are the American dream,” Basile said. “They want to work hard, they don’t mind starting at the bottom and working their way up. You heard from Claudia, where she started. That’s not dissimilar to my situation.

“I started in the restaurant business as a dishwasher and here I am as the founder of the Wildflower. So that dream exists. However, we have to give people the opportunity to actually achieve that dream.”