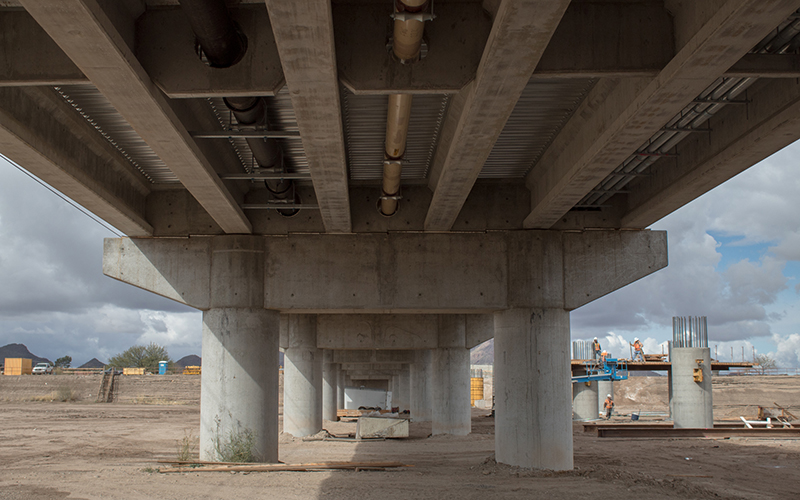 Transportation experts say Arizona’s 8,000 or so bridges are safe, but nearly 400 are being monitored for possible structural problems. (Photo by Melina Zuniga/Cronkite News)

PHOENIX – Arizona’s bridges generally are safe, experts say, even though the federal government says nearly 400 of them are in poor or “structurally deficient” condition.

Bridge safety gained national attention Thursday when at least six people died after a pedestrian bridge collapsed on the Florida International University campus in Miami. The bridge collapsed while workers were tightening loose cables, according to tweets from Florida Sen. Marco Rubio. Efforts on Friday still were underway to clear debris, but officials said there were no more survivors, according to the “Washington Post.”

Doug Nintzel, a spokesman from the Arizona Department of Transportation, declined an interview but said in an email that the public should “keep in mind that yesterday’s tragic event in Florida was a construction accident involving a pedestrian bridge.”

Ninztel said the department did not want to speculate about the collapse, but there are no “ADOT bridges that have been constructed using the method used in Florida.”

Rubio said the bridge was intended to be a “one-of-a-kind engineering design,” according to “USA Today.”

A spokeswoman for the highway administration said neither of those designations means a bridge is unsafe for travel, just that it’s being monitored.

Pingbo Tang, a professor in Arizona State University’s School of Sustainable Engineering and the Built Environment, said Arizona bridges in general are safe, as the state does not face many natural disasters that could damage them.

The main issue in Arizona, he said, is scouring, which is the erosion of soil around a bridge’s foundation.

“The special time is going to be in the summer,” Tang said. “In September, it’s heavy raining … in that time, the bridge is going to have some kind of water flow and then possibly create (scouring).”

“Arizona’s bridges are generally in good condition due to the bridge inspection program; however, funding to maintain them and to support the state’s above average growth rate will be a major issue in the years ahead,” the report card states.