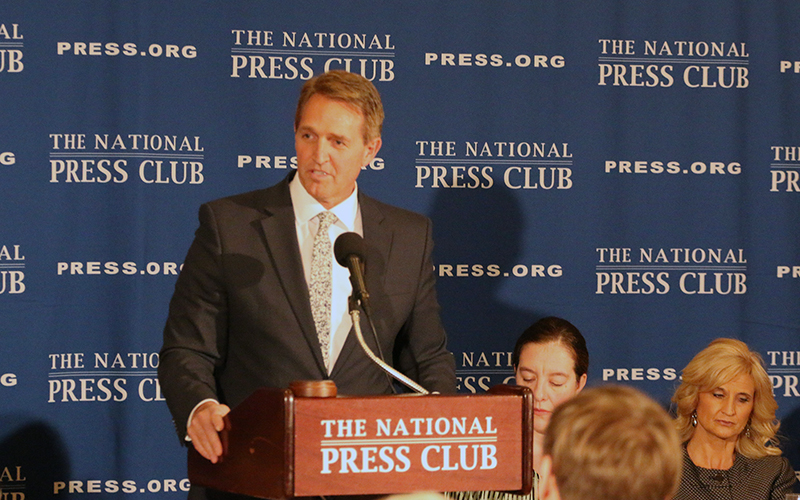 Sen. Jeff Flake, R-Arizona, told a National Press Club audience Thursday that the Republican Party has abandoned its “deeply held beliefs … in the face of the nativist juggernaut” that is President Donald Trump. (Photo by Philip Athey/Cronkite News)

WASHINGTON – Outgoing Arizona Republican Sen. Jeff Flake doubled down Thursday on his criticism of President Donald Trump and the GOP’s “seeming amnesia” in the face of Trump’s attacks on democratic institutions.

“It is a measure of how far we have fallen that we must fight for the basic ideas of American liberty and the preservation of basic norms such as, the attorney general is not the president’s personal lawyer and the FBI director does not owe the president personal loyalty … to name but two,” Flake said.

The speech at the National Press Club came one day before Flake was scheduled to speak on “country over party” at the “Politics and Eggs” breakfast in New Hampshire, an event that bills itself as a “forum for presidential candidates, political leaders and other political analysts.”

Flake, who is not running for re-election this year, said Thursday that he does not currently plan to challenge Trump in 2020, but also would not rule it out. Experts said the trip to the first-in-the-nation primary state could mean Flake is testing the presidential waters, but that his chance of winning such a race would be “infinitesimal” in the words of one analyst.

“Right now President Trump is the most popular person in the Republican Party,” said Nathan Gonzales, editor for the Rothenberg and Gonzales Political Report. He said that if Flake runs, “he will lose.”

Flake did not appear to be currying favor with his party in Thursday’s speech, which was highly critical of the GOP accepting Trump’s “anomalous behavior” for political expediency and an appeal to nationalism and populism.

“Never has a party abandoned, fled its principles and deeply held beliefs so quickly as my party did in the face of the nativist juggernaut,” Flake said. “We have become strangers to ourselves even as we pretend everything is fine.”

Flake, who served as executive director of the Goldwater Institute before being elected to the House in 2000, said that conservatives in Congress “used to be very clear about their institutional prerogatives and their obligations under the Constitution. I should emphasize used to be.”

He went on to ask whether Republicans even deserve to hold political power.

“If my party is going to try and pass off the degradation of the United States and her values from the White House as normal, if we are going to cloister ourselves in the alternative truth of an erratic leader,” he said, “then my party may not deserve to lead.”

While it may not be him, Flake does think a “true conservative” should challenge the president in 2020 “for no other reason (than) Republicans want to be reminded, I think of what conservatism really means.”

Despite Flake’s claim that he is not planning a challenge to Trump, analysts said his trip to New Hampshire raises eyebrows.

Geoffrey Skelley, associate editor for Sabato’s Crystal Ball at the University of Virginia’s Center for Politics, agreed that if Flake is “visiting New Hampshire, obviously he’s at least considering the idea” of a presidential run.

But he and Gonzales doubted that he will actually run.

Arizona Republican consultant Jason Rose does not think Flake is even seriously considering a 2020 bid, saying his speaking engagements are more reminiscent of the farewell tour of an aging rock bands.

“This is an aging rock star saying goodbye to his fans, what fans he has,” Rose said. “The only reason he would do it is vanity.”

Rose believes that if anyone is going to challenge Trump in the Republican primary, it will be Ohio Gov. John Kasich, one of many Republicans who failed to win the party’s 2016 nomination.

All three analysts said the chances of Flake actually defeating Trump in a Republican primary are “infinitesimally small.” Rose put Flake’s chances of beating Trump after two years out of office at “less than zero.”

Skelley said that if Flake’s goal was not to beat Trump in the primary but to damage his ability to win re-election in the general, “maybe he should run.”

Flake, in the meantime, said he will use whatever time he has remaining in politics to speak his conscience.

“It seems at times that speaking in measured tones in the face of routine vandalism to our democratic norms is about the same as whispering into a hurricane,” Flake said Thursday. “But we must speak out, for politics that keep us silent when we should be speaking is worthless in the defense of things we hold most dear.”

Despite his deep concern for the state of American politics, Flake said he does see hope in the future after the “unpredictable storm” that is Trump’s presidency.

“In the wake of this storm, we will once again make clear to our allies that we are allies and we will never again be afraid to remind friend and foe alike that it is our values that make America, America,” he said.