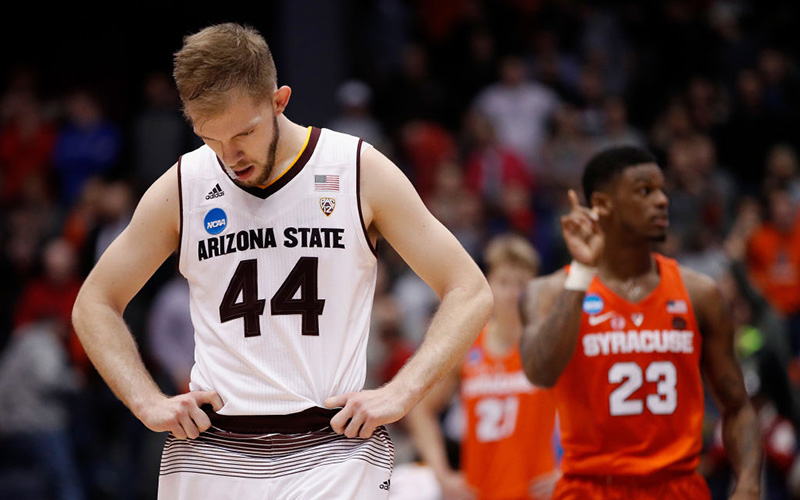 Arizona State’s Kodi Justice reacts in the second half against the Syracuse Orange during the First Four of the 2018 NCAA Men’s Basketball Tournament. The Sun Devils were eliminated after a 60-56 loss. (Photo by Joe Robbins/Getty Images)

DAYTON, Ohio — Once the top story in college basketball and nearly the top-ranked team, Arizona State made the NCAA Tournament by the skin of its teeth. All the naysayers and critics didn’t matter, just the fact that the Sun Devils had at least one more game to prove themselves.

But although you can wipe the slate clean, the things that dirtied it can’t be erased.

The Sun Devils saw their season end at the hands of the Syracuse Orange 60-56 in the final First Four game in Dayton Wednesday, seeing many of the issues that put them on the tournament bubble cost them.

While ultimately unsuccessful in terms of on-court results, senior guards Tra Holder, Shannon Evans and Kodi Justice brought something that has evaded the program just as much: national prominence.

As Justice, Evans and coach Bobby Hurley sat upon the dais after the loss, the emotion was evident on their faces. It was just beginning to register that they would never compete for Arizona State together again.

So, it had to be asked. What has your college career meant to you?

Evans, fighting back tears, took a second and finally replied.

“Personally, mine’s meant everything to me,” Evans said. “The opportunity that coach Hurley gave me, it’s something I’ll never forget.”

Hurley later echoed those sentiments, looking back on his three years with Holder and Justice and five with Evans, but also looking to the future of Sun Devil basketball.

“My heart’s broken really that I can’t coach Shannon Evans and Tra Holder and Kodi Justice anymore. And that’s sadly disappointing for me,” Hurley said. “I have such a connection with them. And it’s part of — a great part of coaching that you can build those type of bonds. And I hope I can continue to find guys like them. And if I do that, we’ll be in tournaments like this quite a bit moving forward.”

On its ascent to 12-0, most of ASU’s opponents played man defense, allowing Holder, Evans II and Justice to shake off defenders and get open looks, many coming from beyond the 3-point arc.

In Pac-12 play, teams switched to zones and slowed down the high-powered Sun Devil offense that grabbed headlines.

Syracuse and coach Jim Boeheim have made their money on a patented 2-3 zone defense that suffocates offenses.

“Syracuse dragged us through possessions and went deep in the clock, and to their credit, the way they defend and how good they are at it, we had to use more time in a possession and be patient and then find a good shot even if that meant that was as the clock was winding down,” Hurley said. “I’m telling you, when you’re in that zone, there’s a pass that’s open. And if it isn’t executed at the right moment, it’s going the other way. We had a couple of those work against us as well.”

As the game wore on, that didn’t seem to matter. ASU opened the second half with an 8-0 flurry that gave it a lead and control just 89 seconds into the second stanza.

But one of the bugaboos that haunted the Sun Devils all season came back again.

For all its success, ASU only won three conference games by 10 or more points, relying on close games nearly all conference season long. No matter how in control the Sun Devils seemed to be, it was always an adventure late.

The Sun Devils led by as many as seven points with seven minutes remaining after Justice hit an open 3-pointer from the left side. But the Orange never went away, immediately going on an 8-0 run to take the lead back.

And in close games, eyes almost always go to free throw shooting. That was something the Sun Devils could hang their hats for most of the season, but lately that has not been the case.

“It was across the board,” Hurley said. “It wasn’t one guy. In a game like this, and I said it was a defensive-oriented game, and I thought it could end up going in that direction based on our opponent and their style of play. And you have to knock down your free throws.”

Interestingly, that 30 percent clip is the same as Justice’s over his final three games, a stretch that began with him missing three in the final 20 seconds of a loss to Stanford that could have cemented ASU’s place in the NCAA Tournament.

Instead, the Sun Devils had to come to Dayton.

And soon made a quick return home.