Protestors (from left) Kim Archer, Cindy Harrison, Robin Kemp and Janette Archer stand in silence, wearing costumes from “The Handmaid’s Tale” during a Planned Parenthood demonstration near the Capitol in Phoenix. (Photo by Jesse Stawnyczy/Cronkite News) 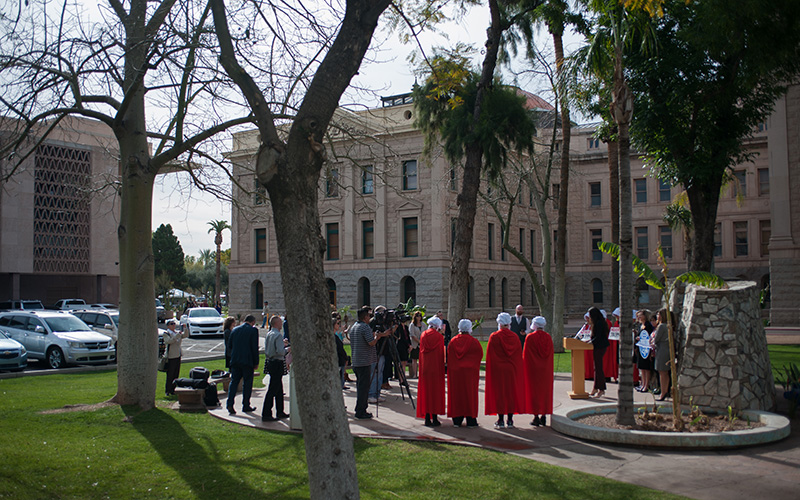 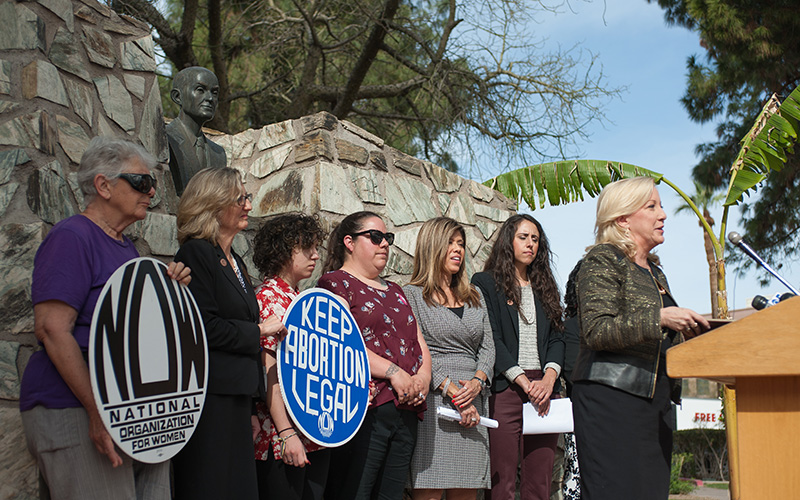 Jodi Liggett, executive director of Planned Parenthood Advocates of Arizona, speaks at a demonstration against Senate Bill 1394 at the Capitol in Phoenix. (Photo by Jesse Stawnyczy/Cronkite News)

PHOENIX – Supporters of abortion rights spoke out Tuesday against a Senate bill that would require women seeking an abortion to answer detailed questions, such as the reasons they want to end their pregnancy, before undergoing the procedure.

Eight women stood silently on both sides of a lectern outside the state Capitol, wearing red cloaks to evoke the book and television series “The Handmaid’s Tale,” which depicts a dystopian future under a theocratic dictatorship. 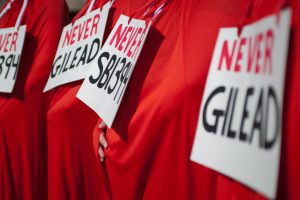 Demonstrators at the Capitol in Phoenix donned costumes from “The Handmaid’s Tale” to protest abortion restrictions in Senate Bill 1394. (Photo by Jesse Stawnyczy/Cronkite News)

Rep. Athena Salman, D-Tempe, said the bill’s questions about the reasons for the abortion are invasive.

“The questions pretty much put the government between you and your doctor,” she said.

The bill requires physicians to ask such questions as whether a woman wants to terminate a pregnancy for economic reasons; not wanting children at the time; becoming pregnant because of rape or incest; and such relationship issues as abuse or divorce.

Although doctors would have to ask those questions, the bill would allow women to refuse to answer them.

Cathi Herrod, president of the Center for Arizona Policy, a socially conservative lobbying group, said the bill would make data about abortions easier to acquire.

“It’s simply trying to define better why women are having an abortion, exactly what complications may be occurring from an abortion,” Herrod said in an interview last month. “That will enable, regardless of where you are on the issue of abortion, but policymakers, health care professionals and pro-life and pro-choice people to better meet the needs of women.”

Serena Kneirim, who said she received an abortion at a Planned Parenthood clinic, said it’s no one’s business why she had the procedure.

Had Planned Parenthood not been there, Kneirim said at the Capitol, “I would’ve gone home and tried to figure it out on my own, I would not have stopped until I was no longer pregnant.”