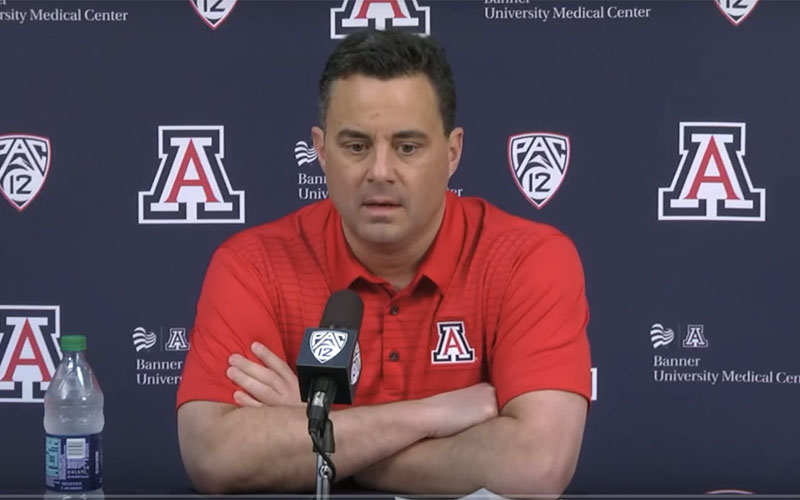 Sean Miller thinks highly of the Buffalo team his Arizona Wildcats will face in the first round of the NCAA Tournament. The Bulls are averaging 84.8 points, the seventh most in the country. (Photo courtesy Arizona Athletics)

TUCSON – University of Arizona men’s basketball coach Sean Miller discussed a variety of topics Monday afternoon, but it was the topic Miller didn’t discuss that likely will get the most attention.

With the Wildcats preparing for Thursday’s matchup against Buffalo in the first round of the NCAA Tournament, Miller was asked Monday if he had any comment about the much-publicized ESPN report by Mark Schlabach that claimed an FBI wiretap uncovered Miller speaking about offering $100,000 to star player and future NBA first-round pick DeAndre Ayton.

But he offered much more on a variety of on-court topics, including how his team matches up against Buffalo and the Pac-12 Conference’s representation in the NCAA Tournament.

Fresh off of Saturday’s Pac-12 Tournament championship victory over USC, the fourth-seeded Wildcats (27-7) will face off against Buffalo (26-8) on Thursday evening in Boise, Idaho.

Buffalo punched its ticket to the tournament with a 76-66 victory against Toledo in the Mid-American Conference championship game, also on Saturday.

“We’re dealing with a confident team,” Miller said of Buffalo. “They’re difficult to defend, they strike in transition and they know how to defend.”

Buffalo is averaging 84.8 points per game this season, good enough for seventh-best in the country. The Bulls shoot 47.4% from the field and 37.1% from three-point range. Miller said their style of play reminds him of teams he’s played against this season.

“They have outstanding guards, a lot like other teams in our conference,” Miller said. “They do a really good job of having a wing player playing the four (position).”

“It’s not just a point guard or a two, they have three or four guards playing at a time.”

Arizona guard Rawle Alkins said the team isn’t familiar with Buffalo yet, but they’ll use the next couple of days to parse through scouting reports in preparation for their first-round matchup against the Bulls.

Miller said that he looks at the early rounds as a four-team tournament to make it to the Sweet 16, and doesn’t look too far ahead.

Arizona has yet to make a Final Four with Miller as head coach, but he said he doesn’t think too much about that.

“If you start to think about it, you’ll never make it,” Miller said.

Arizona is one of three Pac-12 teams to make it into the tournament — Arizona State and UCLA being the other two — and Miller said he’s happy to see his intra-state rivals make it into the Big Dance.

“I’m glad that ASU is in,” Miller said. “They deserved it. I think UCLA and ASU will be difficult for anybody to play against.”

Miller also noted that he thinks the selection committee should’ve added a fourth Pac-12 team into the tournament.

Alkins shared the same thoughts regarding the Pac-12’s representation in the tournament.

“I think the Pac-12 is a great conference and we have great players,” Alkins said. “There are some teams that made the tournament that make you just wonder why.”

“I think there’s a lot of teams in the Pac-12 that could’ve easily made it.”