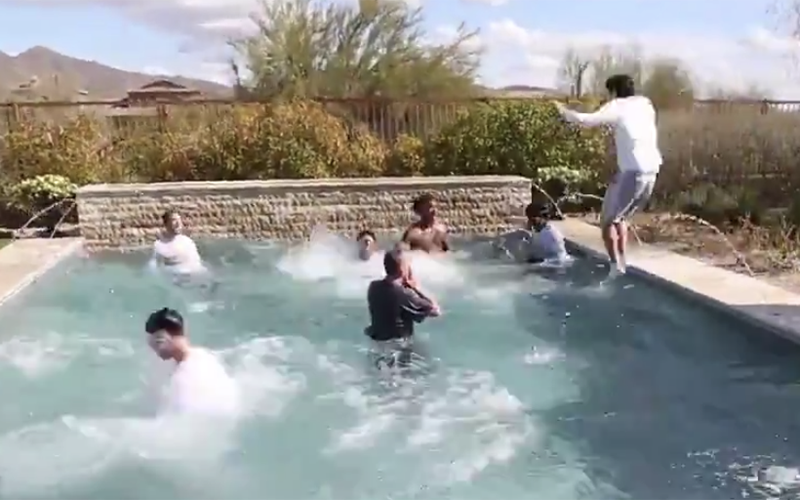 Arizona State coach Bobby Hurley and several of his players jump in a pool after learning the Sun Devils were selected for the NCAA Tournament. They will face Syracuse on Wednesday in Dayton, Ohio. (Photo courtesy ASU men’s basketball Twitter account)

For the first time since the 2013-14 season, the Sun Devils are going to the NCAA Tournament. On Sunday, it was announced that ASU earned a bid to the Big Dance, where it will take part in the First Four Round as a No. 11 seed. The Sun Devils will face Syracuse in the play-in game set for Wednesday at 6:10 p.m. (Mountain Standard Time) in Dayton, Ohio. The winner will move on to play No. 6 seed Texas Christian.

The appearance marks the first time ASU will play in the tournament under Hurley, who’s in his third season at the helm after being hired in 2015.

“We started this journey, this year, with a goal,” Hurley said. “Our mission was to try and get into the NCAA Tournament. We accomplished that. It’s a tremendous feeling. To watch and experience that, it’s second to none. It’s why you put it in and pay your dues and all the sacrifices these guys have made to put themselves in that position.”

For weeks, Hurley maintained confidence that the Sun Devils had done enough during their non-conference slate to earn a bid to the NCAA Tournament. This, despite their struggles throughout Pac-12 play and even as ASU bowed out of the conference tournament in the first round against Colorado.

Hurley has admitted that his confidence dwindled as he watched other conference tournament games took place across the country throughout the week. He even had a list of teams he was watching closely.

“It was excruciating,” Hurley said. “That’s the word I’m going to use to sum up how I felt for the last three days. Just you’re watching so many games, you’re thinking about possibilities, which teams are winning, which teams are losing, and how that impacts your chances. I knew it was going to go right down to the wire based on how we finished the season. We lost a lot of close games and didn’t finish right, but we have a chance to redeem ourselves now.”

ASU, which began the season unranked, skyrocketed to No. 3 in the Associated Press poll, achieving its highest rank since the 1980-81 season.

The Sun Devils began the season going a perfect 12-0 through the non-conference slate, a stretch that set a program record, and included victories over NCAA Tournament No. 1 seeds Xavier (on a neutral court) and Kansas (on the road at Allen Fieldhouse). Each win proved key in ultimately determining ASU’s fate, as both Kansas and Xavier were unveiled as tournament top seeds.

For a few hours, ASU was the last remaining undefeated team in the nation before losing its first contest of the season at Arizona on December 30. However, the Sun Devils posted an 8-11 mark during Pac-12 play and finished ninth in the conference standings.

Justice and Holder, both four-year guards who’ve played their entire careers at ASU, asserted they’re back to being considered the underdog — a position they feel worked favorably for them.

“We’re the hunter now,” Justice added. “We’re going out, we’re going to hunt people. We’re going out to fight. We’re not going to hold anything back. We had a bumpy end to the season, so we have more to prove.”

For both players, it was nerve-racking to nearly see an opportunity to compete in the tournament vanish, but satisfying to be rewarded for their hard work over the years. The two drove together to watch the bracket unveiling at Hurley’s home, and picked up three donuts each on the way to ease the nervousness.

“Just to be able to make it and say that we’re in the tournament, it’s a great feeling,” Justice said. “… It was definitely nerve-racking.”

Once the Sun Devils’ name appeared on the television screen, the tension was lifted and the celebration began.

The Sun Devils have predominantly struggled against zone defenses this season, a trademark of Syracuse coach Jim Boeheim’s philosophy. Nonetheless, Hurley sees the matchup as a silver-lining to possibly not even getting the opportunity to compete in the tournament.

“If you’re in the tournament, that’s all that matters,” Hurley said. “We’re in Dayton and that means we have a chance to compete for a championship. If your name wasn’t called, then you can’t do that. We’re going to try and attack the game, and I know that our guys, based on the meetings that we’ve had the last couple days, and the practices, that they’re highly motivated and looking forward to an opportunity to play in an NCAA Tournament.”

The team’s performance this season earned the respect of “Jumpin” Joe Caldwell, the former ASU standout who played for the team in the early 1960s.

– Chancellor Johnson contributed to this report.