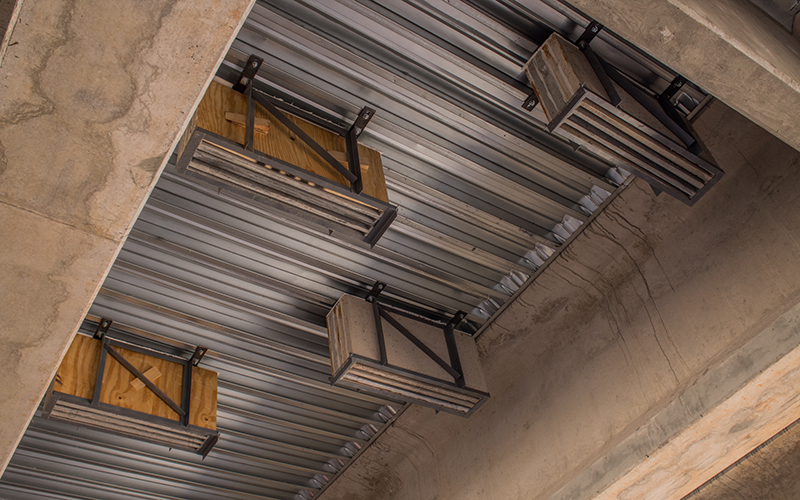 The new Houghton Road bridge in Tucson has been retrofitted with hanging bat boxes that can hold 500 to 1,000 bats per crevice. (Photo by Melina Zuniga/Cronkite News) 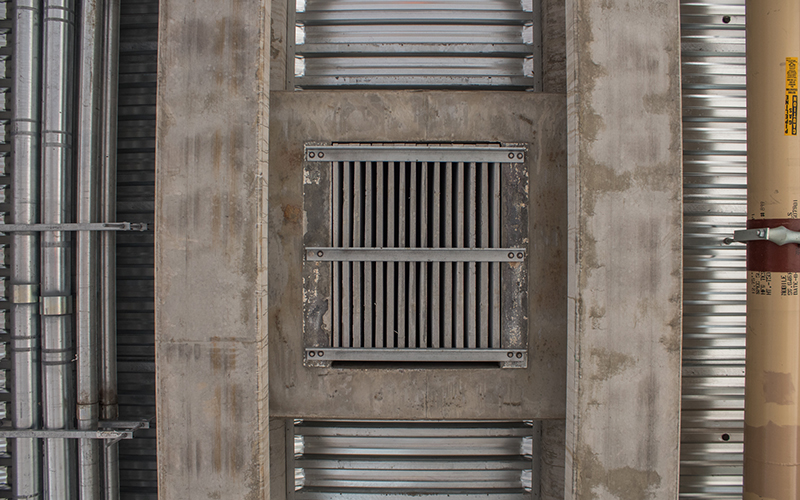 Enclosing bat boxes within the concrete of the new Ina Road bridge in Marana will stabilize temperatures for the bats, similar to that of caves. (Photo by Melina Zuniga/Cronkite News) 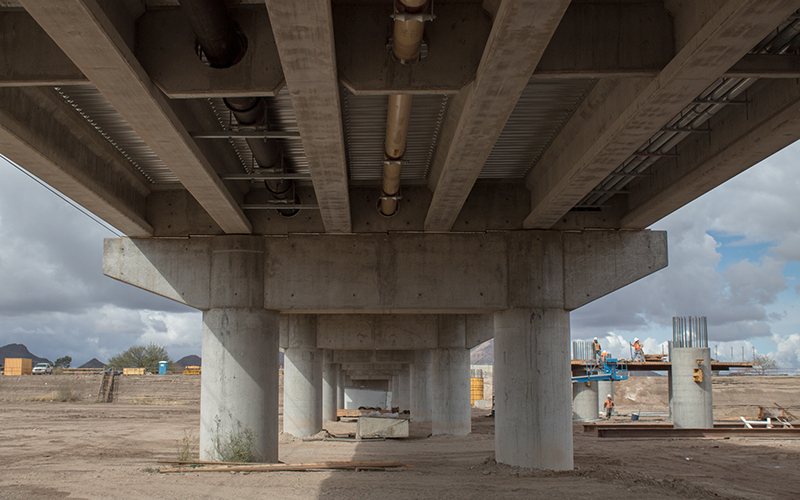 Eleven bat boxes were included in the design of the Ina Road bridge in Marana. Nine are under the eastbound stretch; two more are planned for the westbound stretch. (Photo by Melina Zuniga/Cronkite News)

MARANA – Most people believe bats primarily live in caves, but the concrete crevices under the old Ina Road bridge in Marana have provided thousands of migratory Mexican free-tailed bats with perfect roosting habitat for years.

However, the crevices – the bats’ usual winter and summer homes – are gone due to construction and replacement of the bridge, which began in 2016, according to the Arizona Department of Transportation.

Instead, the Ina Road bats will come home to newly designed bat boxes engineered specifically to fit directly within the concrete structure of the new eastbound Ina Road bridge – just in time for migration season.

In a refuge from external climate, the roosting bats can slow their metabolism and use as little energy as possible, just as they used to in the bridge’s crevices, said Joel Diamond, a senior project manager with the Arizona Game and Fish Department.

The old bridge, along a migratory corridor for about 25,000 bats, was deemed unsafe by officials several years ago, Diamond said. And the new Ina Road bridge, now flat-bottomed, initially wouldn’t have the same nooks and crannies that protected the bats from Arizona’s hottest days and coldest nights.

But because of the combined efforts of environmental agencies, city officials and engineers, the bats – integral to agricultural pest control – don’t have to relocate this migration season. 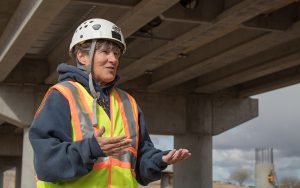 Sandy Wolf, a wildlife biologist who specializes in bats, suggested incorporating bat boxes into the design of the new Ina Road bridge in Marana. (Photo by Melina Zuniga/Cronkite News)

The Ina Road bridge is the first in Arizona to incorporate a design innovation in which bat habitats are prioritized during construction instead of after completion, said Sandy Wolf, a wildlife biologist who has studied bat habitats in Tucson for decades.

“I’m hoping that this becomes a widespread practice,” Wolf said. “It’s been a very positive step.”

There are a couple thousand bats in nine boxes now, but Diamond, Wolf and many others involved with the project hope to see more boxes installed, and at least 20,000 tenants by peak migration time in July. 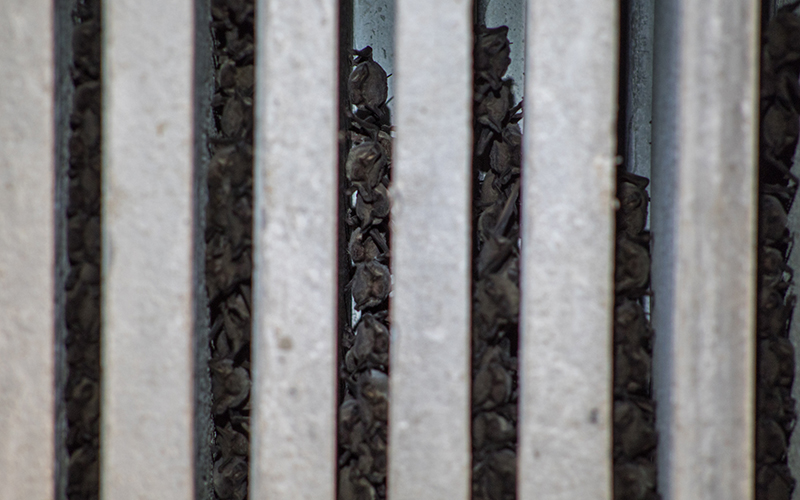 The concrete around the new bat boxes on Ina Road in Marana will provide a stable microclimate for migrating bats. (Photo by Melina Zuniga/Cronkite News)

An innovation in bat box technology

The nine boxes under the eastbound stretch of the Ina Road bridge are nestled into thick concrete with an open bottom side, where narrow slits between panels allow crevicelike access for the bats.

Wolf said pregnant bats typically huddle up close to each other to provide warmth for their young, and male bats separate so they can slow their metabolisms in lower temperatures.

Janine Spencer, an environmental projects manager for Marana and a driving force behind the bat box collaborative, said that outside-hanging boxes are acceptable habitats in most cases, but the weather in Arizona is sometimes too extreme for the bats.

“(Retrofitted boxes) don’t work well here,” she said. “It’s just too hot in the summer and too cold in the winter.”

The Houghton Road bridge in Tucson, which also is undergoing construction, has outside-hanging bat boxes. Engineers are working to ensure the boxes, which are not enclosed in concrete, mimic a creviced environment as closely as possible, said Michael Dawson, a senior environmental planner who is working to make improved bat habitats in Tucson’s new bridges.

Dawson said the Arizona Department of Transportation has been receptive to integrating bat homes in bridges because of the bats’ usefulness and low cost, and that he foresees similar innovation with bat homes as more bridges are improved. 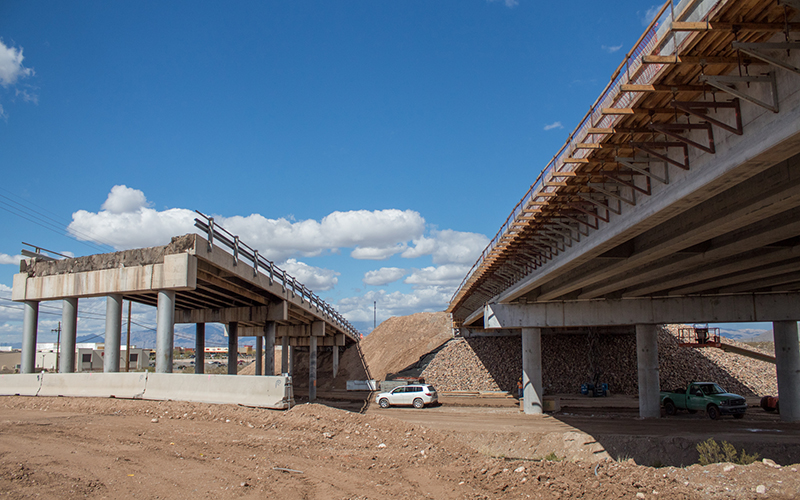 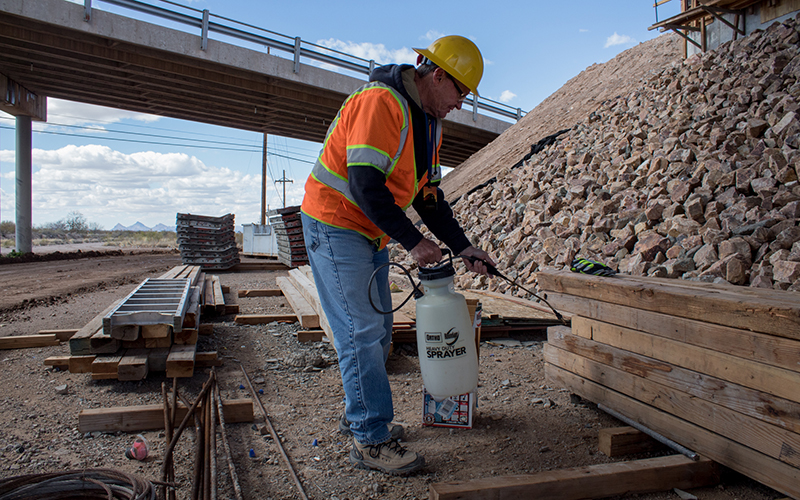 Dawson demonstrates how a mix of bat guano and water will attract migrating bats to the new external bat boxes under the Houghton Road bridge in Tucson. (Photo by Melina Zuniga/Cronkite News)

How bats serve the ecosystem

“You could see it on radar,” Wolf said. “You can see them with the migrating moth colonies and just intercepting them. I imagine the bats here are foraging over agricultural fields.”

This happens most in the summer, when “tornadoes” of bats quickly annihilate moth colonies, Diamond said.

Not only are they fast, they’re famished.

“Bats do a tremendous amount of work for us with eating insects,” Spencer said, “and they can eat several times their own weight in mosquitoes every single night.”

Without the bat boxes, the entire colony of tens of thousands of animals wouldn’t know where to go, Diamond said.

Fifteen years ago, Diamond said, bats wouldn’t migrate to the area, but now that thousands are familiar with the Ina Road bridge, they need to stay. With the bats’ old roosting habitat gone, Arizona Game and Fish hopes to keep them coming back with the use of liquefied bat guano – bat feces – which is sprayed on the boxes so they can smell their way home.

The new boxes and the tailored bridge design are the result of collaboration among Marana, ADOT, Arizona Game and Fish, RD Wildlife Management and several bat experts.

This combined effort has been a rarity, Diamond said.

“We’re hoping this is the new standard for replacing bat habitat in bridges, given that we have a lot of decaying infrastructure,” Diamond said. “While likely finding to replace that infrastructure, we hope to have similar experiences.”

It all originated with Wolf’s suggestion to Spencer that Marana, which will own the bridge upon completion, should look for a way to integrate bat homes into the bridge sooner than later.

“The key is just to get it early in the design process,” she said. 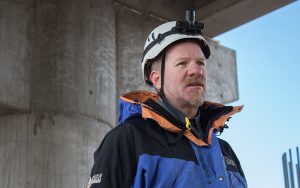 Joel Diamond, a bat ecologist with the Arizona Game and Fish Department, said up to 1,000 bats can fit inside a bat box. The old Ina Road bridge in Marana housed 15,000 to 20,000 bats during the summer migration season. (Photo by Melina Zuniga/Cronkite News)

Diamond said the effort took three years. To get the bats to occupy the boxes, he said Eduardo Moreno, a senior research biologist with Arizona Game and Fish, spent nearly three months manually moving the bats to get them accustomed to the boxes.

“Our work would not be possible in the absence of this box-style bridge and this bat box,” Diamond said. “It was a Herculean process – or maybe Sisyphean.”

Diamond said the current bat count – in the low thousands – looks promising. But the work isn’t over yet.

“Certainly we think we’re very close to replacing that available habitat the old bridge had, but from our perspective as biologists we want as much bat habitat as we can possibly get,” he said. “We put up another hundred boxes, hopefully it’ll become occupied.”