SCOTTSDALE – Parents and their children sat in a classroom at the Scottsdale Gun Club, just past rows of rifles, ammo and novelty T-shirts, including one with a picture of a T-rex and the caption “Small Arms Dealer.”

Elementary school-age children fidgeted in their seats, next to mothers and fathers, listening to the instructor.

In a country where studies show an average of 19 children are killed or injured by a gun every day, these firearm-owning parents are intent on keeping family members safe.

On this recent Saturday, instructor Ryan Arnold provided tips and advice on how to introduce their children to shooting when they’re ready.

“A large percentage of the American family, American homes, do have firearms in them,” Arnold said. “Respecting the firearm, treating it safely, just like you do anything else in your house that could potentially be dangerous, that’s very important.”

Firearm deaths of Arizona children increased by 29 percent from 2015 to 2016, and 100 percent of those deaths are preventable, according to the Arizona Department of Health Services.

Part of prevention is taking children to a professional to learn to shoot, Arnold said, no matter the parents’ experience level. 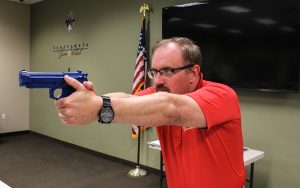 Still, Harutiunian said, the age limit for owning a gun should be raised to 21 from 18, and gun buyers should undergo more thorough background checks.

He also wants his children to stay away from the guns he keeps in the house.

“I want him to learn more about safety so he doesn’t touch my guns,” Harutiunian said of his son. “I want him to be calm, collected and be able to tell me, ‘Hey Dad, your gun’s laying in the middle of the coffee table’ or something.

“I want him to know what to do, and I think as much as I’m teaching him, I want him to learn more from the instructors because they know more than I do.”