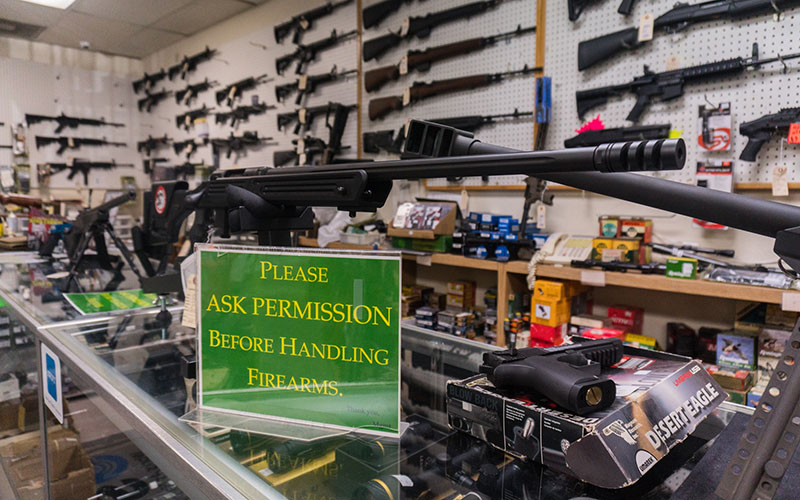 People ages 18 to 21 make up only about 2 percent of the customer base of Legendary Guns in Phoenix, owner David LaRue said. (Photo by Daria Kadovik/Cronkite News)

PHOENIX – David LaRue, owner of Legendary Guns Inc., wondered Friday how his central Phoenix store might be affected by the recent decision by several major retailers to end the sale of firearms and ammunition to anyone younger than 21.

David LaRue, owner of Legendary Guns Inc. in central Phoenix, said he understands the decision of multiple retailers to ban sale of guns and ammunition to customers younger than 21, but he doesn’t necessarily agree with it. (Photo by Daria Kadovik/Cronkite News)

“I don’t know if it’s the right thing to do, but I can understand why they did it,” LaRue said, referring to this week’s announcements by Dick’s Sporting Goods, Walmart and Kroger Co. “And if the government changed the law to 21, I don’t think that’d be a terrible thing.

“Conceivably, I’m even thinking about it myself, but I don’t know which way I’m going to go on it.”

Since the announcements, people have lit up social media for and against the moves. Some suggested the bans would drive up sales at locally owned stores, such as Legendary Guns.

LaRue, however, is skeptical he’ll see a boost in business.

He said 18- to 21-year-olds make up a small portion of sales – about 2 percent of his customer base at most. His employees will decline sales if they find the behavior of a customer suspicious or worrisome.

“I would hope if somebody like (Parkland, Florida, shooting suspect Nikolas Cruz) came in, we would spot him and we would decline the sale,” LaRue said. “We’ve done that in the past if somebody doesn’t look right, if somebody strange is coming up with the money to buy an expensive gun that you feel warning signs about, you discontinue the sale.” 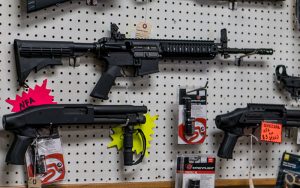 David LaRue, owner of Legendary Guns in Phoenix, said he is legally entitled to decline a gun sale if he’s suspicious of the buyer for any reason. (Photo by Daria Kadovik/Cronkite News)

The Gun Control Act of 1968 prohibited sales of handguns to anyone younger than 21, but it does allow for the sale of long guns. LaRue said handguns account for more than half his sales.

Some Republican lawmakers, including Florida Gov. Rick Scott, have supported legislation to raise the minimum age for purchasing rifles to 21, according to The Washington Post.

However, LaRue is conflicted over government arbitrarily suspending the rights of someone who is old enough to serve in the military and die for his or her country, but that his rights as a gun shop owner allow him to discontinue a sale for practically any reason.

“The (Bureau of Alcohol, Tobacco, Firearms and Explosives) has told us we can decline any sale without any legal liability,” LaRue said. “Even if a strange voice tells us … hopefully we wouldn’t go that far, but if we feel the least bit (of) caution on a sale, we would rather decline it.” 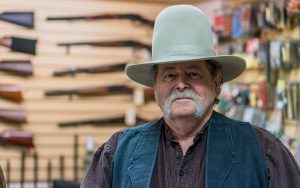 Bob James, owner of James & Guns Inc., a gunsmithing business in Phoenix, sees an opportunity in the decision of major retailers to ban sale of guns and ammunition to customers younger than 21. “More business for us,” he said. (Photo by Daria Kadovik/Cronkite News)

“We don’t get a lot of 18-year-olds in here shopping by themselves anyway,” James said.

Both LaRue and James pointed to what they called failures of law enforcement agencies at every level for many mass shootings. LaRue said local law enforcement and the FBI should have taken action on the tips that had been called in before the shooting at Marjory Stoneman Douglas High that left 17 dead.

“We’re very strict around here. We follow the rules, and they’ve been working,” James said. “So, what’s not working? Law enforcement’s not working.”

When prohibited possessors do try to obtain a gun, LaRue said, the Department of Justice often doesn’t prosecute them.

“I don’t think we need more laws, I think we need to increase the efficiency,” he said. “We have plenty of avenues to stop this. If they don’t work, let’s have more change. But let’s at least see how (current laws) work.”

Following policy changes by Dick’s, Walmart and others, gun-control advocates have called for other retailers to institute similar rules. Advocacy movements like #BoycottNRA prompted Delta Airlines and other businesses to end their membership discounts with the National Rifle Association. Georgia legislators punished the airline this week, cutting a tax benefit that would have saved Delta millions, according to “The Atlanta Journal-Constitution.”

So Dick’s and Walmart are changing the minimum age to buy guns and ammo. Looks like they are doing their part to help the small business gun shops in town.

The NRA does not support raising the age of all firearm sales to 21, according to the “Boston Globe.”

Despite the rhetoric and national gun-control campaigns, LaRue is confident in whatever decision he makes regarding an under-21 ban.