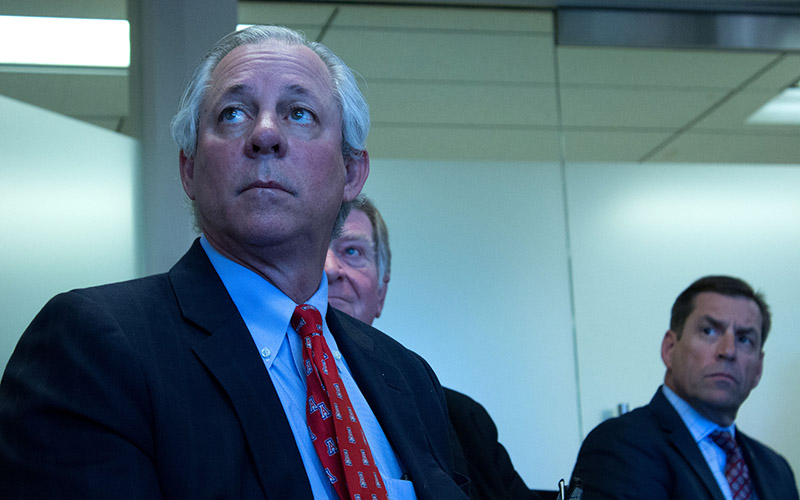 Sean Miller will remain coach of the Arizona men’s basketball team. He said Thursday that reports he discussed payment to a player were false. (Photo courtesy Arizona Athletics)

PHOENIX — The University of Arizona put on a proverbial full-court press Thursday, discrediting allegations made in a report about Sean Miller’s recruitment of a star player and saying it will retain the men’s basketball coach.

Beginning with a statement in Tucson, Miller insisted he “never knowingly violated NCAA rules,” calling an ESPN report that he discussed a $100,000 payment to a player inaccurate and said he will remain the coach of the Wildcats.

“Let me be very very clear: I have never discussed with Christian Dawkins paying (Wildcats freshman) Deandre Ayton to attend the University of Arizona,” he said to gathered media at McKale Center. “In fact, I never even met or spoke to Christian Dawkins until after Deandre publicly announced he was coming to our school. Any reporting to the contrary is inaccurate, false and defamatory.”

“While I have done nothing wrong, I am in charge of the men’s basketball team,” Miller said. “I have never knowingly violated NCAA rules while being head coach of this great program.”

Hours later, University President Robert C. Robbins and athletic director Dave Heeke reinforced Miller’s sentiment, announcing he would remain head coach during a meeting of the Arizona Board of Regents.

Robbins and Heeke concluded their investigation into the report recently, which is one of the reasons Miller did not coach in Arizona’s most recent game at Oregon. During the process, Miller cooperated every step of the way, Robbins said.

“He was eager to speak with us and answered every question we asked,” Robbins said. “At this time we have no reason to believe that coach Miller violated NCAA rules or any laws regarding the allegation reported in the media. Additionally, he has a record of compliance with NCAA rules, and he has been cooperative with this process.”

As part of the university’s investigation, Robbins said he inquired to the FBI about listening to the wiretaps but was denied.

Following Richardson’s arrest in late September, Miller stated that “as the head basketball coach at the University of Arizona, I recognize my responsibility is not only to establish a culture of success on the basketball court and in the classroom, but as important, to promote and reinforce a culture of compliance.”

Five months after those comments, Miller had to defend himself in front of many media members curious about his future at the university. He stated that he had never met or spoken to Dawkins and that he has never and will never pay a player to attend the University of Arizona.

“These statements have damaged me, my family, the university, Deandre Ayton and his wonderful family,” Miller said.

Miller said that he could not stay silent and that he looks forward to winning a regular-season Pac-12 title and he will coach the team tonight when it takes on the Stanford Cardinal in Tucson.