A 36-hour tattoo, other stories from Cactus League body art 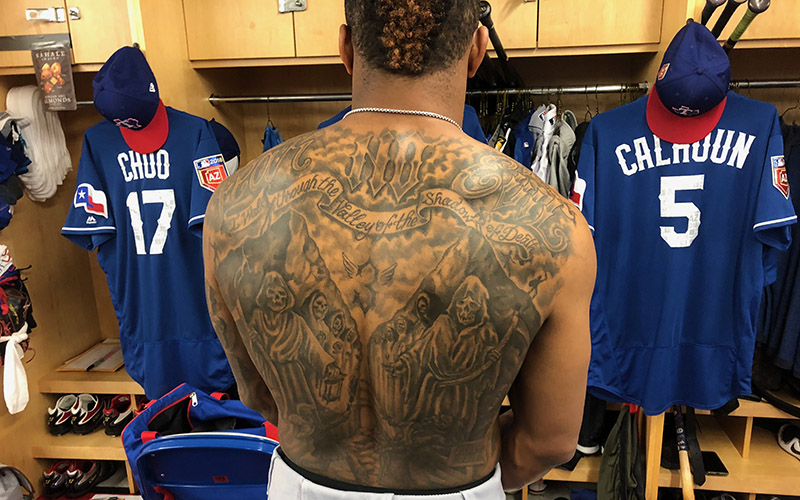 Delino DeShields Jr. shows off his back tattoo in the Texas Rangers clubhouse in Surprise. He said it took 36 hours to complete. (Photo by Will Tyrrell/Cronkite News)

SURPRISE – Thirty-six hours. Thirty-six hours of Rangers outfielder Delino DeShields Jr. lying on his stomach waiting for a tattoo artist to complete the work covering almost every inch of his back.

“I’m a beast. I see the end, and I just want to get it done,” DeShields said.

The words from Psalm 23:4 appear across his back: “Fear no evil; I walk through the shadow of death.”

It is more than just ink on some skin to DeShields. In his eyes, it is a mural.

“It’s something that has been in my life for a long time, ever since I can remember. Something that have been instilled in me through my mom, my grandmother.”

DeShields Jr. is one of many Rangers players who sport tattoos.

Body art is not just popular with professional athletes. According to a 2012 Harris poll, 21 percent of U.S. adults sport that kind of body art. Their reasons range from rebellion (25 percent), feeling more attractive (21 percent) to spirituality (16 percent).

DeShields swears spending a day and a half securing the tattoo wasn’t the original plan.

“I didn’t really think about how big I wanted to go but I wanted to do something about that verse, and every little detail in it means something throughout the whole thing.”

Fellow outfielder Willie Calhoun, a former University of Arizona and Yavapai College player, may not have a single tattoo to the extreme of DeShields but his body is still covered with ink.

Calhoun has sleeves on both of his arms along with tattoos on his legs totaling about 60 hours of work.

The most meaningful piece of art is on the inside of his right arm, a quote his mother told him growing up.

It reads, “God will wreck your plans when he sees that your plans are about to wreck you.”

“It means the most to me because just everything that I have overcame,” Calhoun said. “I live by that quote because some of the things that he wrecked for me, and I overcame that to help me be the guy that I am today.”

When infielder Andy Ibanez defected from Cuba in 2014, he wanted a piece of home to always have with him.

“When I took off from Cuba, I came here to Miami. I was missing home a lot so I took the initiative of getting the tattoo because I miss Cuba a lot.”

To some, tattoos have a bad reputation and are deemed unprofessional.

For many players, they have special meaning.

“I see it as art. When it is on my body for the rest of my life, as long as it means something I am fine with that,” DeShields said.

“Everything I have on my body, it means something. That is the most important thing.”

Calhoun says his tattoos “just mean something to me because it is something that has actually happened in my life.”

DeShields’ tattoo was done by Vin Vega, a famous tattoo artist in Atlanta who DeShields now considers family after all the work Vega has done on his body.

“I feel like I’ve known him for a long time,” DeShields said. “We’ve kind of built this relationship through the tattoos to where we have gotten really close.”

“We have a relationship where if I ever need anything from him, he will stop what he is doing and he will come.”

With almost all of his upper body covered, DeShields plans to get a sleeve on his right leg.

He is keeping what it will look like a secret.

“I want to surprise people, but it is going to be different,” DeShields said. “If there is anything anybody will say it is that I like being different.”