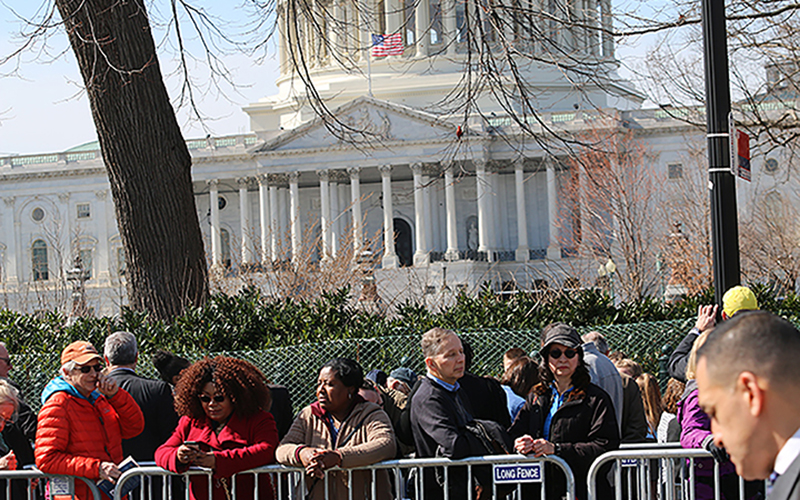 Crowds waited for hours Wednesday for the chance to get into the Capitol to pay their respects to the Rev. Billy Graham, who was lying in honor in the Rotunda. (Photo by Kyley Schultz/Cronkite News) 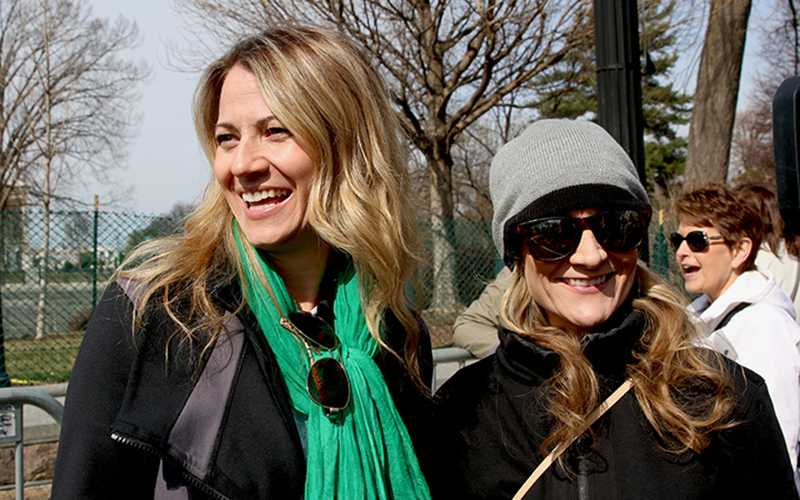 Crystal Van Dyke, left, and Jamie Wooldridge came from Phoenix to pay their respects to the Rev. Billy Graham, who was lying in honor in the U.S. Capitol. (Photo by Kyley Schultz/Cronkite News) 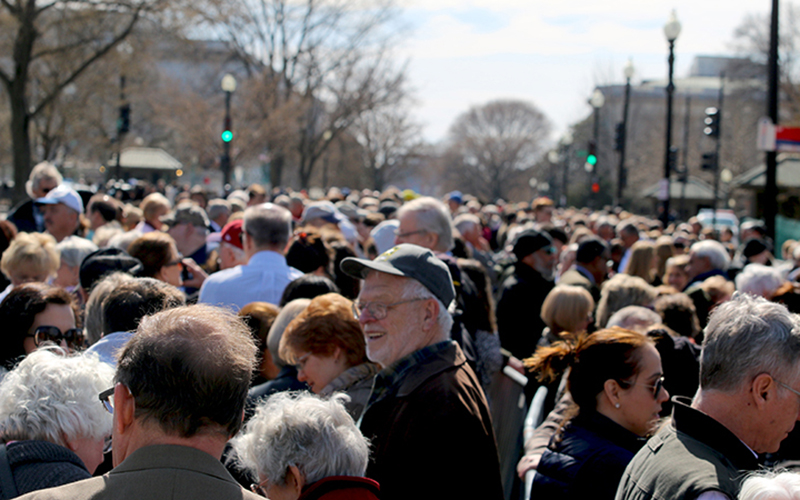 Police closed down First Street near the Capitol to accommodate the crowds of people who showed up to view the casket of the Rev. Billy Graham. (Photo by Kyley Schultz/Cronkite News) 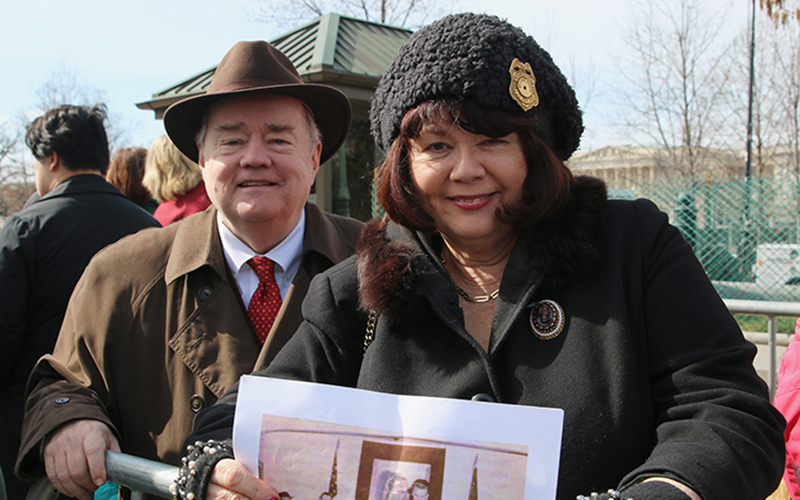 Mark and Cheryl Rhoads with a picture of a young Billy Graham and their grandparents, who they said gave the evangelist his first job as a minister. (Photo by Kyley Schultz/Cronkite News)

WASHINGTON – Arizona residents Crystal Van Dyke and Jamie Wooldridge were among the first in line Wednesday morning to pay respects to the Rev. Billy Graham as the renowned evangelist was lying in honor in the Capitol Rotunda.

Graham, known as “America’s Pastor,” died Feb. 21 at 99 after nearly half a century of advising presidents and preaching to millions across the globe. He is the only religious leader to lie in honor at the Capitol and one of only a handful of civilians, the last being Rosa Parks in 2005.

“For us, to celebrate his legacy was just something we felt compelled to do,” said Wooldridge, who flew from Phoenix with Van Dyke for Graham.

The two got in line at 9:30 a.m. so they could be among the first to go inside when doors opened to the public at 1 p.m. Viewings were scheduled to continue until 8 p.m. Wednesday before resuming on Thursday.

For Van Dyke and Wooldridge, whose husbands are pastors at Phoenix’s Christ Church of the Valley, Graham exemplified many of their church’s core values: strong leadership and service to others.

“Today’s climate, you hear all these scandals going on and we just thought, you know, this was somebody who lived out his faith, who was about saving souls, sharing the good news and I just thought that’s a rare opportunity to come out and pay your respects,” Van Dyke said.

“This is just a small gesture on our part of honoring others, but he reminded us to always look for the good in other people,” she said.

While hundreds of well-wishers with Bibles and U.S. flags waited outside the Capitol, Graham’s family was inside receiving lawmakers for a ceremony that began in the Rotunda at 11 a.m.

At that ceremony, President Donald Trump called Graham an “ambassador of Christ,” praising the evangelist’s dedication to “more than 200 million people” across the world who he preached to during his career.

“We can only imagine the number of lives touched by the preaching and the prayers of Billy Graham – the hearts he changed, the sorrows he eased, and the joy he brought to so many. The testimony is endless,” the president said, according to a White House transcript of his remarks.

Trump called it fitting that Graham be honored “right here in the Rotunda of the United States Capitol, where the memory of the American people is enshrined.”

As she stood outside waiting to get in, Cheryl Rhoads said it was rare to honor someone who was not an elected official in the Rotunda, but that Graham’s message was a “universal one that is now timeless.”

“Billy Graham certainly on a world stage had just as much of an impact as any elected official,” her husband, Mark Rhoads, said.

The Rhoadses were part of the crowd that was packed between barricades on First Street as they waited to pay their respects to Graham.

Cheryl said their grandparents, Burton and Amanda Rhoads, were the deacons who gave Graham his first job as a pastor at Western Springs Baptist Church in Illinois. She said she was first moved by Graham when he appeared David Frost’s show, and was amazed to learn that her family had known the reverend so well.

“He would have dinner at our grandparents place on Sundays, other people in the family knew him pretty well,” she said, displaying a picture of Graham and her grandparents at the pulpit of the Illinois church.

Graham wrote more than 30 books and evangelized around the world with is radio and television “crusades.”

“People can read his books, watch his sermons on YouTube and hear his message now thanks to technology,” Mark Rhoads said.

Graham’s body is scheduled to lie in honor in the Rotunda for another day before being taken back to his home state of North Carolina for a planned Friday funeral.

Wooldridge said she was glad they were able pay their respects in person.

“Billy Graham always lived a life for others, and I think what we can learn from him in the future is that is the way we should all live our lives,” she said. “Always look for the good in other people and serve them well.”