“I guess, to get to the heart of the issue, is this administration is creating havoc in the (immigrant) community,” immigration attorney Alma Montes de Oca said. (Photo by Leah Goldberg/Cronkite News)

PHOENIX – The U.S. Supreme Court declined on Monday to hear the Trump administration’s plea to bypass federal courts and get the high court to interject itself in the legal process of ending the DACA program.

The legal ramifications of this decision will more than likely push the DACA deadline, set for next week, even further out, but DACA recipients and advocates in the Valley aren’t releasing sigh of relief just yet.

Karina Ruiz, president of the Arizona Dream Act Coalition and a recipient of protections under the Deferred Action for Childhood Arrivals, says she’s nervous even though her legal status does not expire until January 2019.

“Time doesn’t stop, and sooner or later, that deadline is going to be here and we need a permanent solution,” Ruiz said. 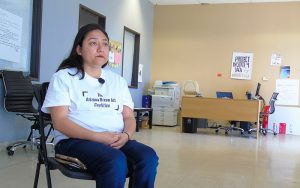 With uncertainty still surrounding the DACA program, Karina Ruiz says recipients should take time to care for themselves but “then move on so that we can keep the fight and keep growing the movement.” (Photo by Leah Goldberg/Cronkite News)

Alma Montes de Oca, a Phoenix immigration attorney, said the Supreme Court’s decision now puts the case back in the hands of the U.S. Court of Appeals for the 9th Circuit.

“The decision today is one of procedure, where the (Supreme Court) says you have to allow the system to work its way through a lower district court, to a court of appeals and then on to the Supreme Court,” Montes de Oca said. “Then the Supreme Court gets to decide whether they are going to take up the case or not.”

Meanwhile, DACA recipients can continue to renew their status as they’ve been doing since the lower courts filed their rulings. But despite Monday’s decision, the path to a permanent DACA solution is still an uncertain one.

“What we can expect, in short, is more uncertainty for DACA recipients,” Montes de Oca said.

Vianey Cruz, 30, works as a contractor at the Palo Verde Nuclear Plant and is a reserve firefighter and Emergency Medical Technician for the town of Congress. She came to the United States as a baby and has been a DACA recipient since 2013.

Being a DACA recipient “is strange because growing up, you don’t realize what it means to not have been born in the United States of America” until you grow up and try to apply for college and get a job.

Cruz said she was an honors student, well-liked by her peers and active in sports.

“I grew up thinking I was like all the other kids,” she said.

Like many DACA recipients, Cruz said the Supreme Court’s action makes her numb because of how long the fate of the program has been in limbo. She would like for lawmakers to once and for all agree on the future of DACA and to “just put us out of our misery.”

Despite the disappointments and challenges they have faced, Cruz said she doesn’t plan to give up the fight anytime soon.

Montes de Oca said she has seen the turmoil caused by the decision to end DACA, which President Trump announced in September. He gave Congress until March 5 to come up with a long-term solution, but no progress has been made.

“I guess, to get to the heart of the issue, is this administration is creating havoc in the community,” she said. “Because if there was an interest to maintain stability and protect immigrant lives and DACA recipients – they would have created a smooth transition when it came to the DACA decision.”

“Initially, when he announced (the decision to rescind DACA), he said ‘I will accept any proposal that comes my way,” she said. “We have seen that any proposal is not correct. He repeatedly declined to consider multiple proposals before the March 5 deadline.”

According to the Immigration Legal Resource Center, since the Department of Homeland Security rescinded the DACA program on September 5, several filed lawsuits claim the process was unlawful because “it violates both the procedural and substantive requirements set forth by the Administrative Procedure Act,” “the due process clause of the Fifth Amendment,” and “the equal protection clause of the Fifth Amendment.”

The Trump administration has experienced two roadblocks this year in moving forward with ending the program. First, a federal judge in California ordered the U.S. government to accept renewal applications for DACA recipients, and a few weeks ago, another federal district court in New York reached the same conclusion.

During a nationwide conference call Monday with representatives from various advocacy groups and litigators, Marielena Hincapié, executive director of the National Immigration Law center, said this was a win for DACA recipients.

“By denying the Department of Justice’s request to hear the California case, the Supreme Court has rightly allowed our clients, along with several others who brought legal challenges of the determination in DACA, to have their day in court,” Hincapié said.

Ruiz said she feels drained and stressed from the ongoing uncertainty, especially as an advocate, and yet, she continues.

“We know that the reason why we do this, it is our lives,” Ruiz said. “We cannot afford to quit or to back down, so we just have to keep fighting.”

Additional reporting for this story provided by Kyley Schultz.