The Trump administration wants to enforce a requirement that able-bodied, childless recipients on the Supplemental Nutrition Assistance Program, or food stamps, have to work or be in a work program to get more than three months of SNAP benefits. (Photo courtesy U.S. Department of Agriculture)

WASHINGTON – The Agriculture Department wants to make it harder for states to get around the rule that limits childless, able-bodied adults to three months of food stamp benefits unless they get a job.

The USDA said Thursday that it plans to allow states to waive the work requirement only in counties with an annual jobless rate of 10 percent or more. In Arizona, where 12 counties are currently eligible for waivers, only residents of Yuma and Apache counties could get extended benefits without getting a job under the plan.

The change, to be officially posted in Friday’s Federal Register, is meant to “promote work and self-sufficiency” for those in the Supplemental Nutrition Assistance Program (SNAP), officials said on a conference call with reporters Thursday.

“Long-term dependency has never been part of the American dream,” said Agriculture Secretary Sonny Perdue in a prepared statement.

“USDA’s goal is to move individuals and families from SNAP back to the workforce as the best long-term solution to poverty. Everyone who receives SNAP deserves an opportunity to become self-sufficient and build a productive, independent life,” the statement said.

Requests for comment from Gov. Doug Ducey’s office were not immediately returned and an official with the Arizona Department of Economic Security, which oversees SNAP in the state, said the agency will not comment on pending regulations.

But one advocate said the plan was taking the wrong path toward the right goal.

“We’re definitely supportive of individuals working as a pathway out of poverty,” said Angie Rodgers, president and CEO of the Association of Arizona Food Banks. “But they shouldn’t be taking away food as an incentive to get a job.”

Rodgers said that in Arizona able-bodied people who struggle to get jobs could be facing personal problems or might even be mislabeled as able-bodied. She said that in states where unemployment has gone down there is not going to be “a sudden influx of employers.”

But Michael Tanner, senior fellow at the Cato Institute, said that childless able-bodied people on the program should be required to at least look for work after a certain period of time. He said the program “is increasingly becoming something that people take for granted.” 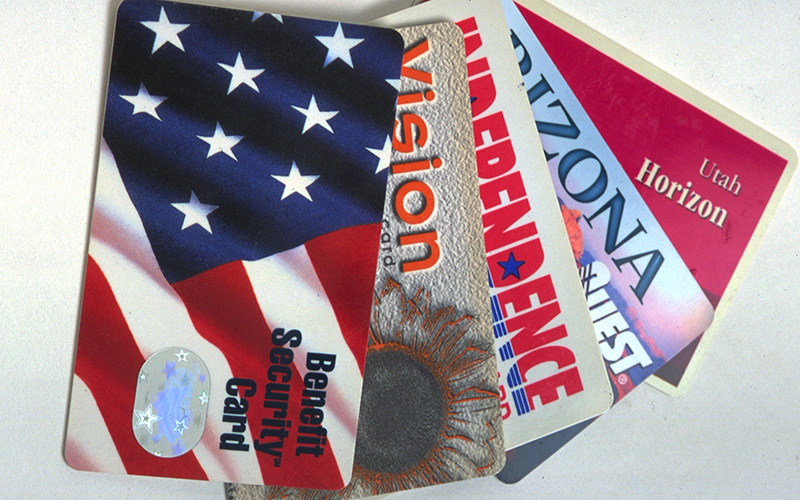 “Food stamps” are now allotted through electronic benefit transfer (EBT) cards that recipients of the Supplemental NutritionAssistance Program use when buying food. (Photo by Ken Hammond/USDA)

“This is actually fairly narrowly tailored to able-bodied adults who can work. And to the degree that they can, they should, or be in job-training or be in job-search,” Tanner said. “There’s a variety of ways to meet this requirement.”

The proposal comes just weeks after the administration gave 10 states, including Arizona, the go-ahead to propose pilot projects that would require work or community engagement from able-bodied Medicaid recipients.

Under current federal rules for SNAP, able-bodied adults without dependents can only get three months of benefits in a three-year period, after which they have to start working. But states are allowed to request waivers of that work requirement, a request that the USDA said is being overused.

The department’s proposal to limit waivers to counties with unemployment rates above 10 percent was included in President Donald Trump’s fiscal 2019 budget released this month. USDA officials said the tightened rules are the first step of a longer process of reforming benefits.

In Arizona, the three-month limit on food stamps applies to any able-bodied, childless recipient between ages 18 and 49 – unless they work 80 hours a month or put in 80 hours in a job search or training program. But the state currently exempts most Indian reservations, Apache Junction and every county but Maricopa, Pima or Yavapai from the limit.

Yuma and Apache counties would be the only counties that met the new waiver level, with annual 2016 unemployment rates of 18.6 percent and 11.3 percent, respectively, according to the Bureau of Labor Statistics. Santa Cruz County was just under the proposed new limit with 9.9 percent jobless rate for 2016.

Annual numbers for 2017 were not available, but BLS showed Yuma and Apache counties still above the cut-off in December, at 15.7 percent and 10.3 percent unemployment for the month.

In Arizona last year, 12.4 percent of households received SNAP benefits, according to the USDA.

Rodgers said it is “reasonable” for governor’s to have discretion on waivers in their states, and she cautioned federal officials about limiting that discretion.

Tanner said he understands that there will be times when unemployed able-bodied people need food stamps. However, he said limiting their time on the program is necessary.

“The program has always allowed people to stay temporarily without working because it’s understood, people lose their jobs and they need help in the short term and this is a way to boost them up,” Tanner said. “But people shouldn’t necessarily be on this program for four, five, six years without working.”

Rodgers said that three months is not enough time for low-income individuals receiving SNAP benefits to get back on their feet, and that considerations should be taken on a subjective level. She said that the latest change is being made in haste.

“They should not be speeding up the clock because of this politically charged time,” she said.