Republicans in the Arizona House effectively ended all talk of gun control in the Legislature Tuesday, stopping an attempt to force a vote on a bill to ban bump stocks. (Photo by Jim Tuttle/News21)

PHOENIX – The Arizona Legislature likely won’t debate a single piece of gun control legislation this session, after House Democrats failed Tuesday to force a vote on a bill to ban bump stocks, which were used in the Las Vegas mass shooting.

Rep. Randall Friese and Rep. Daniel Hernandez, both Democrats from Tucson, co-sponsored a measure that would have banned trigger cranks, including bump stocks, that make it possible for a semi-automatic guns to be fired at nearly the rapidity of an automatic weapon. 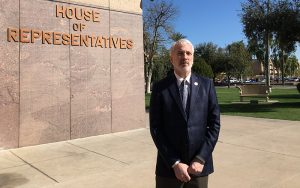 Rep. Randall Friese, D-Tucson, co-sponsored a bill to ban bump stocks in Arizona. Democratic attempts to foce a vote on the bill Tuesday failed, effectively killing any chance the Arizona Legislature would take up gun control this session.

The bill, which never made it to a committee hearing, was stuck alongside about a dozen other proposed gun control bills after Rep. Eddie Farnsworth, R-Gilbert, who chairs the House judiciary and public safety committee, refused to hear them.

Bills that do not get a committee hearing cannot advance in the House without a special procedural motion; such a motion failed Tuesday, 34-25, along party lines.

During Tuesday’s debate, House Democrats cited last week’s deadly school shooting in Parkland, Florida, that killed 17 students and faculty, as they tried to convince persuade Republicans to discuss the issue.

As lawmakers debated, President Donald Trump announced he was asking the Justice Department to take steps to ban bump stocks. Gun rights advocates and the National Rifle Association have pushed lawmakers to resist gun control for decades. The president’s proposal is the first time he has indicated he is willing to apply any restrictions.

Arizona Republicans did not address Trump’s announcement. Instead, they blamed violent video games for gun violence.

“We have so cheapened life in this nation with video games of make believe that tell our children it’s OK to behave that way,” said Rep. Mark Finchem, R-Tucson. “Well, quite frankly, it’s not OK. It’s not OK for a kid to pick up a self-defense weapon and use it against other people.” 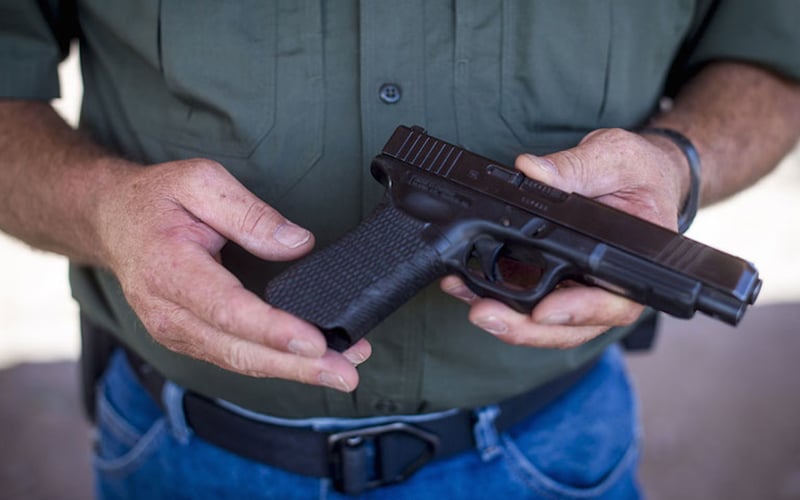 Rep. Jay Lawrence, R-Scottsdale, questioned legislators’ priorities, saying “more babies have been killed by abortion” than died because of guns.

Democrats expressed frustration about the refusal to take even a small step towards gun control.

“The problem is guns,” said House Minority Leader Rebecca Rios, D-Apache Junction. “The problem are members on this floor standing up and saying we shouldn’t take away (a) ‘self-defense weapon.’ An AR-15 is not a weapon of self-defense. An AR-15 is a device used to slaughter.”

On Wednesday, the day after the bump-stock measure failed, Friese told Cronkite News he was frustrated.

“People that live here in Arizona think that we’re doing nothing,” he said. “And we are doing close to nothing, to tell you the truth. But we could be doing so much more if we just allow a discussion on these issues.”