Arizona paid for the voluntary testing for lead in drinking water but schools are responsible for repair costs. Nearly 96 percent of Arizona school had no lead issues. (Photo by Michael M. Santiago/News21)

PHOENIX – Since state officials identified dozens of Arizona public schools with elevated levels of lead contamination in water fixtures, nearly half the schools still are undergoing repairs or tests for levels that could affect students, faculty and staff members.

The Arizona Department of Environmental Quality in December said about 96 percent of the state’s public schools had no problems with lead levels, but it identified 158 schools that needed to repair or replace fixtures because lead levels were higher than government standards, said Trevor Baggiore, director of the department’s water quality division.

Those schools, at a minimum, were urged to run water through faucets or drinking fountains for several minutes to remove lead, he said.

“The exposure is cumulative,” Baggiore said. “If you’re already getting exposed at home through various things, getting exposed through your drinking water at your school would just add on top of that and pose a bigger risk for the students.” 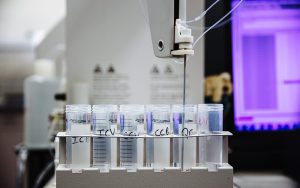 Several complications can arise from lead consumption, such as learning or behavioral problems, especially in children younger than 6, when brain development occurs at a rapid pace, said Jessica Rigler, who oversees public health preparedness for the Arizona Department of Health Services. Still, Rigler said, Arizona has not had any water-contamination cases that elevated lead levels in blood.

According to the Environmental Protection Agency’s website, schools that do not supply their own water are not regulated under the Safe Drinking Water Act, which would require water quality testing for drinking water fixtures. For these Arizona schools, both the testing and remediation process was voluntary.

But after several high-profile discoveries of lead in drinking water elsewhere in the country, Baggiore said, ADEQ took precautions and began statewide testing, which all of Arizona’s 1,427 public schools allowed.

The state findings, for the most part, identified one or two locations at the affected schools, such as water fountains or sinks used for drinking water, that needed replacement fixtures, pipes or other parts. Samples then were taken to verify the repairs were effective.

Mesa Public Schools, the largest district in Arizona, is dealing with nearly half of their 80 sites with levels exceeding the federal standard. So far, the district has fixed more than half the fixtures, with many of the remaining schools awaiting confirmation of test results, spokeswoman Helen Hollands said.

All problematic fixtures will be fixed, she said, but some are lower priority because students don’t use them daily.

Laura Felton, an assistant superintendent with the Paradise Valley Unified School District in north Phoenix, said the district replaced older parts in some fixtures, and tests in February confirmed the problems had been resolved.

Rigler said the state environmental and health agencies provided schools and parents with information to better understand risks of lead consumption and ways to protect children from exposure. 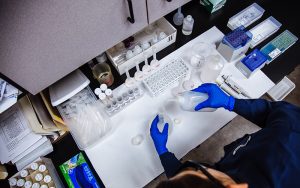 Hollands said the Mesa school district kept parents informed during the repairs. The district’s website includes a tracking spreadsheet of every school’s test results, “whether or not there was any lead found in the drinking water at that school,” she said.

The Arizona School Facilities Board oversees the system for fixes and updates the list regularly. As of Feb. 20, the list shows 71 schools with fixtures that still need to be confirmed as repaired.

Although those schools have gone through one or more of three rounds of testing, reasons for incomplete projects could range from fixtures falling lower on the priority list because not as many people are affected to fixtures requiring a final test after repairs.

“You could tell they were being very intentional about how they processed the tests,” Felton said. “They were doing the most risky ones first.”

Scottsdale Unified School District has 11 schools with fixtures needing repairs that have gone through at least three rounds of tests. As of Feb. 20, no school has been marked fully completed, according to the facilities board’s database.

Cronkite News called the district several times for comment but did not receive a response.

The Flagstaff Unified School District used ADEQ tests but also contracted with a private company to check lead levels in pipes and fixtures. Only one school, W.F. Killip Elementary, had an issue with pipes, said Robert Kuhn, assistant superintendent for operations.

“We went ahead and jumped on it,” Kuhn said. “We checked it out independently and had (the fixtures) double-tested.”

The state paid for the tests but schools were responsible for repair costs. Schools can apply for grants to help pay for system repairs or replacements, according to the School Facilities Board website.