“I want to write music that makes people feel good, but I also want to write music and lyrics that really matter and that are political and that we can speak for this underserved community,” said Tatiana Crespo, a solo performer and member of Las Chollas Peligrosas. (Photo by Lerman Montoya/Cronkite News) 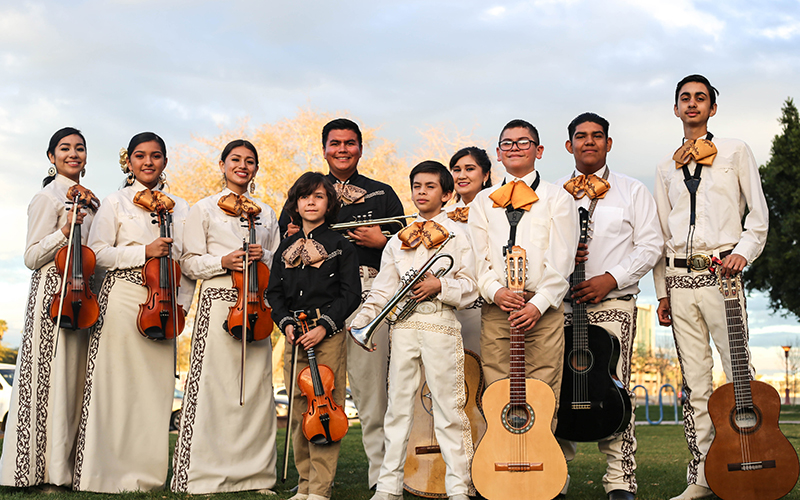 Mariachi Juvenil de Mi Tierra pose for a portrait outside the Phoenix Center for the Arts. “We are trying to showcase our cultural music and save the Spanish language in our students,” said Blondy Clara, co-founder of the group. (Photo by Lerman Montoya/Cronkite News) 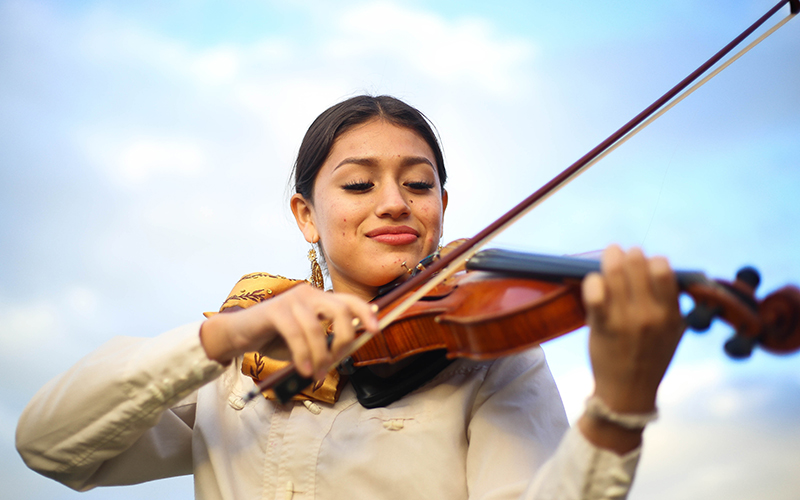 “It’s important to transmit the emotion you’re trying to show with the song,” said Genesis Clara, 15, a violinist in the Mariachi Juvenil de Mi Tierra. (Photo by Lerman Montoya/Cronkite News)

With their desire to give Arizonans a taste of Latin American folkloric music, along with their idea to use their art form as a way to express their post-election feelings, Bunnell and Medina called upon four other local female performers. Talented in various instruments and genres of Latin American music, they formed Las Chollas Peligrosas, Spanish for The Dangerous Chollas, referring to the spiny, treelike cactus native to Northern Mexico and Southwestern United States.

They decided on the name to express their desire for social justice and their underlying political message, which can come across as prickly and unfiltered to audiences.

“We knew we wanted to be activists with our music, we knew that we wanted to spotlight social justice causes, and be involved in our community,” Bunnell said after a performance last week at Valley Bar downtown. “We knew that we were going to talk about things that were maybe a little bit in your face.”

During his presidential campaign, Trump referred to those of Mexican descent saying, “When Mexico sends its people, they’re not sending their best … they’re sending people that have lots of problems and they’re bringing those problems with us (sic). They’re bringing drugs, they’re bringing crime, they’re rapists, and some, I assume, are good people.”

Las Chollas Peligrosas aren’t the only local group expressing their views through their music.

The young members of Mariachi Juvenil de Mi Tierra are also determined to prove those statements wrong with their music and passion.

“When I sing in Spanish in public, I am showing everybody that this is the beauty of Mexico, this is the beauty of my roots, my culture, it’s something that is supposed to be shared with the world,” said Maxx Valdespino, a member of the band. “It’s up to us as mariachis and Latinos and Mexicans, especially after what Trump has been saying about Mexicans. It’s up to us to show the positive side, and not everybody is a rapist, a criminal or bad.”

“The majority of people who attend our events notice our culture and appreciate it,” Blondy Clara, one of the founders of Mariachi Juvenil de Mi Tierra, said in Spanish. “In reality, our audiences have not made any bad comments about our culture and performances; most of the negative comments and doubts come from our own government saying that we, Latinos, are not good people.”

The intersection between music and politics goes back many years, with one example being the rise of folk and soul music during the 1960s American civil rights movement.

American singers, such as Joan Baez and Nina Simone, spoke adamantly about the need for political change in the U.S. with such songs as Simone’s “Mississippi Goddam” and the gospel song “We Shall Overcome,” which Baez sang during the March on Washington in 1963.

After the 2016 presidential elections, Las Chollas Peligrosas and other groups consciously began interweaving their political messages into their lyrics and their interactions with the audience between songs. To many, the election outcome fueled their art and music.

With issues in the Southwest focused on such things as immigration policy, transborder relations, and the Latinx community, artists and performers have come to Arizona, drawing inspiration from its political issues and advocacy work. Latinx is a gender neutral term often used instead of Latino or Latina and is mostly used by those who who seek to advocate for individuals living on the borderlines of gender identity
Tatiana Crespo, a solo performer and member of Las Chollas Peligrosas, is one of those artists who is using her music to advocate for the Latinx community.

Crespo was born in Costa Rica but when she was 11, she and her mother settled in Traverse City, Michigan, where less than 2 percent of the population is Hispanic or Latino, according to the most recent U.S. Census information.

Passionate about the Latin American art and mariachi music she had been exposed to while growing up, Crespo moved to Arizona to finish her studies in performance and be closer to something she was missing: her culture.

“My mom and I were the most ethnic or Hispanic people for miles and miles in this tiny town,” Crespo said. “That’s why I came to the desert, to Arizona, to connect with the Hispanic community in the U.S. and to be closer to the politics of being Latina.”

Drawing inspiration from some of Latin America’s most politically charged lyricists – Calle 13, Ana Tijoux, and Violeta Parra, to name a few – Crespo said she wanted her music to illustrate the Latino in the U.S. experience. Part of that was writing and singing songs in both English and Spanish that connected with her Spanish-speaking audience in the Southwest.

“I had to write this manifesto in one of my classes and one of my biggest points was to make sure that my songs were bilingual,” Crespo said. “Now that I’m in the desert and full of (the) Latin community, I’ve been way more inspired to write a lot more music in Spanish and English.”

Crespo was originally going to pursue a degree in social work, but wanting to advocate for issues she was passionate about and be involved in the Latinx community was something that became second nature to her.

She ultimately found a balance between her artistry and activism. 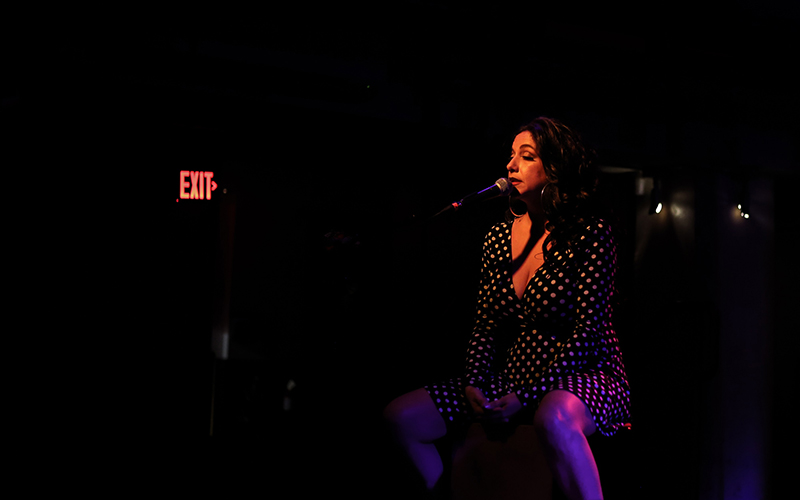 Andria Bunnell, co-founder of Las Chollas Peligrosas, comes from a family of musicians. She has fond memories of her grandfather playing mariachi guitar and singing classic Mexican folk songs to her throughout her childhood. (Photo by Lerman Montoya/Cronkite News)

“I realized I also can’t escape music and being an artist,” Crespo said. “I wanted to help people through my music, and so I’ve always wanted to sing political songs in English and Spanish.”

Most of her songs are in Spanish, however pauses in between each one is used for explaining the meaning to non-Spanish speakers.

Las Chollas Peligrosas ended their Valentine’s Day show covering the song “Los Mandados,” by Vicente Fernandez, known as the King of Mexican Ranchera music. The song tells the story of a persistent Mexican immigrant crossing into the U.S. through various ports of entry and the violence he faces from Border Patrol agents before being quicky deported back to Mexico.

“I literally picked ‘Los Mandados’ because I wanted to talk about immigration issues, and I wanted to spotlight how important it is,” Bunnell said. “We’re remiss if we don’t … this is what we’re supposed to be doing.”

In the song “Yo Sere,” Hanneken sings about the the struggles that undocumented people face when navigating the healthcare system in the United States after a friend of hers produced a documentary on the subject.

“We’ve had a lot of people that have come up to us from the Latin community that have been very, very touched,” Bunnell said. “Literally crying, which is really really heartwarming and amazing.”