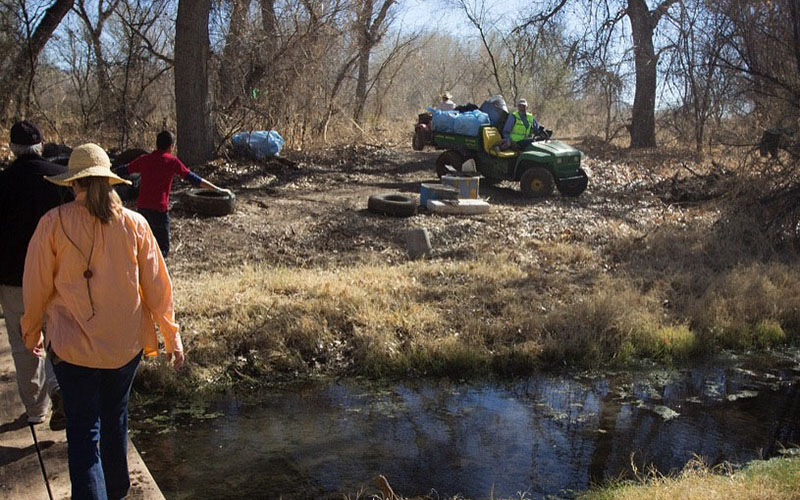 The beleaguered Santa Cruz River slowly is recovering, in part because of volunteer efforts to clean it up. (Photo by Angel Mendoza/Cronkite News) 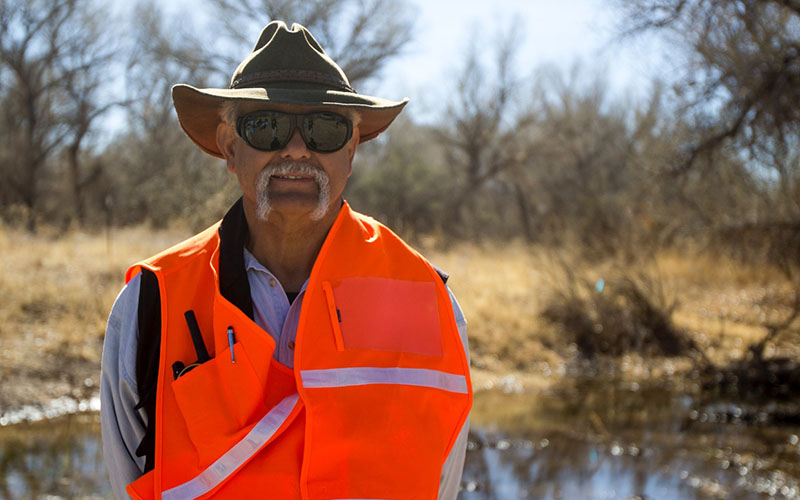 Hydrologist Ben Lomeli is on the board of directors of Friends of the Santa Cruz River, a group trying to keep the river clean. (Photo by Angel Mendoza/Cronkite News)

TUMACACORI-CARMEN – After a 70-year absence, the endangered Gila topminnow has re-emerged in the Santa Cruz River, a sign of health of a historically desiccated river basin.

The cleaner water today can be attributed to upgrades in local water-treatment plants, according to ecologists and environmentalists in Tucson, who say they’re confident that improved treated wastewater has allowed fish populations to thrive.

But, they warn, this vitality could be short-lived.

Last July, a binational sewage transport pipeline shared with Mexico ruptured because of flooding in the Nogales Wash, allowing raw sewage to seep into a creek that feeds the Santa Cruz River. As another summer-flood season approaches, the risk of contamination still threatens the river basin.

The pipeline, called the International Outfall Interceptor, or the IOI, was repaired in October. But some environmentalists see the $1.65 million project as a temporary solution. The 8.5-mile, 45-year-old pipeline, which is above ground in some places in the wash and covered in sediment in others, is cracked and deteriorated.

“That’s the only source of potable water here,” said Ben Lomeli, a hydrologist on the board of directors of Friends of the Santa Cruz River. “You have to be concerned about wells along the river and people that depend on those wells for their potable water supply. They could become contaminated as well.”

His group and other environmental organizations are trying to find solutions to the flooding and sewage-pipe hazards before the summer storms.

So long as the IOI remains in the Nogales Wash, Lomeli said, the threat of ruptures remains a risk increased by climate change and urbanization.

It’s time for a lasting solution, he said.

Treating wastewater, or effluent, for human consumption embodies the phrase “Toilet to tap.” 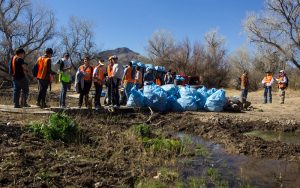 High-school students from Nogales take part in a river cleanup Jan. 28 led by Friends of the Santa Cruz River in Tumacacori-Carmen. (Photo by Angel Mendoza/Cronkite News)

But water treatment plants in Pima and Santa Cruz counties are using effluent in a different way – to improve the health of the Santa Cruz River. The re-emergence of topminnows and other fish is an indication of improved river quality.

Experts say effluent bolsters the amount of natural water in the Santa Cruz River, which makes the river more habitable for fish.

Still, they say, there are still hurdles to overcome. The Santa Cruz has nearly run dry for decades because groundwater in the basin is pumped out to supply Santa Cruz County residents.

“It’s a hundred percent of not just our water needs … it’s part of the very survival of our community in terms of being able to drink water and water our plants and stuff,” said Connie Williams, a team leader for River Watch, a water-monitoring program for the Santa Cruz. “But it’s also a big part of our economic health as well.”

The U.S. Department of the Interior’s Bureau of Reclamation is in the middle of a three-year study of the river’s health. According to its analysis, groundwater pumping in the river basin has been “greatly exceeding replenishment” for decades.

The introduction of high-quality effluent into the river has alleviated that problem to an extent, environmentalists say.

“Having effluent in the river is creating a lot of benefits,” said Claire Zugmeyer, an ecologist at the Tucson nonprofit Sonoran Institute. “We are getting natural recharge of our aquifer. … If it weren’t for effluent, most of the river would be dry for most of the year.”

Finding any fish is a good sign of the river’s health, Zugmeyer said, and the topminnow’s re-emergence underscores the importance of treated wastewater.

Doug Duncan, a fish biologist with the U.S. Fish and Wildlife Service, said more than 1,000 fish can be found in the river today, but things were vastly different before the treatment plant upgrades.

“In some of our past surveys there, we’d survey it at three or four different locations and we would find two fish – and that’s not species, that’s individuals,” Duncan said.

Duncan said the first fish to re-emerge in the Santa Cruz were non-native fish likely dumped in the river by people. He predicts more species may find their way into the increasingly habitable river on their own.

“We were kind of surprised that it would be the topminnow at first because in the Nogales reach of the river, there’s also a fish called the longfin dace and it’s known as a colonizer – or the first thing that shows up anywhere when flow returns.” 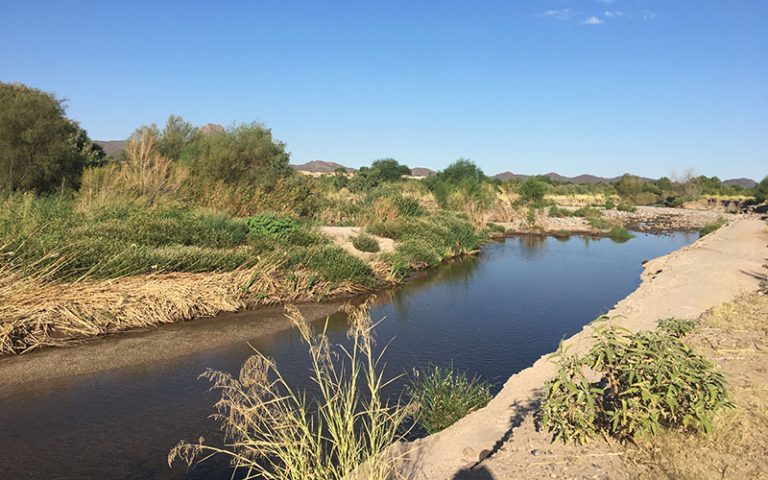 Now that the waters are more welcoming, Duncan said, additional fish species can be manually introduced into the Santa Cruz.

“We still have some regulatory issues to work out with having an endangered species there,” Duncan said. “Pima County is mostly pretty much protected because they have their Sonoran Desert Conservation Plan, which gave them an endangered-species permit.”

Peter Reinthal, a curator and director of the University of Arizona Museum of Natural History, said the limited amount of effluent in Arizona is important to note.

“If you have these species in the effluent and there’s competing interest for the effluent, such as people wanting to use it for agriculture or for watering golf courses or if they can go ‘Toilet to tap’ type of things, how is that going to impact the fish population? … How do you prioritize it?”

In July, Gov. Doug Ducey declared a state of emergency after authorities noticed a breach in the IOI.

The IOI, which was built in 1971, carries millions of gallons of wastewater from Nogales, Sonora, to Nogales, Arizona. Shortly after the rupture, Santa Cruz County Health Services advised county residents to stay away from the river, citing “health concerns,” according to a release from the Arizona Emergency Information Network.

Three days after the breach, the Arizona Department of Environmental Quality found excessive levels of deadly E. coli bacteria in the river.

Facing relentless flow, a manhole on the pipeline became dislodged, said Lori Kuczmanski, a spokeswoman for the U.S. International Boundary and Water Commission.

Had a tree trunk or rock or bigger object hit the exposed pipeline, “more damage could have been done to the IOI,” she said.

In October, an engineering company finished emergency repairs on the pipeline, a fix that cost an estimated $1.65 million, according to the commission.

The pipe was repaired to proper engineering standards, she added, but the full scope of damage done to the river from the sewage was unclear.

“Nobody really knows the extent of what was dumped into the river or the particular impacts on the fish themselves,” Reinthal said. However, he said direct contact with the sewage “could actually kill the fish.”

Besides the potential harm to river life, Friends of the Santa Cruz River worry that a more severe rupture in the future could affect the drinking water of the river-dependent county.

“There are residential wells alongside the river … if it’s a shallow well, there’s a potential for infiltration of some of the nastier components of the untreated wastewater to filter down and potentially get into the residential well,” said Scott Vandervoet, a Friends of the Santa Cruz River board member.

Zugmeyer, with the Sonoran Institute, said the July rupture has put environmentalists and community members on alert.

“A breach of this pipeline could put at risk all of the progress we’ve made in terms of improving the health of the river and community health,” Zugmeyer said. “Santa Cruz County … they’re very groundwater dependent, and so it could impact the health quality of the water the community is using.”

Permanent solution to a ‘Band-Aid’ fix

“The Sonoran Institute definitely feels like the only way we’re going to tackle this issue is to have a larger, collaborative effort where everybody is involved,” Zugmeyer said.

Lomeli is seeking collaboration with the University of Arizona and Nogales to find permanent solution to what he called a temporary fix.

Responsibility for water quality has been muddled among environmental agencies. After the October repairs, the U.S. International Boundary and Water Commission said that although the IOI is owned by Nogales, “due to a lack of action by the City and State of Arizona, the USIBWC took action.”

“It’s frustrating that we can’t get our agencies – federal, state and local – to work together because this is a poor community,” Lomeli said.

As another summer flood season approaches, he said the county can’t quickly handle the issue on its own.

“Our community here – Santa Cruz County, the city of Nogales – does not have the resources to deal with this problem as it needs to be dealt with, and so it’s going to be a solution that requires all of these entities, political and jurisdictional entities, to work together … it’s going to be tough for any one entity to do it all by themselves.”