TUCSON – Jason Ground has two main reasons to enjoy the stretch of the “new” Santa Cruz River that runs through Tucson.

As a communications specialist with Pima County, he’s been involved with the project to make the river healthier and stronger in the last few years, but on a more personal level as a Tucson native, he said it’s been great for him to see it become a place the community can truly enjoy.

Ground said he sees the river as the main reason Tucson was founded all the way back in 2100 BC.

And now, instead of being notable for its bad smell, the river and the surrounding trails can actually connect the community. 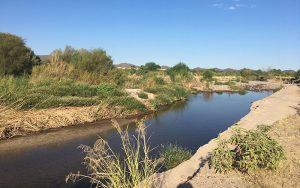 A stretch of The Santa Cruz River in Tucson. The river has shown significant improvement after upgrades to a nearby water treatment facility. (Photo by Angelica Cabral/Cronkite News)

“A lot of these neighborhoods would be really isolated pockets, but the loop provides this sort of artery to the rest of the community,” Ground said.

He said the river represents Tucson in an appropriate way; it’s a place where people, including himself, can take part in recreational activities, thanks to the mentioned new trails, which also serve to help with maintenance upkeep.

“When I was growing up, nobody came out here, there was nothing to see here, you didn’t want to come here,” he said. “Now, literally as we’ve been standing here, there’s been dozens of people coming by on bicycles and joggers and stuff. It’s made it a better place.”

Getting the river to where it is now has been the result of a four-year undertaking lead by Pima County. Cleaning up the water required a serious upgrade to treatment plants, which the county funded through grants provided by the Environmental Protection Agency.

The city now puts highly treated wastewater into the river, instead of the previous, more toxic matter they were dumping in.

None of these improvements, however, have come at a cheap cost. With the addition of the second water treatment plant, officials said the estimated final cost of the project is $660 million.

The trails have even given rise to some interesting hobbies 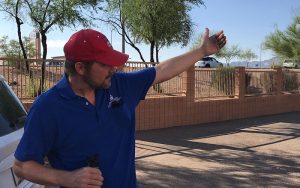 Evan Canfield, a civil engineer with Pima County, is excited about the new developments regarding not just the river, but the trails around it. (Photo by Courtney Mally/Cronkite News)

Susan Carosielli is a Tucson resident who has been coming to the river for years to collect the golf balls that get hit onto the trail from the neighboring golf course. She’s noticed the odors are still present at times, but also that there’s been an increase in the amount of water flowing through.

The Sonoran Institute, an environmentally focused nonprofit group whose mission is to connect communities with natural resources, has been tracking the changes and recently released their fourth and final report regarding the Santa Cruz River.

And although the river has shortened in length, the water itself is now much more clear and healthier. Claire Zugmeyer, an ecologist with the Sonoran Institute, said another bonus is they have seen new species popping back around and in the river.

“What we were finding before were insects that were not bad, but just have a higher tolerance to poor water quality. So now with the higher quality water, we’re seeing more diversity,” she said. “More sensitive ones are starting to come back, but not yet the really sensitive ones.”

Those involved with the project referred to the bad layer that was under the water as schmutz. The layer, which was essentially nitrogen and nutrients from the wastewater, would block spaces so water couldn’t percolate down. Now, they said they have poked holes in the layer so that it’s not interfering as much. Zugmeyer said the nutrients were in such high quantity, they were severely impacting the river. 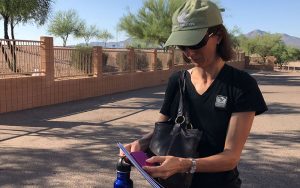 Claire Zugmeyer, an ecologist with the Sonoran Institute, gets ready to head down to the Santa Cruz River. (Photo by Courtney Mally/Cronkite News)

“We’ve removed a lot of those nutrients, too much of a good thing is a problem,” she said. “Before the upgrade, we weren’t seeing very many fish because ammonia is one form of nitrogen that’s really toxic in high concentration, so we’re seeing fish now.”

“The schmutz stack was an embodiment of all the nastiness that was generated by the poor quality water that was being dumped and the loss of it is sort of emblematic of this great change.”

He said another great result of the undertaking has been the Living River Art Project that local high school students have been participating in.

“That’s been one of the great wonderful surprises about the project,” he said. “That we could tie in a child educational component and that the kids would get so excited and that the poetry would be so good and inspiring to the rest of us.”

Canfield also said the project has helped get the word out to the community.

“As a parent, there’s few ways better to get my attention than the things my kid brings home from school and get excited about,” he said. 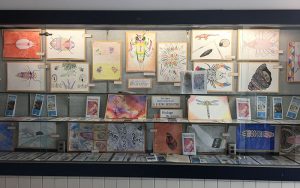 Marea Jenness, a biology teacher at Tucson High Magnet School, started this project with her students as a way to connect the arts and sciences. After studying the subject, students take a field trip to a portion of the Santa Cruz River, where they observe and interact with the environment.

“This art project enables me to weave another strand into my teaching about biology because one of the most important skills to teach as a biologist is observation,” Jenness said. “When you do biological drawing, it makes you focus on your observations and you make much better observations.”

She said the projects lean sometimes more toward traditional art and other times more like clinical presentations, but that students are constantly surprising themselves with their talent and the inspiration they draw from the river.

In the time she’s been going to visit it, she said she’s also noticed changes to the area.

“It’s getting greener, it’s getting more grown in,” Jenness said. “The water is healthier, we find all kinds of macroinvertebrates in there.”

The river currently has a good flow, but during monsoon season it can get flooded after a big storm. This isn’t necessarily a bad thing, Claire Zugmeyer said, and she can still see improvements on days when it hasn’t been raining.

“Fortunately, a lot of the vegetation has adapted to that, so they just lean over and pop back up after the water is gone,” Zugmeyer said. “On a normal, non-storm day, the water is much clearer now than it was before the upgrade.”

Zugmeyer said their work isn’t done yet, but the middle stretch of the river, which was once mostly abandoned, is now a valued community amenity.

“We’re building on the Living River reports by finding out what people value about the river, what they know and where they go, what they want to see, what their concerns are,” she said.

She added she wants the community to come out and see the river and enjoy it.

“The Santa Cruz is the reason we can call Tucson home,” Zugmeyer said. “The river has a lot of personality, so you have to go exploring to get to know it.”