Supporters of the 1.35 million acre Bears Ears National Monument said the area in southern Utah holds important historical and cultural artifacts for tribes in the region, including the Navajo and Hopi. (Photo by Josh Ewing/Bears Ears Coalition) 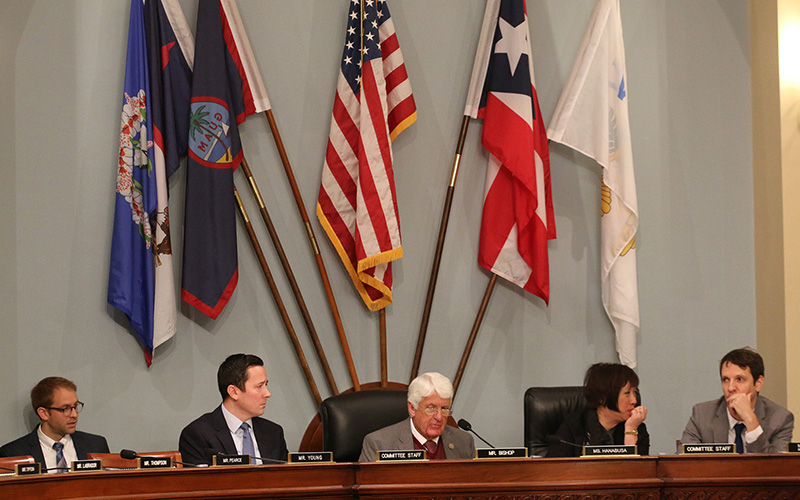 Rep. Ron Bishop, R-Utah, center, has long pushed for a reduction in the size of the Bears Ears monument, saying local residents agree. But others accuse the monument’s critics of “cherry picking” voices. (Photo by Kyley Schultz/Cronkite News) 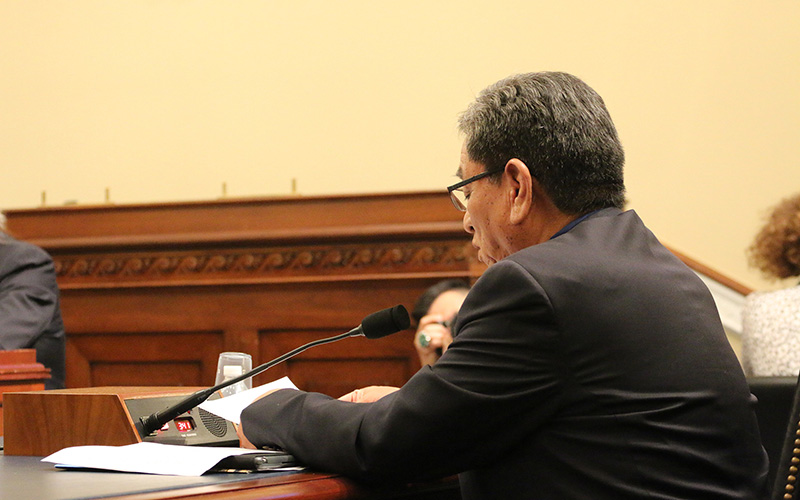 Navajo Nation President Russell Begaye joined leaders of other tribes who told a House committee that a proposal to shrink the new Bears Ears Naitonal Monument ignored the will of tribal governments. (Photo by Kyley Schultz/Cronkite News) 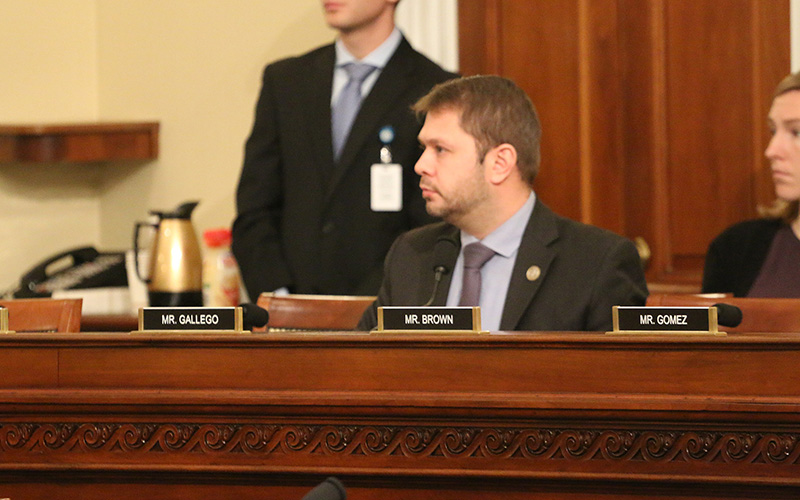 Rep. Ruben Gallego, D-Phoenix, said it was a “shame” that supporters of a bill to reduce the size of Bears Ears did not talk to affected tribal governments – a claim the bill’s supporters vigorously dispute. (Photo by Kyley Schultz/Cronkite News)

WASHINGTON – Leaders of five tribes accused lawmakers Tuesday of “cherry-picking” tribal members to support an 85 percent reduction in the Bears Ears monuments, and said proposed tribal management of the new monument would be in name only.

The testimony from Navajo, Hopi and other leaders contradicted lawmakers from Utah and some local tribal officials. They said plan to reduce the size of the 1.35 million acre monument designated by President Barack Obama in 2016 – and reversed by President Donald Trump in 2017 – was a response to a grassroots movement from tribes in the area.

“If you want the best results, you need to look at the local response, which is that they don’t want this monument as big as it is,” said former Rep. Jason Chaffetz, a Utah Republican who testified before the House Natural Resources Committee Tuesday.

“National and local tribes and Utahns know the culture is rich in history, but it is vital we get the structure and management right,” Chaffetz said. “This bill allows for increased ability to have tribal communications and an increase in participation of tribal management.”

But leaders of five tribes from the region dismissed those claims, calling the plan to reverse the monument designation a “gross overreach for personal and private interests” that want to open the lands to development.

“The Bears Ears Monument is of critical importance, not only to the Navajo Nation but to many tribes in the region,” said Navajo Nation President Russell Begaye.

“The monument would be created by Trump appointees with consultation of the Utah delegation, who cherry-pick only a fraction of actual tribal members to be on a council,” Begaye said. “The ‘tribal management’ depicted in this bill is tribal in name only.”

Carleton Bowekaty, a Pueblo of Zuni council member, said the proposed reduction in the size of the monument “desecrates much of the sacred land our ancestors cherished.”

All the land in Bears Ears was already owned by the federal government, but supporters said the monument designation was needed to protect important natural and cultural sites. But critics called it an overreach by the president that ignored local residents’ desires.

Besides slashing the footprint of the monument, the bill also creates the Shash J’aa Tribal Management Council of tribal and local officials to oversee the new monuments that the bill’s backers said will give needed local and tribal control.

“By supporting H.R. 4532, you are listening to a group who has been silenced for too long,” Benally said in her testimony. “The grassroots efforts in San Juan Country stand up for the old and the new, and I’m disheartened for current tribal members to discredit grassroots efforts to stand up.”

But other witnesses said the new management council would replace legitimate tribal voices with officials handpicked by local tribal members.

“Nothing about this council reflects actual tribal management,” said Tony Small, a member of the Ute Indian Tribe’s Business Committee. He testified that the local tribes that would be represented on the council are “simply private citizens expressing their opinion. They do not represent the view of the federally recognized tribal governments.”

Rep. Ruben Gallego, D-Phoenix, urged lawmakers to listen to the officially represented tribal councils, rather than local residents and lawmakers.

“We need to listen to the duly elected representatives who were chosen to speak on behalf of their tribe and we need to uphold a democratic process,” Gallego said. “We need to really understand what is at stake here.”

“We’ve had well over 1,200 meetings over the course of four years discussing the potential monument and tried multiple times to keep in open contact with tribal officials,” he said. “Simply speaking, 1,200 meetings should have been sufficient to have an open dialogue.”